This list, Dear Reader, is a paltry drop in the bucket of titles issued by Criterion, Kino Lorber and Arrow Video, who are collectively the titans of reviving classics on Region 1 Blu-rays.

Unless we’ve taken leave of our senses, we can’t let these go unacknowledged. It’s just that we’re prejudiced in favor of films we hadn’t seen before or never in such spectacular shape, and that explains our ten choices below. Also, Kino Lorber has issued one of the greatest fantasies of the 1940s, Thorold Dickinson’s The Queen of Spades (1949), but we haven’t written about that yet — stay tuned. 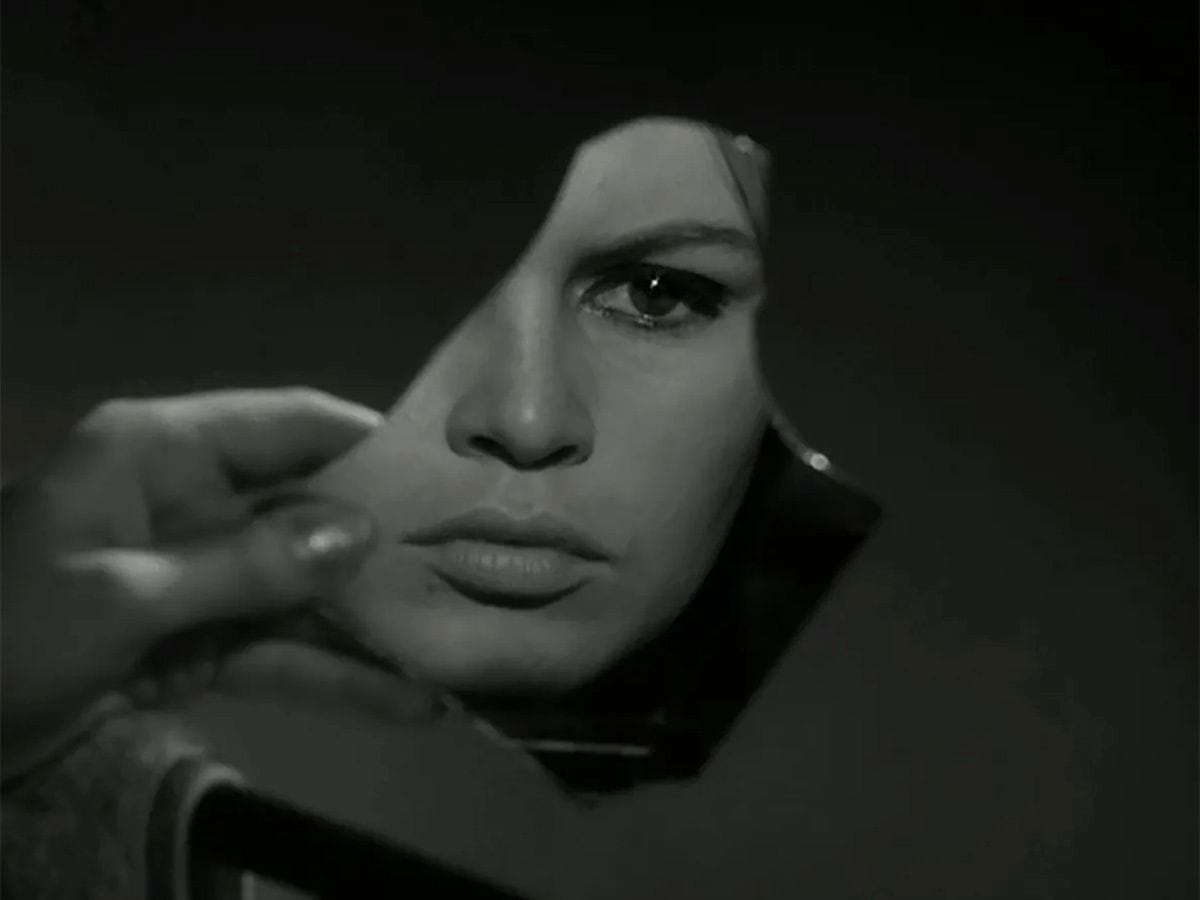 Clouzot wanted to make a movie about the legal system in order to show that it’s not possible to judge people’s actions or to summarize their character effectively in such a forum. He’d written a script for Sophia Loren when he was approached by Brigitte Bardot’s producer, Raoul Lévy, who asked him to use Bardot instead. Clouzot states that he wrote an entirely new script tailored to her personality and reputation, in which she plays a woman accused of killing her lover, a woman in the process of being torn apart and sensationalized in the tabloids as a murderous hoyden.

In other words, what makes this example of “l’amour fou” work as cinema is that it’s really about the public image of Bardot the icon. At every point, the analysis of the heroine can be confused with an analysis of the star playing her, and Bardot’s naked performance (sometimes literally) encourages such confusion. 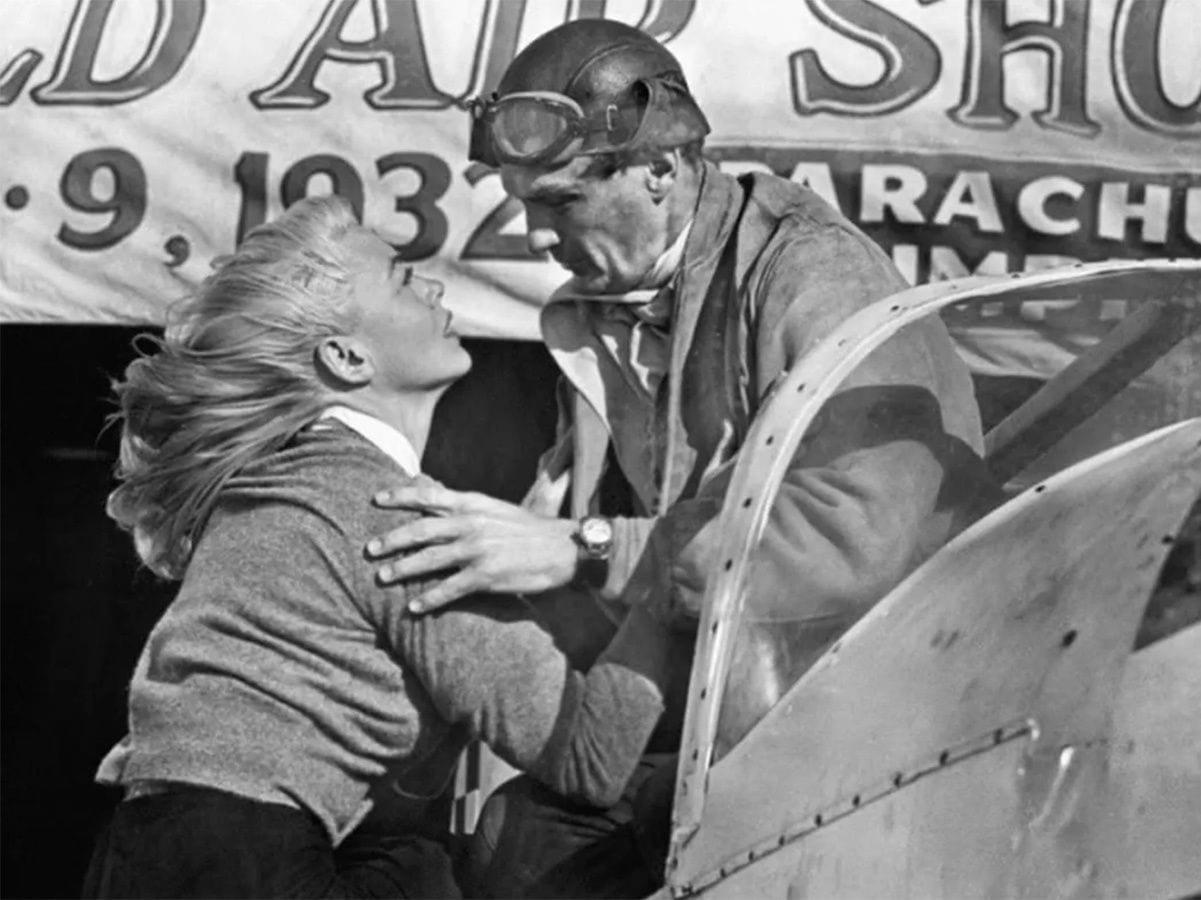 The Tarnished Angels is a paradox. It’s highly Sirkian, yet it hardly resembles the glossy Technicolor soaps that made his reputation and were generating so much box office. It feels deglamourized by the standards of late Sirk, partly because this production is in black and white. But oh, what lovely black and white

The Tarnished Angels is not only among Sirk’s best films, it’s among the best films of its entire main cast: Rock Hudson, Robert Stack and Dorothy Malone. The movie is not really about its story but the fug of yearning and despair wafting off every character, what historian Imogen Sara Smith in her commentary calls the movie’s “aching melancholy and desolate beauty.” 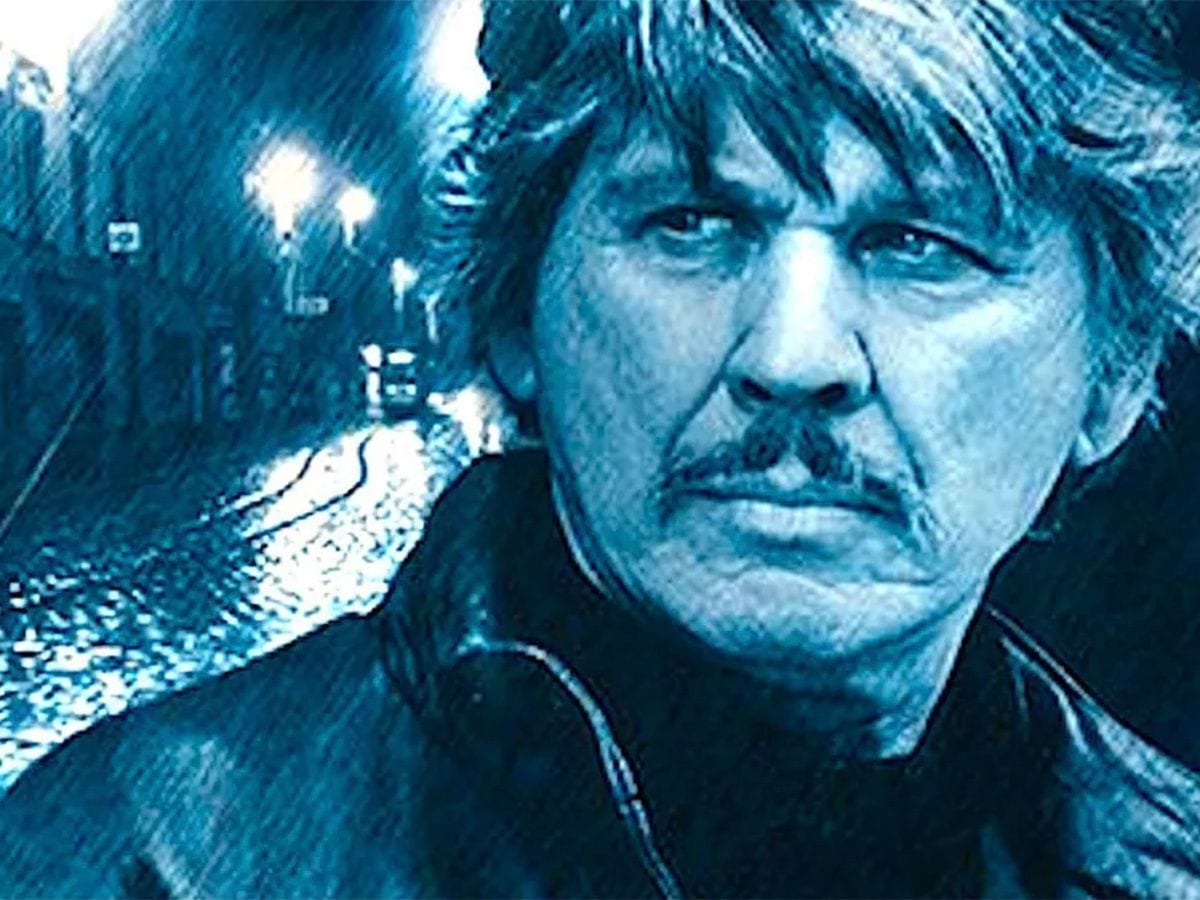 Rider on the Rain kicked off a final string of four terrific thrillers from director René Clément. In the ’60s, Clément turned to co-productions that threw together stars of various nationalities and aimed mainly at the English-language market. The film headlines Charles Bronson, yet it’s not really his character’s story. The audience’s point of view aligns with its heroine, Mellie Mau (Marlène Jobert).

Bronson enters the picture as the enigmatic Col. Harry Dobbs, an almost supernatural figure of menace and mercurial emotion. Literally every man Mellie meets is some kind of threatening bully who patronizes or infantilizes her or worse. Dobbs functions as a mysterious doppelgänger of both Mellie’s attacker and her husband. Is he more one than the other? 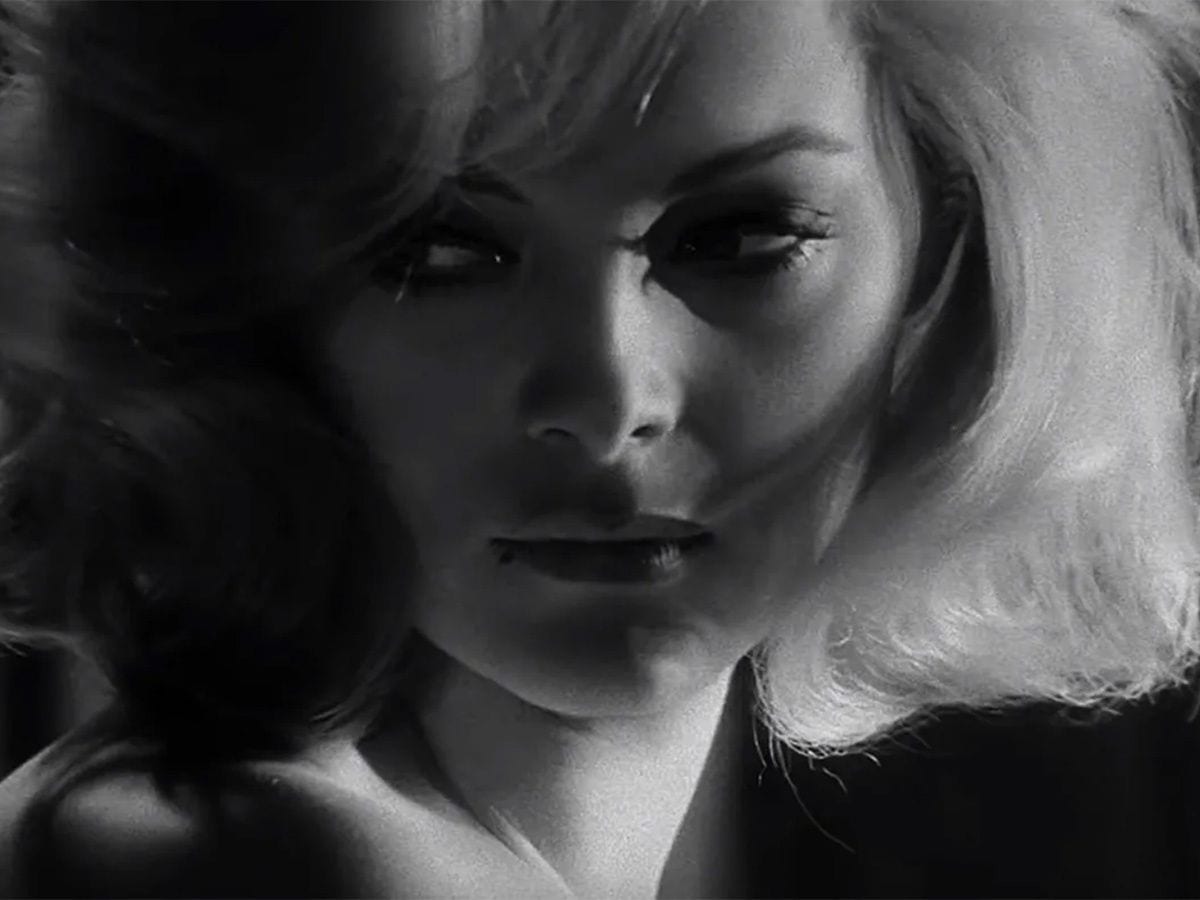 The Possessed is two movies. Or, to extend the title’s Dostoyevsky reference, it’s a movie and its double. The two versions (Lady of the Lake, the Italian-language version, and The Possessed, the English-language dubbed version) tell subtly different stories, or with a subtly different tone, even though the footage is identical.

In short, both films lead us through the same visual labyrinth to deposit us at opposite epistemologies. There are several shots where a pacing Bernard (Peter Baldwin in The Possessed) precedes his mirrored reflection, or vice versa, and the two versions of this film similarly favor one form of certainty over the other. Apparently English viewers need more truth spelled out while Italians wallow in ambiguity. 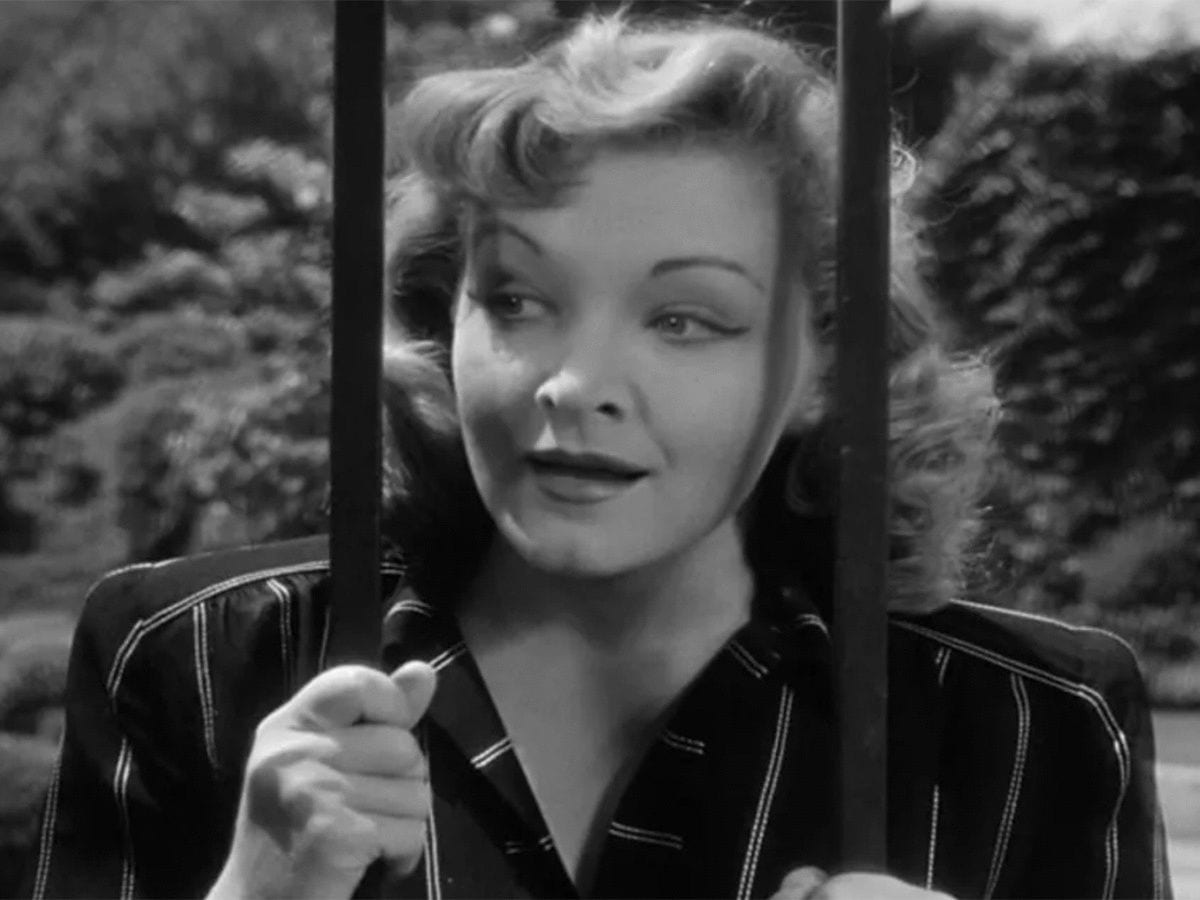 In a snappy, no-nonsense, claustrophobic 65 minutes, My Name Is Julia Ross seamlessly combines noir with the women’s film and gothic suspense tropes, along the way making a fine showcase for star Nina Foch, who became a profound influence in postwar Hollywood as a teacher.

In short, this plot belongs to the postwar trend in what we now call “gaslighting”, as someone — usually a woman — finds herself boxed in and patronized by a conspiracy that just looks like normal society’s desire to clip her wings. The impression is that life itself, or at least the culture you live in, is enough to drive you mad. 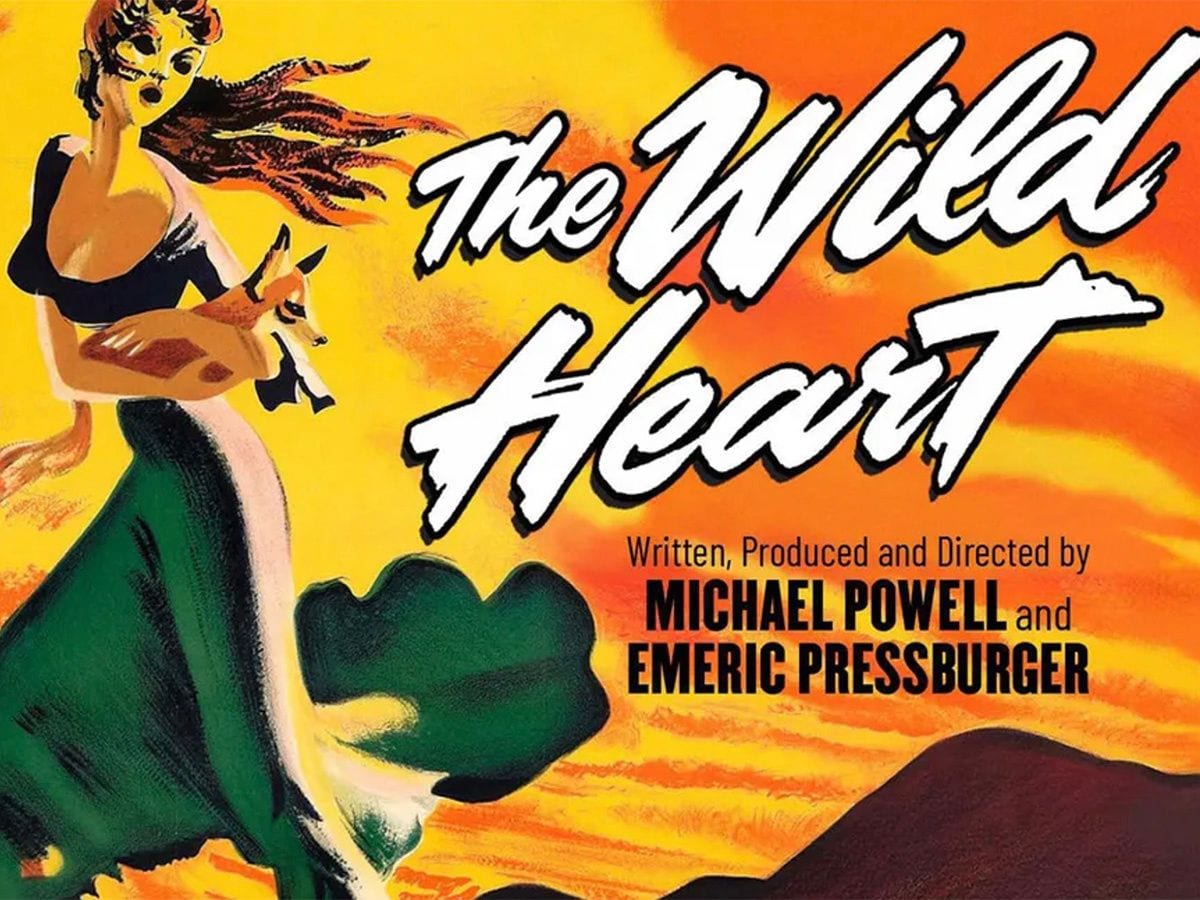 Whether you’re watching Michael Powell and Emeric Pressburger’s Gone to Earth (1950) or in its much shorter US version refashioned by David O. Selznick as The Wild Heart (1952), you can’t help being struck by the cold wind of foreshadowing from the very first scene. This is an impudently symbolic and stylized movie, every shot conceived for ravishing Technicolor, every scene constructed with glorious artifice, every line rich with meaning and foreboding.

Its supernatural and philosophical complications and ambiguities explain why Joseph Cotten’s narration, layered over the opening of the Selznick version, attempts to reduce this story’s complexity to a simple morality tale of a “pagan” woman who refused Christian ways and reaped what she sowed — something Americans could understand, apparently. 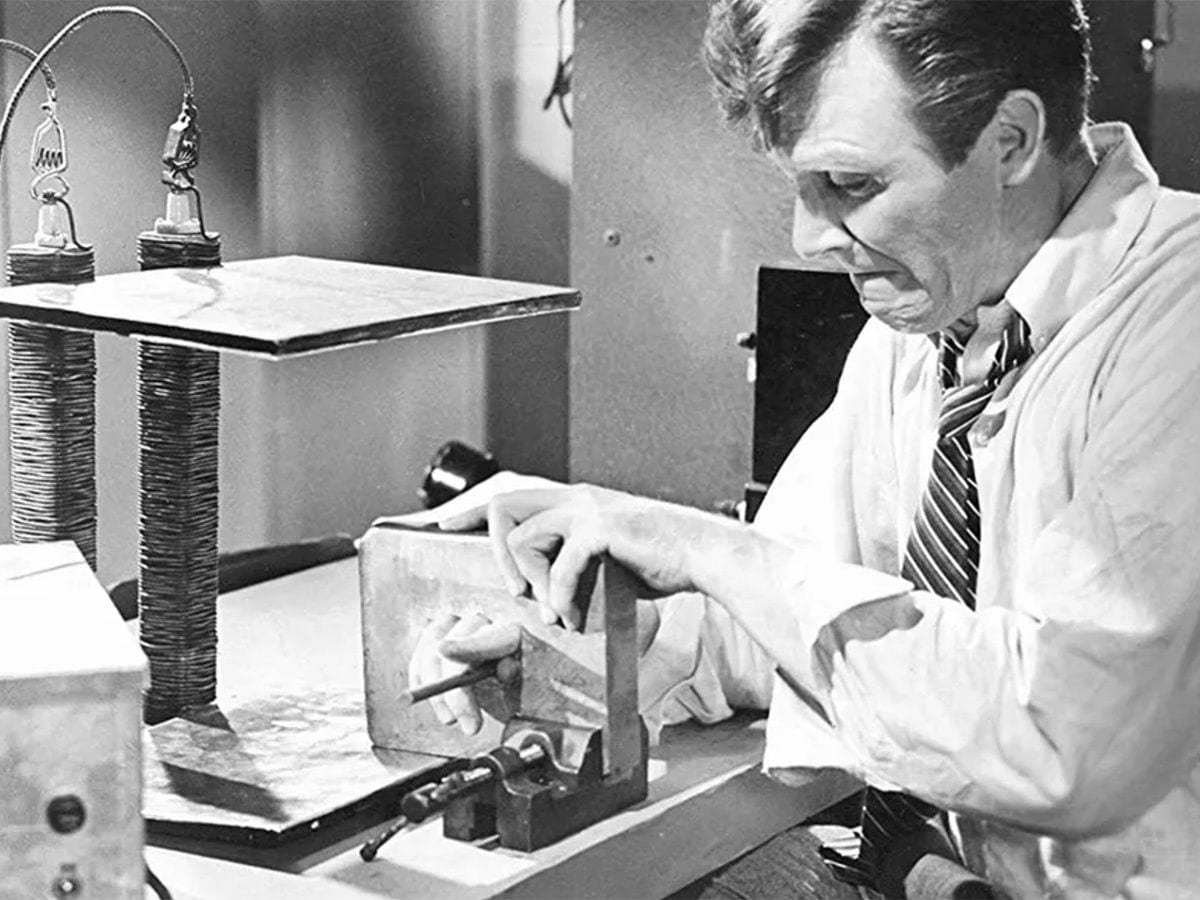 4D Man enacts American society’s love/hate affair with science. It is stamped with brilliance. My childhood viewing convinced me of its chilling poignance, and here’s one case where adult viewings only expand one’s appreciation.

Ralph Carmichael provides the most obnoxious “crime jazz” score in film history. Horns begin blaring inappropriately from the opening moments and, just when we’ve managed to forget them, they come blasting in at random points throughout. Maybe they’re what finally drives our hero insane. 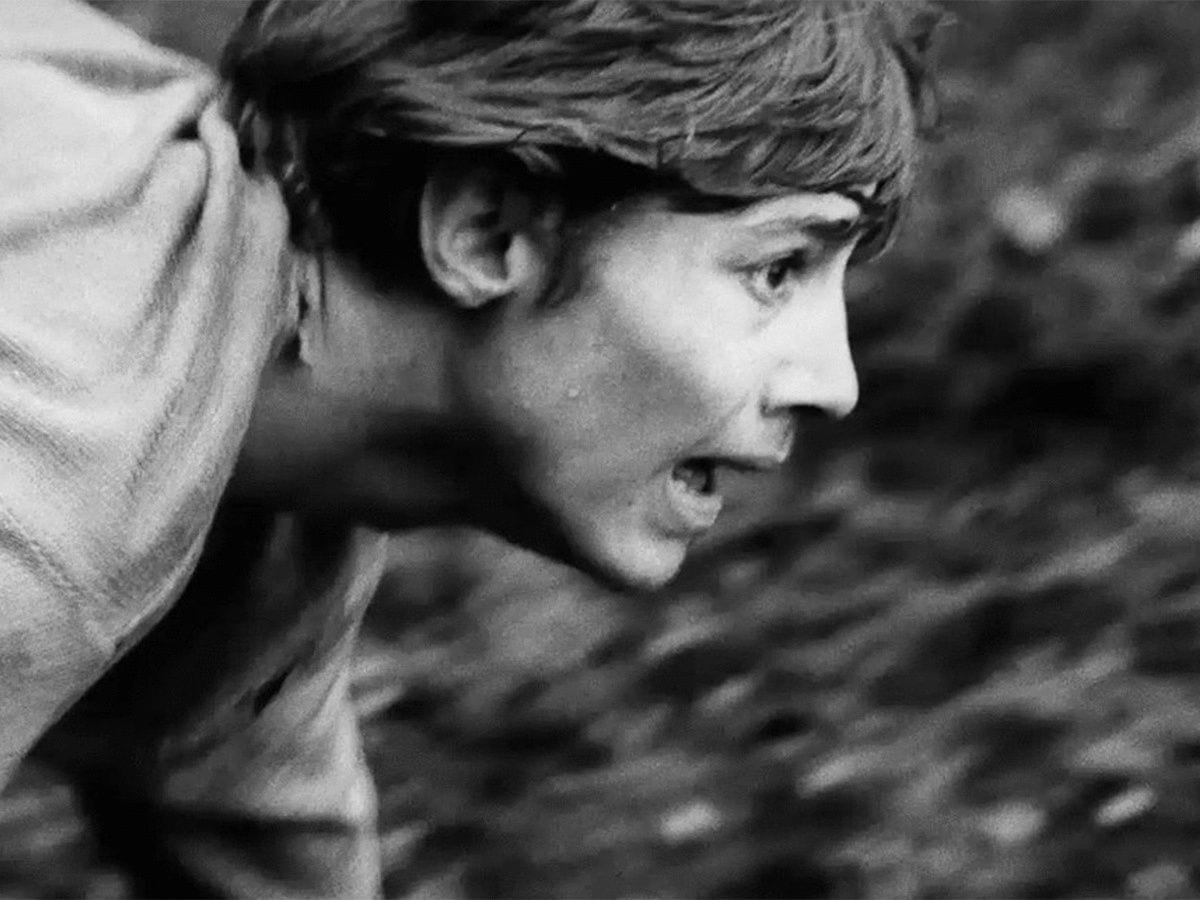 Diamonds of the Night announced itself in 1964 as what it remains: a key early film of Czechoslovakia’s New Wave and a hard, shiny, multi-faceted gem that flashes in the mind without giving away its essential secrets — and that’s part of its secret. It’s not only possible for audiences to emerge from this movie without a clear idea of what happens in it, it’s virtually required.

At a certain point we must wonder how much of what we see in the woods is reality. Is this all an allusion to Ambrose Bierce’s 1890 story, “An Occurrence at Owl Creek Bridge“, hallucinated in the mind of a dying man? We’re left with existential terror. 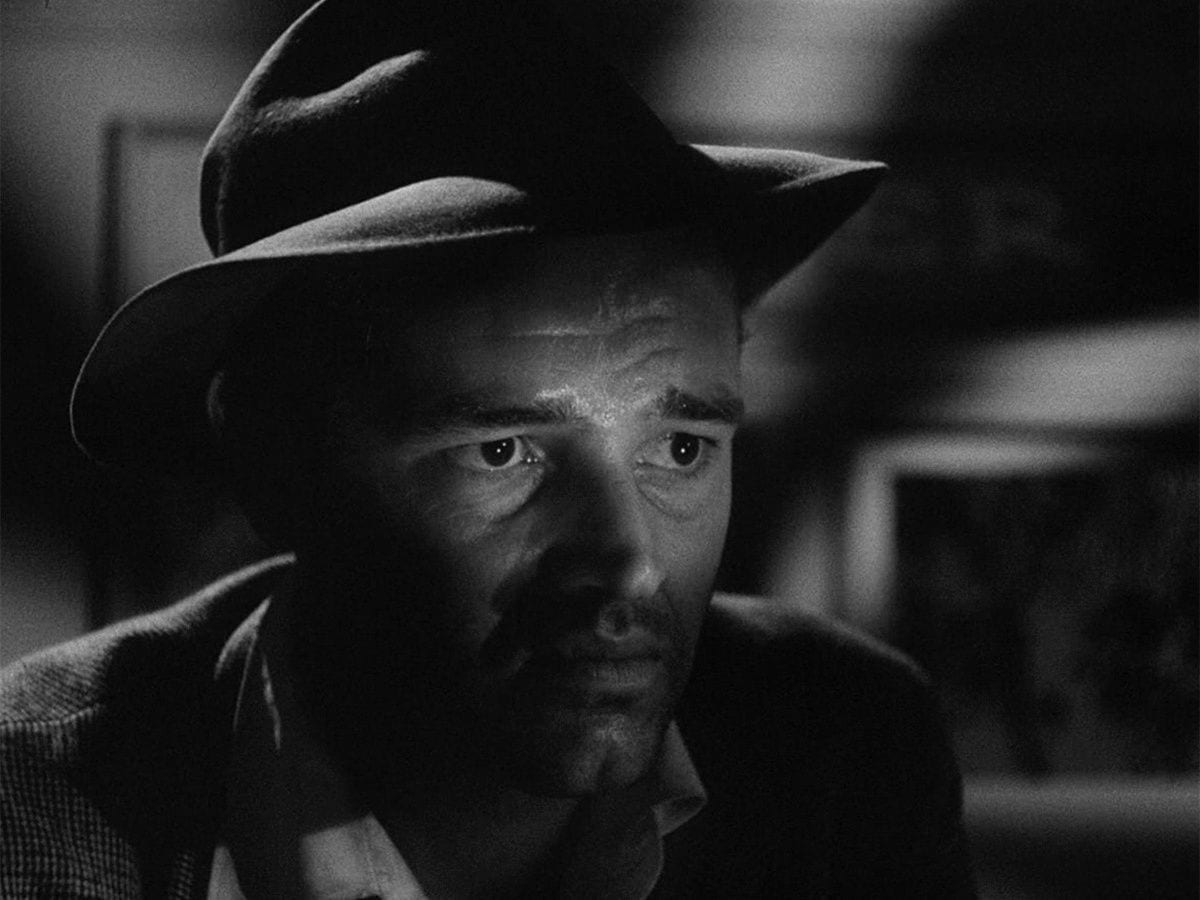 Detour begins in black night, with disheveled Al Roberts (Tom Neal) walking like a zombie, illuminated in the headlights of a passing car to which he pays no attention. In the next shot, he’s been picked up as a hitcher, and now he speaks like a zombie as well, or a monotoned sleepwalker pulling the words out by effort. In close-up, his face shifts in non-realistic, expressionistically shadowed lighting, as though indicating he’s in Hell.

We won’t spoil the joys of discovering the events that transpire in a lean movie running under 70-minutes, although we’d be remiss not to mention the truly extraordinary turn by Ann Savage as another hitchhiker, Vera. She embodies the harshest depiction of a hostile, relentless, mocking woman in the genre, and she perfectly suits Al’s sour demeanor. 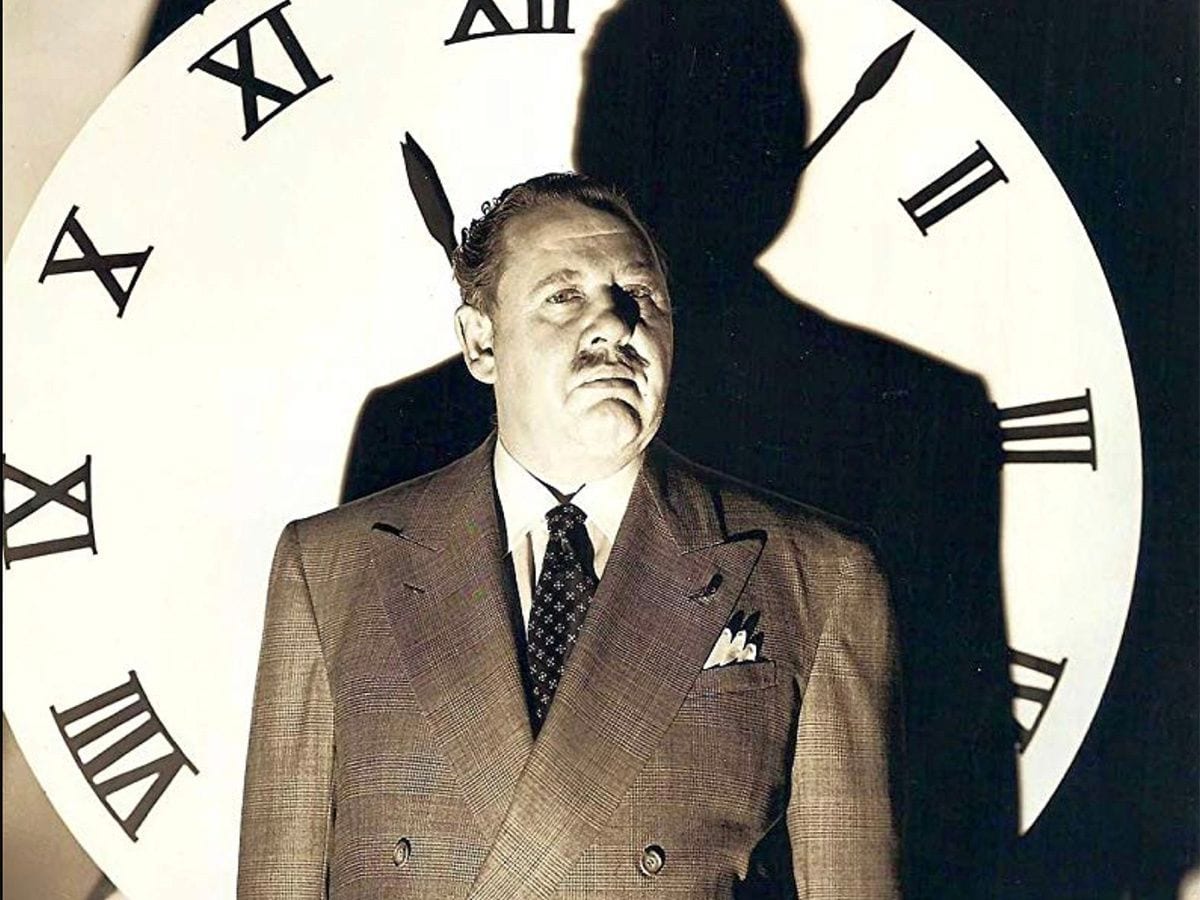 Charles Laughton as Earl Jonath in The Big Clock (IMDB)

We could say this picture’s all plot, but what a plot. The ingenious, nail-biting story doesn’t unfold in real time, but the emphasis on time and clocks almost makes it feel as if it does. Indeed, two of the movie’s personalities are obsessed with real time: Earl Jonath, the character played by Charles Laughton, and director John Farrow.

With its absurd cross-purposes and increasingly frantic pace, The Big Clock resembles a noir film as it would be constructed by Preston Sturges. If ever a Hollywood suspense script could be called brilliant, The Big Clock is it, flat-out and with bells on.