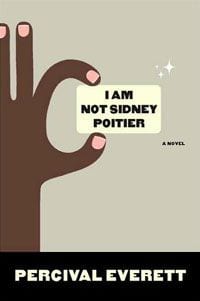 Everett sets the perpetually baffled Not off the critical image of Poitier as the “Most Dignified Figure in American Culture” (according to the book’s imaginary Harry Belafonte) and generic reference point for all black actors. He also uses the roles Poitier played to tease out a twisted alternate history of African-American men that can be misleading and simplistic, yet can also hint at more complex relationships beneath their surfaces. That Everett writes about all of this with such a suave touch – biting without being obnoxiously didactic – makes for a powerful voice and surprising storytelling in a book about the beauty of unpredictability.

A lot of fun word play is had with the word “not”. By saying Not is not Sidney Poitier the reader is tempted to compare him to Sidney Poitier just as the characters do, when the author is pointedly saying that we shouldn’t. The absurdity inherent in defining someone by what they are not (an infinite number of things) coupled with the possibility that nobody is ever truly ‘not’ something — that there are no dualities and that something is contained in everything — makes for a heady comedic juggling act .

Not Sidney Poitier is also a very wealthy young man. His mother died when he was young, but left a vast fortune due to her prescient early investment in Turner Communications Group. Not Sidney Poitier is sent to Atlanta to live with Ted Turner, an hilarious and enormously likeable comic creation who calls Not “Nu’ott,” speaks in non sequiturs (“What is a smithereen?”), and who sometimes offers advice but is very careful that their relationship not mirror the “model of the black child being raised by some great white father” as with that “kidney-sick little boy” on TV.

Ted and Not’s relationship is not quite what we expect it to be. Though they like each other and have a healthy relationship, others are skeptical of it. Not’s teacher Betty warns him about Ted being a “pestilential, poisonous, pernicious parasite”. Once Not sets off on his own, the idea of his being expected to play certain roles is expanded. The book is at root about the different roles and clichés forced onto black men and the alienating affect it can have when it is difficult for anybody to define themselves anyway.

When Not first tries to leave Atlanta he is wrongfully arrested in Peckerwood County, put onto a chain gang, and then escapes with a bigot, Patrice, who looks like Tony Curtis. Though Not is acting out the plot of The Defiant Ones, it becomes clear that he will not come to that movie’s conclusion. He does not befriend his fellow convict or open Patrice to racial tolerance. Not decides to leave Patrice and two others sleeping by railroad tracks since “they would never be going anywhere” and he seems to be rejecting the simplistic tropes of the white/black buddy movie than the people around him.

During this same chapter, Not drifts in and out of a dream where he plays Poitier’s character in Band of Angels, a Civil War-era drama about a mulatto woman who passes for white and shacks up with Clark Gable. In each chapter Everett frequently has Not enter into these dream reveries. They are the obscure B-side to the more mainstream Poitier movie mimicked in the main storyline. (Everett also references No Way Out and Buck and the Preacher in later dream sequences.) The dreams present these films as containing stickier truths about their characters than the often simplistic dualities of Poitier’s more popular Hollywood efforts (and the comic caricatures in the book’s main portions).

Not returns to Atlanta and enrolls at Morehouse College, a lengthy and vastly entertaining episode, where he gets hazed by the famed Omega Psi Phi fraternity, attends a lecture by a fictional Bill Cosby (who berates young black men for being “pathetic” while peppering his speech with shouts of “pound cake” and “pudding pops”), and worries that higher learning might be an expensive waste of time.

For advice he turns to his professor, named Percival Everett, who teaches a Philosophy of Nonsense class. (The real Everett teaches at the University of Southern California.) Everett, the character, is a kindred cousin of Ted Turner and it’s not clear if the non-advice he offers Not stems from his refusal to constrict the world through definition or if he doesn’t know what he is talking about. Everett here pokes fun at the author’s refusal to pin him down or say anything concrete under the guise that he is merely trying to represent reality.

He is also tying himself into the larger themes of identities that resist classification. The examples of Everett and Turner indicate that attempting to make any sense of yourself, especially how others define yourself, leads to madness. Life is like a Marx Brothers movie, and the best way to stay sane is to bubble along with the insanity.

Later Not travels to Washington DC and acts out Guess Who’s Coming To Dinner with his Spelman girlfriend’s light-skinned black family. Confused by their snobbish hierarchy of skin color, wealth, and class-defined prestige, Not phones Everett for help. He tells him to screw with their heads. “Listen, just remember that nothing puts you at an advantage like knowing what someone is thinking when they don’t know you know what they’re thinking.”

Everett, the author, seems to indicate that the quest for the self is a fool’s errand destined to leave one spinning in circles. But, like Everett the teacher/character, he doesn’t offer any real sage advice or an out for Not Sidney Poitier. The Sidney Poitier of this book is just a collection of roles, containing truths and stereotypes and simplicities and a mess of contradictions, not unlike Not.

Everett, the character, shows that he can be perceptive on the details. On how to say “They call me Mr. Tibbs”: “Say it as if a crab is biting your ass, as if someone is peeling an unpleasant and undesired memory from your core, as if you’re feeling a little bitchy, as if you might be gay but even you don’t know.” But on the larger issues, he’s impossible. “And remember, be yourself. Unless you can think of someone better.”