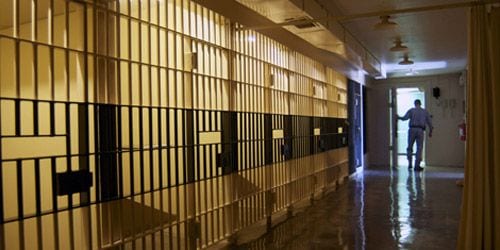 “You see the news crews and you go, ‘Oh, I didn’t know anyone was being executed tonight.’ Then you just go on serving the pepper fried steak.” The Huntsville, Texas waitress who offers up this anecdote appears just once and anonymously, near the beginning of Explorer: Inside Death Row. She smiles as she speaks, though it’s unclear why. She may be aware of what seems a disturbing incongruity in this story, that executions are so routine here that they go unannounced. She may fully support the practice, like the other residents interviewed here, and so see no strangeness at all. Or perhaps she’s just self-conscious that a camera crew has arrived in her diner and asked how she feels about having the state’s death house just a few minutes down the road.

In any event, the waitress’ reaction is an apt starting point for the documentary’s look at the many effects of The Walls, the Huntsville Prison Unit that carries out all executions in Texas. The unit has been busy: as narrator Peter Coyote reports over images of crude grave markers and backhoes digging holes, that since the death penalty was reinstated in 1976, “Texas alone has accounted for 35% of executions in the United States.” The death house is only one component of what locals call “Prison City” (also home to the Texas Department of Criminal Justice), but it is the most notorious.

Though “no condemned men are imprisoned” at The Walls, Coyote says, “They live in the constant presence of the Death House.” The facility is expanded and modernized from the 1924 version — which was comprised of an electric chair down the hall from 10 cells, where inmates awaiting death “were able to smell the execution and what went on” — but it’s still an awful place to be. The camera emphasizes their short time and physical limits (inside 6′ by 6′ cells, 22 hours a day) with tight frames and uncomfortable close-ups, even shots of their bodies, on gurneys or a coffin made of wood and cardboard, attended by precious few mourners. “For the 329 men on death row,” intones Coyote, “the only number that matters is how many days they have left.”

The documentary follows the experiences of three inmates during their last few weeks before execution. Each has been convicted of a brutal crime, but while David Martinez is plainly sorry for the night he drunkenly beat his girlfriend and her son to death with a baseball bat (and even looks forward to ending his stint on death row, which he describes as “not even an existence”), Johnny Ray Johnson is less certain of his fate — and his past. Convicted of raping and murdering a crack addict, he frets as he recalls what happened. “I’m innocent of this crime, seriously,” he says. Advising his questioner to look closely at his mug shot (which helpfully appears on screen, taken some 12 years ago), he asserts, “That’s the person that I believe they must be prosecuting in my place.”

Here the program offers one of several arguments against the death penalty, in the form of an observation by lawyer David Dow, a professor at the University of Houston and director of the Texas Innocence Network. “For some of the people on death row,” he says, “What you are witnessing is a form of mental illness, you are witnessing an inability to absorb the injuries that they’ve caused, and so they adjust by saying that’s a different person.” As specific as this example seems, it’s also more broadly metaphorical and applicable. When Johnson remembers his trial — “The DA painted this picture of me being a demon, a demon that I’m not” — and is suddenly reduced to tears, the camera pulls back to leave him looking forlorn and blurry in his cell window. None of these “pictures” of him is likely complete or even especially accurate.

This corresponds with a larger point made by Inside Death Row, that the system of state prosecution, leaving the accused with under-prepared, under-funded or inept public defenders, is inherently flawed, what Johnson terms “the machine of death.” Martinez The film doesn’t even bring up the question of racism in this system, though the argument has been made repeatedly there are “problems with the death penalty in this country” regarding its imposition on minority offenders. Inside Death Row is focused less on revisiting these debates than it is on looking at the effects of their irresolution: people suffer, whether as victims of horrible crimes or as prisoners. The latter group is made up mostly of those Dow calls “abandoned” by “society,” abused by adults as children, victims of poverty and lack of education or opportunity: “The way I was raised,” says one inmate, “I wasn’t taught to use my mind to think.”

The program includes reflections on many sorts of pain, from victims’ relatives (“I never thought I could want somebody dead”), Walls warden Tom O’Reilly (“I’ve done over 100 executions,” he says, “After a while it becomes kind of meaningless”), reporters (“It is exciting that I have the chance to do this because right now, I feel as if I am acting like a type of history keeper”), young lawyers working on appeals (“Even knowing you’re gonna lose, you have to look yourself in the mirror and for no other reason than that, you fight”), and a former prison guard who escorted inmates to the death chamber (“You put yourself here, you shouldn’t a did what you did: it never did bother me”).

The most poignant story here may be that of 34-year-old Willie Earl Pondexter Jr.. who says he actually believes in the death penalty for “child rapists and serial killers who show lack of humanity lack of love for the human race.” Dow insists Pondexter was wrongly convicted and that he would let him babysit his child (“I have absolutely no hesitation in saying Pondexter could be pardoned tomorrow and would not be a threat to society”). Dow submits that Pondexter’s appeals and requests for stays and clemency are turned down because “The court was just repulsed by this crime.” Here a gun floats in abstract gray space, not precisely an evocation of that repulsion.

Inside Death Row‘s case against the death penalty is made repeatedly in images rather than explicit language. As much as victims’ families imagine solace in their legal revenge, the film stays focused on the grief of the state’s victims: a teenager who is only able to touch her father as a corpse, a “pen pal” who considers herself married to an executed man, and Mrs. Clay, who has served as a death row inmate’s surrogate mother for years. “The old Johnny was evil, he did evil things,” she says, declaring that some men can, in fact, be rehabilitated. “My sister and I are the only family that he has. For 10 years nobody had visited him, and that hurt my heart.” Her generosity — so simply put and so vast — is the film’s best argument against killing people.