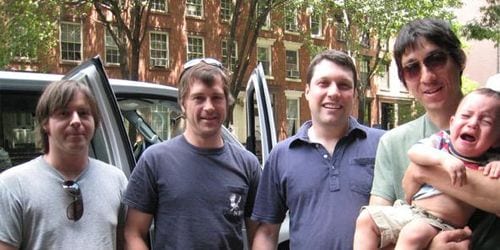 As far as pure rock bands go, Polvo is right up there at the top of the list. When they disbanded in 1997, they left us with an impressive discography — split between Merge and Touch and Go — that was as varied and menacing as it was consistently engaging and raggedly beautiful. Had they not come back and made a new record, their story in the rock world would still be a complete and vital one.

But after reuniting for some festival shows in 2008, they’re back with In Prism, and what a welcome return it is. More than just being a great rock band, Polvo also represents a certain kind of band — where egoless players get out of the way of their big sound and avoid affectations and pretensions — that has in some ways gone by the wayside since the mid-90’s. So it’s refreshing to hear In Prism and find these guys not just picking up right where they left off, but also improving on their distinct, bracing sound, bringing to it a maturity and confidence we haven’t heard from them yet.

Much of the band’s older work could be split between more expansive, snarling rock songs and terse, jagged guitar blasts. Exploded Drawing and Today’s Active Lifestyles found the best balance between the two, assaulting you with bending notes one moment, and soaring over you with crunching anthems the next. But In Prism finds the band firmly planted in the expansive side of their sound. Where before the elements — from guitars to bass to drums to even vocals — could all seem like jagged boulders crashing against one another, here the element do crash, but when they do they crack and leak and pool together, coating these songs in thick sonic layers. Guitars growl and snap on “Right the Relation”, filling big spaces over the clean, propulsive drums. Bass thumps along train-steady on “Beggar’s Bowl” while ghostly notes spin and fall over it, trying to pull away.

With all of these songs, it’s clear that not much has changed for Polvo, which actually makes the fresh sound of this record all the more impressive. Since their sound is so intricate, they don’t ever really need to reinvent themselves. But these songs are some of the most towering tracks the guys have ever made, with the players bravely bedding down in their noise-rock and spreading it out as far as it will go without ever watering it down.

“D.C. Trails” and “Lucia” are two of the longest tracks on here — and in the Polvo discography — and also two of the best. Both explore a subtler, moodier side of the band’s sound before they splinter off in just about every direction possible. “D.C. Trails” starts as understated, sun-drenched power-pop, with vocals high in the mix and gliding over a soft bed of guitars. But the quiet can’t last. The notes start to tangle and distort, the band beefs up the sound for a second before the track cuts out. But just when you think it’s over, they bust the song open into a chunk of thundering arena rock, complete with a brilliant and screeching guitar solo.

“Lucia” takes a path much trickier to follow, but no less rewarding. It starts with a ruminant and haunting space, notes echoing out into an abyss and voices nearly whispering through the void. But just when you give in to the space and float along in it, the song leaps into a lean, rock surge. The guitar and vocals still haunt, but the drums push them forward into an inevitable crash. When the song reaches its peak, guitars shimmering and drums driving, it is as infectious a moment as Polvo has ever given us. It’s huge but subtle, loud but still somehow gentle, and by all accounts a perfect meshing of the band’s considerable talents.

There are wonderful surprises like that throughout In Prism. The whole disc sounds familiar, like a logical next step for the band, albeit a decade-plus later. But it also feels fresh in every moment. You can feel the energy of invention, the sheer joy of rediscovering their sound and morphing it into something new, all over this disc. Along with the likes of Dinosaur Jr. and Mission of Burma, Polvo shows us the best way for a band to reunite: Because they have to. These guys had to get together and make music again. And it is that feeling of necessity that makes this stuff sound so vital. It’s not really surprising that Polvo came back with a strong record, but who knew it would turn out to be their best yet. Emphasis on yet.