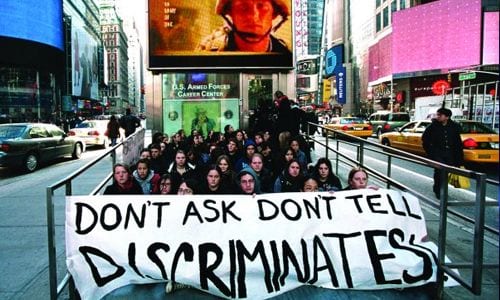 We should all just be plain ole Americans, right? And we could all just get along because we all have the same fair chances, right? Just consider how many men and women in service suffer in silence. In his interview given to YouthRadio.org, young veteran Joseph Christopher Rocha comes out about how during his Middle East war tour, he suffered everything from “being duct-taped and locked in a dog kennel to being forced to simulate oral sex with other men”. Reporting this targeted hazing — which then becomes a hate crime — means loosing one’s career. Ain’t that America. Y’all love that shit, doncha!

Think of it this way: These are the stories gay kids get to read about at their breakfast table while they’re figuring out how not to tell mom, how not to piss off dad, and how to stay outta trouble in school with other kids — because the first thing kids will say (even in the presence of adults whose silence betrays them), should anything go wrong, is “fucking faggot” (or, my personal favorite: “Sugar in his pants”). Girls might have some latitude, but by kindergarten, kids have plenty of hateful words used specifically to hurt and abuse them, too!

The terror queer kids face at school is still left comfortably inside the closet, and on this account, both mainstream gay advocacy groups as well as death worshipping zealots converge. Rather than extending Christian fellowship to these kids, many modern fundamentalists anchor their cause around rejecting gay marriage and hate crimes initiatives. They fall silent when asked where kids learn to hate so much. So, former president Clinton’s “Don’t Ask Don’t Tell” policy was already alive and well in the all-American school. It was already a learned behavior from childhood. All Americans know exactly what I am talking about, but nothing brings this closer to the heartland than hearing an adolescent say something like: “That’s so gay!”

What about the gay lobbying group the Human Rights Campaign? HRC is advocating for gay and lesbian military conscription. The HRC “is the battered wife of the Democratic Party establishment, and its time to walk out,” according to longtime outspoken activist Andrew Sullivan.

Not soliciting whores alongside his fellow seamen was enough to out Rocha, and the teasing, taunting, and humiliation ballooned from there. “It made me feel that I was an animal, and the fact that this was done to me by my highest leadership in the United States military and the American military — a representative of the US government — was daunting to me.” It was not hazing, intended to bring a new trooper into the fold. This was a plain hate crime, and we ought to call a spade a nasty bastard and not retire him and his flock, but, think of more critical ways to… naw, just discharge him on the exact same terms as they discharged Rocha!