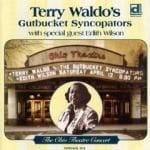 By the time pianist and bandleader Terry Waldo and the Gutbucket Syncopators took the stage at the Ohio Theatre in Columbus, Ohio on April 13, 1974, ragtime had been in existence for the better part of a century, but had long since been replaced by those sub-sects of jazz that sprouted up from its roots. Many of those offshoots — swing, bebop, cool — had also fallen out of favor, having been replaced in the minds and ears of many Americans by rock ‘n’ roll. Why, in the midst of a world dominated by Led Zeppelin, Neil Young, the Rolling Stones, Eric Clapton, and a handful of other classic-rock pillars, would anyone organize a concert to blast out music that had long since seen its prime, or even still maintained a thread of relevance?

Because these tunes — in the style of ragtime, stride, traditional jazz, Dixieland, whatever you wish to call it — is simply some of the most uplifting music ever recorded: timeless and plain old fun. It’s almost impossible to listen to this and not smile, tap your foot, or just feel a little bit better than you might have before you turned it on.

The second Delmark release by Terry Waldo and the Gutbucket Syncopators, The Ohio Theatre Concert, features 19 tracks of pure, unhinged good-time music and includes seven spectacular cuts featuring special guest vocalist Edith Wilson. From start to finish, this disc maintains an infectious energy that recalls the earliest of days when this music served as the soundtrack to barroom brawls and girls prancing on pianos, before it spawned dozens of dance styles.

After a pleasant opener, “Some of these Days”, drummer Wayne Jones takes the lead vocal on “I Would Do Anything for You”. Coming in behind the band with a cheery vocal past the two-and-a-half-minute mark, Jones closes out its final minute and a half with two charming verses followed by a detonation of joyful, rollicking clarinet, trumpet, and trombone. “The Letter”, an upbeat number driven by Bill Morhead’s scraping banjo and Mike Walbridge’s bottomless booming tuba, features a melody and bridge that many music fans will pick out as a pop favorite — here it’s filtered through Roy “Swing Chops” Tate’s brazen and brash muted trumpet, offset by the sweet buzzing vibrato of Frank Powers’ clarinet.

“Maple Leaf Rag”, originally published in 1899 by Scott Joplin, receives a well-executed reading by Waldo where his fingers playfully bounce up and down the piano. He plays with the true mark of a bandleader who would have been playing this music in its prime, with the knowledge of a musician who was equally adept at trumpet, tuba, banjo, cello, and bass, understand the tone, expressiveness, and role of each within a band. Waldo even takes the lead vocal on “How Could Red Riding Hood?”, a delightful take on the classic children’s story.

But it’s on tracks nine through 15 where the spirits are raised to another level, marked by the appearance of guest vocalist Edith Wilson. Wilson was the second African-American woman to record, making her first record with Johnny Dunn’s Jazz Hounds in 1921 (following Mamie Smith’s 1920 recordings and predating Bessie Smith’s cuts in 1923). She takes the stage at this concert 53 years after her debut, tearing through “My Man Ain’t Good for Nothin’ But Love”, “Am I Blue?”, “St. Louis Blues”, “I’m a Great Big Baby”, “Black and Blue”, and two others with unrelenting vocal dynamics.

No recording of this kind would be complete without including Joplin’s “The Entertainer” — the theme to The Sting to some, the “ice cream truck” song to others — but to all, one of the most recognizable and beloved pieces of music in any genre, among any generation. Waldo nails it with precision and poise. And that’s how these musicians played — with precision and poise — but also with reckless abandon and unbridled enthusiasm. Listen to The Ohio Theatre Concert to clear up any doubts.