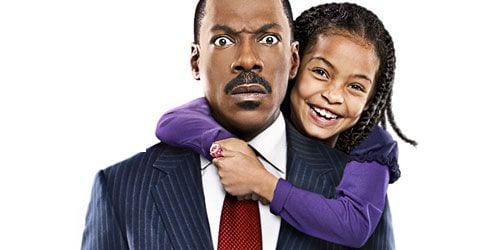 Actors are chameleons. Whether they’re shooting a movie, on a stage, or answering questions from the press, an actor always has to adapt and adjust his or herself accordingly. It’s all about image, and Eddie Murphy knows how to manipulate his image perhaps better than any other actor. Partially because of his repeated refusals to be interviewed, Murphy controls his public appearance almost solely by the films he chooses.

His story is well-known. During his early career, he was a straight-up comedian. His stand-up was filthy, but also flat-out hilarious. Then he became a movie star thanks to 48 Hours and Beverly Hills Cop. Following a few box office flops as well as some less than favorable personal experiences, Murphy had to find a new self for his public to adore. Thus was the birth of the family man.

Along with his fellow former Saturday Night Live cohort Mike Myers, Murphy started earning the big money again after Shrek and its sequels captured the hearts of children everywhere. Now, he’s stuck. His few stabs at films outside the PG-genre have been critical and box office flops. His one good shot at breaking out was shut after he lost at the Oscars, an upset some attribute to Murphy’s appearance in the critically-panned Norbit. Whether it was shame or greed, Murphy went running back to the family films.

His latest, Imagine That, superficially appears to be another cookie cutter version of his previous efforts. A deadbeat dad is forced to get more involved with his daughter when her imaginary friends provide great investment tips. Murphy has to learn a little humility while his daughter, played quite well by newcomer Yara Shahidi, overcomes her own common childhood fears (her imaginary friends help her cope with her parents’ divorce).

It sounds pretty standard, doesn’t it? Well, as it turns out, not exactly. The premise is ripe for expensive special effects or some sort of alternate animated universe, but director Karey Kirkpatrick keeps everything in a sharp, sometimes harsh version of reality. The scenes where father and daughter disappear to her imaginary land are shot just as the father sees them and just how they actually happen.

If this sounds boring, I promise you it’s not. It’s actually extremely refreshing and subtlety enjoyable. They use the device to embarrass the father, as he needs to be, but never stray outside of a child’s practical wishes. In other words, Murphy never resorts to ridiculous slapstick and Kirkpatrick refuses to put him in a situation that would upset the whimsically restrained tone of the film. Though it’s doubtful anyone will be rolling in the aisles, they would be hard-pressed not to be smiling for most of the film.

Shahidi alone is alluring enough to produce such a reaction as a minimum. Though the young actress isn’t called on to do much dramatic acting, her comedic timing and sheer screen presence elevate her to the top of the young-adult heap. She has an excellent rapport with Murphy and never slips out of the moment. Be sure to keep an eye out for this one a little later on in life as she transitions from child to adult actor in the next five to ten years. Her next role is in the action thriller Salt with megastar Angelina Jolie, but I expect even bigger and better things from Shahidi in years to come.

Though Shahidi is certainly entertaining throughout the DVD’s bonus content, it would have been nice to see a bit more of Murphy during the special features. The editing team behind each clip cuts in plenty of Murphy’s scenes from the movie, but the man himself only appears in “Getting the Part” to briefly discuss how much he likes Shahidi. Despite Murphy’s absence (or perhaps because of it), the single disc DVD is loaded with content. None are particularly enlightening, but it would have been difficult to provide truly remarkable behind-the-scenes information from such a simple film. The deleted scenes are adequate and an alternate ending shows just how much a poor editing choice can change the tone of a film.

All said, Imagine That is still not a great film nor even a career saver for Murphy. It’s is too predictable for older audiences and may be a touch too plain to hold some youth’s attention.

What it is, is something surprising from an actor so calculating in his decision-making: a humble attempt at sincerity. Murphy could have easily increased the budget and demanded a new director or writer to inject some of his more typically outlandish material. Thankfully, neither he nor his cohorts tried to push Imagine That from sincerity to absurdity, and the reality shines through.