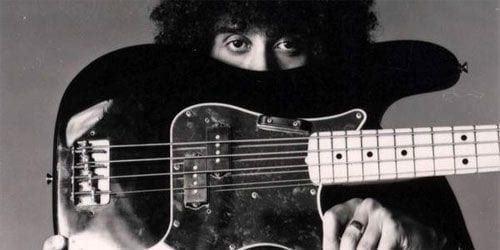 Thin Lizzy was something of an unlikely candidate for a hard rock band during its heyday in the ’70s and early ’80s. Led by a giant of a man, songwriter Phil Lynott, who also happened to be a black Irishman, Thin Lizzy was a bit of an anomaly as a rock band. Fortunately, Thin Lizzy also rocked harder than almost anyone else at the time, so the band and its leader’s uniqueness in other areas only served as a sidebar to the music.

Are You Ready? is the DVD release of the 1981 Thin Lizzy performance filmed in Germany for the broadcast on the television show Rockpalast.The latter-day lineup featured here—Phil Lynott on bass and vocals, Darren Wharton on keyboards, drummer Brian Downey, Scott Gorham and newest member Snowy White on guitars—delivers an energetic and captivating show full of several hard-rocking hits mixed with many favorite, if lesser known, album tracks.

Exploding out of the gate with the title track, the band races through an impressive, almost two hour, 19 song set that includes incendiary versions of songs such as ″The Boys Are Back in Town″, ″Jailbreak″, ″Black Rose″, ″Chinatown″, ″Rosalie″ and ″Waiting for an Alibi″. Phil Lynott was a magnetic force as a front man, and as he commands the crowd during this show, he certainly seems to be in top form.

Unfortunately, like far too much Thin Lizzy live footage, the Are You Ready? DVD isn’t on the level of its subject. As great a document as Rockpalast is for rock performances, both the video and the audio for Are You Ready? are of poor quality. The songs still rock, of course, but in comparison with other recent releases of concerts from that era, the sound is sub-par.

Visually, the stage is too dark, and the camera crew often appears to not be paying much attention. As for the picture itself, there are occasional, highly annoying, horizontal lines scrolling the screen at various points. It reminds me of trying to watch TV at Grandma’s house in the late ’70s, only I can’t spin the dials and fiddle with the rabbit ears to fix it. Why is a DVD-produced image doing this? Perhaps the original source was in even worse shape to begin with, but it feels like something more could have been done to further the restoration of this classic performance. Particularly because this DVD also doesn’t include extra features of any sort.

But back to the performance itself, it really does show Thin Lizzy at the peak of its abilities as a band. Both Gorham and White are amazing as they trade licks and they are clearly enjoying themselves as they show off in extended solos. In fact, every member of the band has his chance to demonstrate their considerable skills, as well as what their individual musicianship contributed to the group as a whole. It’s too bad that Are You Ready? doesn’t do a better job of showcasing the power of Thin Lizzy.