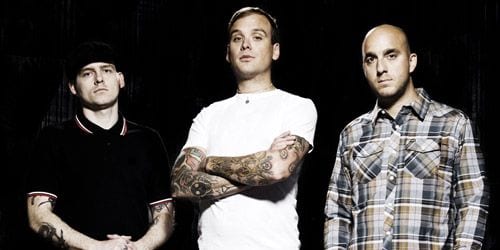 For anyone with even a passing familiarity with the Alkaline Trio, it will come as very little surprise that the band has chosen their 13th year to make a return to their early form. This Addiction marks the seventh full-length release from the band and it finds the threesome at a point of reckoning. The last couple of records had much more in common with late period Sisters of Mercy than the Misfits meets Naked Raygun punk rock garnered by their early success. If you lead the type of mesh shirt-friendly lifestyle that embraces A.F.I, Avenged Sevenfold and their spooky suburban ilk, you were probably in bad haircut heaven, but for those of us who were decidedly fonder of the band’s original Chicago bike punk oriented fare, it was pretty much write-off time. All nostalgia aside, Grant, Skiba and Andriano comprise the definitive Alkaline Trio lineup and collectively they have brought Alkaline Trio to its highest profile. I can’t begrudge their success and will be the last one to say the band hasn’t paid its dues. To that end, I fully understand that the guys are adults with homes and households to support, but when the Alkaline Trio Nike line came out and our heroes were making guest appearances on The Hills, it was pretty obvious that it was a far different era than the days last century when you could enjoy the gents on a Thursday night at Thee Fireside (RIP).

Alkaline Trio came up with indie labels like Asian Man and Vagrant, but as the band brought the Vagrant contract to term, it was pretty obvious that they would be pursuing other options, presumably of the major-label variety. Brief tenures on V2 and Epic followed, but both were as ill-fated as they were short-lived. Post-Epic, the band decided that the majors weren’t going to do anything significant for the band and founded their own Heart & Skull label, pairing up with Epitaph for distribution. The new opportunity prompted the time-honored return to basics, so after recording their last couple of records in Los Angeles, the band returned to their old stomping grounds of Chicago to record This Addiction. Early sonic ally Matt Allison returned to the engineering chair and tracked the proceedings at his Atlas Studios. As a long-time fan, it sounded good on paper, but the doubting Thomas in me was more than a little trepidatious when I threw this on.

The 12 songs of This Addiction are split 75/25 between Skiba and Danny tunes. That is pretty much the norm for the average Trio record, but hook for hook, it’s pretty obvious that Andriano needs some more shine on the next record. His three contributions are three of the best Trio songs in many years. The record opens with the title track, a Matty song that tries a little too hard to assert the return to their old school Chicago sound. The descending chords are textbook Alkaline Trio, and its far from a bad tune, but whiff of nostalgia aside, the song comes off more than a little Skiba-by-numbers. Point duly asserted, the gents get down to business with “Dine, Dine. My Darling”, a Danny song that can rightfully be lambasted for trying too hard with its title, but more significantly one that sports a sing-along chorus every bit as catchy as the Jersey titans it punningly pays homage to. It’s nice to hear the older, less layered sound that made me want to hoist a pitcher or eight of Old Style back in the day, but fond memories aside, why Skiba decided it was a good idea to blatantly rehash Goddamnit evergreen “San Francisco” like he does on “Dead on the Floor” remains to be exposed. He’s called it ‘a not too distant cousin’ and let me tell you, he ain’t lying. There is no disputing that “SF” is/was a great song and I’m much more in favor of him rewriting one of his own tunes rather than steal from somebody else, but its a tad brazen from where I’m listening. I like This Addiction more than I’ve liked an Alkaline Trio record since From Here to Infirmary, but there are a couple tracks that seem more than a little bit throwaway. Skiba postponed the release of a new solo record so as not to draw the spotlight from This Addiction and it does make one wonder if some more choice material has been reallocated.

Not that Skiba or Adriano have shied away from extra-curricular projects. Andriano plays in The Falcon with long-time cohort Brendan Kelly and helms his own The Emergency Room project while Skiba released his unabashed Joy Division/Sisters jocking project Heavens with their new partners at Epitaph and has that aforementioned solo record coming down the pike through Asian Man. While This Addiction is a return to the older Alkaline Trio sound, the gents certainly aren’t screening covers in their basement and having record stuffing parties to get the record out. The first single (also the title track) was released via a questionable plan wherein fans would advertise the release of the new record on their Twitter or Facebook pages, an act that would garner them access to a website streaming the track. Lovers of irony can join a companion program wherein fans can get a 7” of the single exclusively at Hot Topic. All of these things should do well in moving a respectable number of units of This Addiction for Heart & Skull and keep the kids at Epitaph happy at the same time. It’s hardly the best of their Asian Man days, but This Addiction is a solid mix of their old and new sounds that is well worth a listen.