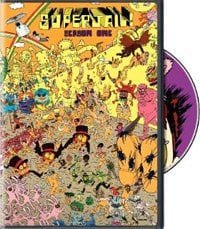 In Superjail!, limitations aren’t repressive chains that weigh down creativity and hamper free expression, they’re also guideposts by which we can measure the effectiveness of our ideas. No matter how far one strays from the norm, there is always a larger organizing principle at work. An abstract painting of muddled forms and globs of paint is still confined to a canvas. Piercing shards of feedback, distorted animal shrieks and a guitar played with a toilet brush, though decidedly not pop music, still falls within the realm of recorded sound.

In cartoons, anything the mind can conjure is easily rendered by an animator’s skilled hand or, more often these days, computer. As with any medium other, in animation there is the middle of the road and there is the borderland, and artists can go to these limits if they choose, but happens when they get there?

Superjail! is a tourist to these borders, and watching the show is like experiencing an enthusiastic traveler’s slide show of the trip. Though there are occasional moments of note, much of it is a tedious exercise in boundary-pushing.

The series is “about” a funhouse penal colony built inside a volcano and run by The Warden, a purple-suited cousin to Willy Wonka. The characters’ share a genetic predilection for craziness and boundless imaginations, though Wonka’s sinister side is tempered with liberal doses of cocoa. The Warden isn’t driven by profit or even a desire to see the hardened inmates of Superjail punished. In fact, he isn’t driven by much at all.

The Warden, as well as the hairy, transgendered guard Alice and sniveling jail accountant Jared, are just mouthpieces for the few scraps of plot tossed out in every episode. They deliver their lines to set up some brief story that invariably ends in a protracted fight scene. Nameless characters are stabbed, eviscerated, decapitated, disemboweled, de-boned, stuffed, flogged and filleted in every imaginable way. It’s an impressive inventory of the grotesque, a kind of serial killers’ idea book brought to life. The violence is over-the-top, gory and gratuitous, but it’s only offensive in its pointlessness.

These fight scenes are impressive in their chaos, and the sheer scope and detail virtually demands repeated viewings to take in all the gore, but they’re not entertaining. There’s nothing at stake here, no real characters to care about and no real story to engage the viewer. The visual acrobatics of the animators, who’ve clearly been given license to fill the screen with every possible thing they can imagine, soon becomes a gimmick, one that would maintain its effect if it were spread out over a series of unrelated shorts rather than a supposedly cohesive series.

The are a couple of bright spots, like the Scientology satire “Don’t Be a Negaton”, featuring D.L. Diamond, who’s a cross between L. Ron Hubbard and Gene Simmons, and the two-part “Time Police”, in which the best visual gag of the season comes in the form of a unicorn’s horn piercing a rainbow creating a shower of blood. Lisa Frank, eat your heart out. In these episodes the characters actually start to become three dimensional, providing a flicker of hope that the show’s creators are finding the balance between their obviously boundless imaginations and their storytelling instincts.

Bonus features include a music video of the show’s excellent theme song, “Going Home”, by the band Cheeseburger (featuring Superjail! co-creator Christy Karacas on guitar), the series pilot and a collection of animatics.