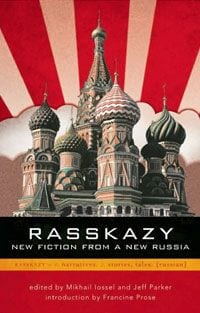 With a title like Rasskazy: New Fiction from a New Russia, this collection of post-Soviet short stories from Russian authors born in the waning days of the once-powerful empire raises some important questions. Namely, what is the New Russia, and how does it differ from the enigmatic empire of the West’s collective imagination? It is therefore only natural to expect some common thread running through the pieces to signal big ideas about Russian culture, politics, and literature or some common stylistic link connecting the authors to this specific time and place.

The answers are not found so easily. What we get instead is an exciting and amorphous jumble of styles and themes, with few unifying threads, unlike, say, the magical realism of Latin America or the absurdism of postwar Europe or the surrealism of ’20s France. This lack of thematic and stylistic cohesion may not sound like much, but in the wake of a regime built on the twin pillars of conformism and enforced “equality”, this diversity of style and form represents more than just artistic freedom. It signifies the resiliency of a people once the prison door has been swung wide.

Born between 1969 and 1985, these storytellers are not defined by the subjugation to totalitarian ideals that once stunted the creativity of previous Russian generations, but instead by their ability to experiment. In addition to exploring modern forms, the new generation seems liberated by the ability to write apolitically without feeling that silence on political matters is an act of cowardice or complicity.

Throughout the Soviet era, underground samizdat literature offered a pull to write subversive critiques of the regime. To be considered a legitimate thinker in many circles in those days meant to write honestly and critically about the ills of society and the government. With the added openness of the post-Soviet regimes—Putin’s questionable treatment of journalists notwithstanding—Russian writers can explore the more personal and less overtly political without feeling that they have somehow compromised their legitimacy as intellectuals.

As a result, these stories (or rasskazy in Russian) range from the realist to the absurdist, the playful to the nihilistic, the experimental to the traditional, and everything in between. Some are uniquely contemporary, mixing in snippets of snappy slang-laden dialogue from overheard cell phone conversations, while others are old-fashioned and timeless, evoking a slightly-skewed vision of the pastoral settings of 19th century Russian greats.

Perhaps the one thing that unifies this particular collection of short stories is their revelation that the Russians, the former arch-villains of the Western world, have become so damn ordinary, judging by our idea of what ‘ordinary’ is. Indeed, by replacing a few Slavic names and switching out Iraq and Afghanistan for Chechnya, many of these tales could easily be set in America or Western Europe. There is something almost jarring – yet undoubtedly hopeful – about seeing pet hamsters and cell phones and Google and blogs cropping up in Russian short stories.

Because Anton Chekhov, Ivan Turgenev, and perhaps Alexander Solzhenitsyn might be some of the last times many in the West have laid eyes on a short story from Russia, perceptions of the country are often trapped in a pre-Soviet or Soviet-era stasis. Though ignorant and uninformed, it’s not difficult for those of us in the West to summon a lengthy collection of Russian stereotypes straight out of Doctor Zhivago: endless winters, brutal concrete architecture, fur hats, corrupt bureaucracy. Whether or not intentional, the effect of contemporary intrusions like the hamster (which could, of course, be a part of any story from the 21st century) is to dislodge any misinformed reader prejudices.

Nonetheless, there are cracks in this normalcy, suggestions of a darker world than the cosmopolitan globalism in those stories set in Moscow and St. Petersburg. After all, this is the nation of Vladimir Putin, the supposed puppet presidency of Dmitry Medvedev, the assassination of journalist Anna Politkovskaya, and controversial border skirmishes with the Chechens and the Georgians, people of former Soviet territories. When these contemporary political issues enter the stories, either as major plot points or passing allusions, they seem to stand out as glaring reminders that the ‘normalizing’ effect of the past decades is, in many cases, just a thin veneer of change over a still-strong foundation of political corruption and outright criminality.

These tales of love and loss and change and redemption are peculiarly affecting. They achieve what any good short story writer should aspire to: plumbing the depths of human emotions in only a few short pages. In the end, we are not left with any grand pronouncements on the State of Russian Literature, the Current Russian Political Climate, or Russia in the Age of Globalization. Rather, we are left with moving portraits of believably authentic men and women: the man who adopts a family of quirky villagers in a town called Paradise as his marriage crumbles back home in the city, the sympathetic soldier incomprehensibly arrested as a deserter, and the poor dog cheekily named Ivan Denisovich left out in the snow. Isn’t that enough of a grand achievement, anyway?