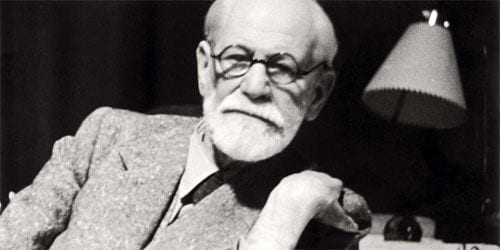 The sight of David Suchet as Freud can take getting used to if one recognizes the man more famous for his turn as Hercule Poirot, the fastidious star of the Belgian Police (yes, all of them) from Agatha Christie’s sleuthing imagination. Laden with heavy makeup as Freud in his last feeble days, Suchet affects a compelling performance as one of the rare few individuals who can claim to have invented a new field of study.

Freud was a great man. As a testament to that, we find most of his work largely discredited or, at the very least, superseded, by subsequent adherents to the field of psychoanalysis. However, his influence remains undeniable. Terms like ‘ego’ and ‘id’, nearly forgotten by everyday speech, experienced a rebirth through his work and now regularly work their way into conversations, scripts, and academia. That the academy can claim that Freud’s theories were indeed flawed at least suggests that his work was influential enough to demand rebuking.

While it is no longer fashionable to be ‘Freudian’, it is perhaps essential to claim some knowledge of Freud to gain admittance into any intellectual circle. Whether one slips in that company is, perhaps, itself an issue for further analysis.

Naturally, the more one is acquainted with Freud’s work, the more one can appreciate director Moira Armstrong’s vision. Freud proceeds very deliberately, tracing an arc through the Austrian’s life. Picking up a short while after a young Freud attains his medical license, the audience experiences Freud’s life. One expecting a dramatic thread or compelling narrative may well be disappointed: it is a faithful biopic which, in this case, unfortunately means a plodding itinerary. We meet Freud but Freud is mainly working. While Freud’s career may evoke interest, a man’s life seldom is – especially if drawn out over nearly six hours.

Writer Carey Harrison has instead decided to feature Freud’s work and not, as it might have been interpreted, the writer’s own. There is no particular drive throughout the episodes, there is no wonky emotional play, just a study of a man’s work. It might not translate into an esteemed work of fiction and at times it feels fussy and documentarian, as though, perhaps the editing was too afraid to touch a sacrosanct section of cinema. Perhaps it is best to say that it draws out and lingers a little too lovingly upon details a more plot-inclined piece might choose to dispense with.

Each of the six installments derives some dark pleasure from installing a certain methodical harmony: an audience is expected to be drawn into the series not so much by an emotional resonance with Freud’s life but a compelling curiosity to see how the man worked. We explore his struggles to launch a career, to argue for his theories, in pursuing a chaste relationship with a sister-in-law, the evolution of his groundbreaking work, and the eventual flight from the Nazis. If there is one thing to focus on, it is Freud’s work.

The film’s narrow focus still manages to draw out some worthy performances. Aside from Suchet’s strangely endearing assumption of the Freudian mantle, Michael Pennington’s turn as friend-rival Carl Jung is filled with genuine energy, equal parts brash and insightful, who sadly fades away mid-series, mirroring the real-life break between the two men. Michael Kitchen, too, as Ernst von Fleishcel-Marxow deserves some mention: a tragic figure suffering from addictions to morphine and subsequently cocaine – legitimate medical prescriptions at the time, he strikes an appropriately weighty tone that would resonate in Freud’s guilt for the rest of the series.

I suppose any filmed work would aspire to some form of art, to evoke something that is not there but merely vaguely suggested. It can be sometimes difficult to trace this is Freud. I struggled at times: its documentarian aspects seem stronger and more persuasive, deliberating over a fussy bit of historiography and filled with seemingly inconsequential variety and conversations. There is an almost cinéma vérité style to it: the camera captures a semblance of realness behind a hazy gauze of period drama. There are still some inevitable aspects that skews from historical record, suggesting at least some fictive elements: Freud’s personality varies dramatically from some biographical interpretations (varies if one seemingly treats those as canon), and some measures of the Freudian family do not seem to line up all too well with the famous Oedipal complex so often talked about.

This ultimately leaves one with a bit of a hollow experience. It took, after all, the better part of six hours to get through it all and, at the end, we are left a little disappointed. Well appreciative of a piece that displays obviously loving attention to the minutiae of Freud’s life and experiences, his fame and influence does not necessarily translate into an enjoyable pleasant experience proving that there is such a thing as being too faithful to a life’s work. Still, one cannot fault the director for attempting to capture a life in film, careful, as it is, to the last. The film’s flaws might have been overcome but alas, a viewing is subjective.