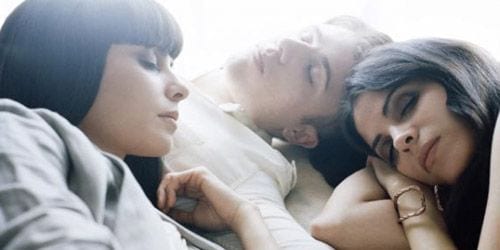 School of Seven Bells wants you to shake your ass.

“It’s weird, I don’t think people have caught onto the dance aspect of our music. I think the thing that pushed us in that direction was definitely playing live. So, you know, hopefully people connect the dots eventually,” says multi-instrumentalist Benjamin Curtis. He’s in London. It’s about 6pm and he’s relaxing before playing a show at Scala with his two bandmates, identical twins Alejandra and Claudia Deheza.

The band is currently on tour to support their new album, Disconnect From Desire. Back in the States, renowned Los Angeles DJ Jason Bentley plays their music daily and recently picked the album as one of his favorites. Nic Harcourt, the nation’s indie music shaman, has been relentlessly playing the record on his own weekly show. It recently peaked at #9 on Billboard’s Dance/Electronic chart while simultaneously hitting #29 on the Independent Albums chart. All of this points to a significant turn for a band whose previous album didn’t register in the top 200.

The step forward in popularity can be traced to the underground success of their debut album, Alpinisms, and to the nonstop touring that most bands find necessary to be able to make the business of music work in the age of The Pirate Bay. Ben speaks from experience when he says, “I think pretty much across the board what money musicians make is off playing live shows.” The new album was actually written on the road. The band has said that this paved the way for songs that would sound good through club sound systems and, when compared with the comparatively complex Alpinisms, be more suitable for playing live.

But it all gets back to the beat. How can you call a song like “Heart Is Strange” anything other than a dance track? Ben agrees: “I think we definitely intended this music to be equally body and mind, to have kind of a visceral quality, because it’s just something we love. I think we feel more comfortable with the machines and we feel more comfortable with the aesthetic of School of Seven Bells that we can push the music in that direction and not be in any kind of danger of losing ourselves.”

Machine generated rhythm can be dangerously close to being too perfect to function as the backdrop for tightly harmonized vocals, like those of Claudia and Alejandra. The effect can be soulless, but in School of Seven Bells it works. “I’ve always been interested in repetition. Especially in Secret Machines [his former band], I was definitely more interested in the trance aspect of things,” Ben replies when asked about his interest in electronic music. “This is just the next logical progression for me to explore. Exploring electronic textures and programming more because as I learn about music I appreciate people that do it well more and more.”

For Ben, and School of Seven Bells (he writes most of the music while Allie and Claudia contribute words and melodies), songs are conceived of as deliberate acts. “I don’t really do great with just fiddling around. I usually have the idea of a sound and then I chase the sound. A lot of times I’ll end up somewhere that I didn’t expect and it’s better than what I was thinking of but it always starts with the idea. I’ve never been comfortable with kind of turning the knob and seeing if a song comes out of it.”

The band is extremely close; the three of them until recently having shared a home. In a situation like that, the inevitable question of romance comes up. “Allie and I were together for awhile but we’re not anymore,” Ben says in the tone of someone who doesn’t really like getting asked about his personal life. “For a minute there was something but at this point the relationship is music and it’s family too because we’ve lived together and worked together for so long that we’re really close. We’re best friends.”

That relationship comes across in the music. Disconnect From Desire sounds like the work of a much more mature group. Ben comments, “It’s amazing; we’ve got really good chemistry. I guess I know how rare that is so I appreciate it more.” The sound on the new album has even started being compared with one of the world’s biggest selling artists. Ben explains, “I keep reading people comparing us to Enya and I don’t really understand what that’s about but it always seems like a positive thing so I’m just not going to question it. It sounds really fucking bizarre to me to think we sound anything like Enya.”

Because it’s his livelihood, the business and day-to-day struggle of making independent music is something that Ben thinks about a lot. But, after several years in bands, he’s become sage-like in his understanding of the pressures that artists face: “I think it’s probably one of the most beautifully organic hustles that you could ever do because it is a hustle in a way. If you’re not writing pop music and you’re not some kind of sensation or something like that, things are not going to fall in your lap and you have to create your own world for your music to exist in.”

He continues, “That’s the thing for me; it’s always been about making more music and finding a way to do the next idea. The creativity is definitely connected to the business because we’re not independently wealthy, we don’t have rich parents that can just float us when we need to do something. If we’re going to do this it has to work all the time.” In the struggle there is a silver lining. “It’s positive too, though, because I’m happy to work and I’m happy to spend my life making music. It’s something that I can do and I’m really confident about that.”

Before the conversation ends, he offhandedly reveals the anxiety that every band lives with during an album release: “I was really surprised. I had no idea what people were going to think about this record. It’s really been positive. It’s kind of cool to find out you’re in touch with the world. You’re not crazy and you’re not just completely out of step.”

The music reflects Ben’s confidence, and the confidence of his band. The album is a visceral, unapologetic, dance-tronic album from a group that most people thought of as an indie band that happened to have a lot of drum machines and synths. While there probably won’t be kids with glow sticks at their shows, there will be dancing.