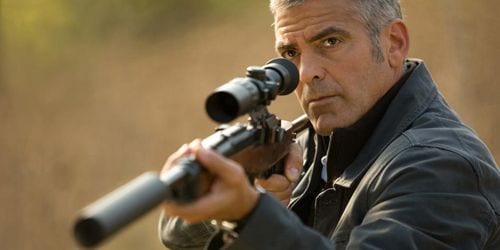 “I’m no good with machines.” Jack (George Clooney) says this more than once in The American, and it’s a lie. He’s very good with machines, a point made by recurrent scenes where he’s working on them, specifically, cars and guns. Jack makes high-end custom weapons for a living, and spends long hours refining each element to suit a client’s needs, creating the perfect mix of range and capacity.

Jack is assembling such a weapon throughout Anton Corbijn’s film, a job set up for him by his usual contact, Pavel (Johan Leysen). Again and again, Jack returns to his rented room in Castel del Monte, a medieval town in the Gran Sasso mountain range, where he lays out the parts on a wooden table precisely. When he heads outside in search of a café or a mechanic’s shop, he appears in sharply angled shots, navigating narrow, steep alleyways, all shadows and 13th century stones. Jack’s an outsider here, identified as “the American,” but he’s also of a piece with his surroundings: quiet, steadfast, seemingly labyrinthine.

Jack is also at something of a turning point. As the movie begins, he’s confronted with consequences of his work, which includes not only making guns but also using them, expertly and ingeniously, as a contract killer. When a couple of assassins attack him at a remote cabin in Sweden — the violence rendered in sudden, muffled moments, bright red splurts of blood on white snow — Jack decides to get out of the business. During brief conversations with Pavel, he agrees to take that last gig, the “custom fit,” but he’s uneasy, and so are you.

Jack sorts through his past and his prospects in a series of exchanges with a chance acquaintance, Father Benedetto (Paolo Bonacelli). Like his walks through the hilly, stony streets, these are cryptic, allusive scenes, the language impressionistic, the ideas clichéd. He tells the father he’s a photographer, in town to work on a guidebook. When Jack suggests he’s not interested in the local “history,” Benedetto looks predictably wise: “You’re an American, you think you can escape history, you live for the present.”

At once brutal and banal, Jack bears multiple burdens, including his personal background (which remains mostly unknown) and his representational status as modern imperial upstart. As he maintains his workout routine alone in his room — Clooney’s hard body shot from low angles, performing pushups and pull-ups — Jack keeps his focus inward, not quite seeing the most daunting burden of all, the long line of similar movie plots that precede The American. These make the film old, in ways that have nothing to do with its exquisite images of Italian hillsides and stone houses.

As in many of these plots, here the embodiment of his potential future, of his desire to change course is a prostitute, Clara (Violante Placido). Sensual and generous, she’s in love with her client though (because) she knows very little about him, calling him “Mr. Butterfly,” because he has a tattoo of same on the back of his neck, and, yes, because he’s so elusive. He insists that with him, she doesn’t have to act, that with him, “You come here to get pleasure, not to give it.” The line is so corny, you think for a moment he’s kidding, but Clara takes him seriously.

So does Mathilde (Thekla Reuten), the client for Jack’s last job, and the embodiment of the past he can’t escape. Cool and smooth during their first encounter at a café (when she details what she needs her gun to do), Mathilde alters her appearance over the course of their next couple of meetings, increasingly resembling Clara, in a formfitting dress and then, with her initially ironed-straight hair rather elaborately tousled.

If it’s clear to you that Jack’s past is overtaking his future, he remains stubbornly oblivious of the path stretching before him. When he and Benedetto have the requisite conversation about sinning — each confessing, obliquely, that he has done so — Jack resists the very idea of redemption, insisting, “Everything I’ve done, I’ve had good cause to do.” Benedetto insists that he knows more than he says. “You cannot doubt the existence of hell,” the priest declares, “You live in it now.” At this point, late in Jack’s self-examination, and late in the process of assembling his last weapon, this observation is more than a little obvious. As such, it lays out the film’s essential dilemma, its not-always successful effort to balance allusion and pronouncement.

“Don’t talk to anyone,” Pavel cautions Jack at film’s start. “And above all, don’t make any friends.” But he must. For as he seeks escape and denies the remorse etched into his face, as he ponders his decreasing options and mechanical details, Jack is still living inside a movie where “friends,” that is, women, serve a crucial purpose. And as they illustrate his inner life, they’re necessary in The American, like the Italian landscapes and winding stone stairways.