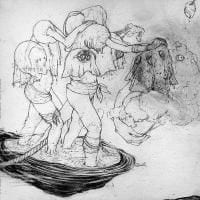 Let’s get it out of the way: Future Islands’s In Evening Air might be the best record of 2010. In that record, the Baltimore-based trio created an absolutely indelible mix of New Order-style bass hooks, intricate but danceable electronics, and a masterful sense of melody and drama. Vocalist Samuel T. Herring is the clear star of the show, both on record and in the band’s explosive live performances. Equipped with a ridiculous range, his voice moves from guttural growls to an easy tenor in a matter of moments. Future Islands have had a good year, but it remains staggering that they’re not yet one of the biggest bands in the indie world.

Future Islands capped their summer with a rare acoustic show at Baltimore’s always inspiring Whartscape festival, a gift to a hometown audience in a city noted for the vibrancy and close-knit camaraderie of its music and arts scene. Fortunately for non-Baltimoreans, the band also recorded a pre-Whartscape acoustic set at WYPR’s radio studios, and they’ve released that four-song recording as Undressed.

The EP proves to be an interesting experiment. Two of In Evening Air’s best tracks show up in “An Apology” and “Long Flight”, rounded out by Wave Like Home favorite “Little Dreamer” and the title track from the In the Fall EP. Herring, bassist William Cashion, and keyboardist J. Gerrit Welmers are joined here by cellist Kate Barutha, Devlin Rice on acoustic guitar, and live drums by Denny Bowen. This supplementary cast helps to flesh out the acoustic versions of these songs, giving them an added richness and breadth that helps their transition in every way.

In its original version, opener “In the Fall” grabbed the listener’s attention by virtue of a pulsating synth that inflated its beat to supersized proportions. That’s gone here, but in its place lies a beautifully constructed, mournful piano ballad. Welmers’s airy keys are propelled by Cashion’s insistent bassline, both of which find added gravity through Barutha’s graceful work on her cello. Herring turns in a vocal performance less subtle than in the song’s original version, and his passionately clipped syllables make this recording truly captivating.

“An Apology”, perhaps the band’s strongest song, comes next. Herring’s a-monster-ate-David-Bowie approach on In Evening Air made the song one of the most thrilling pieces of music recorded all year. His bellowing seemed to come from a reserve of hurt and longing untapped by most vocalists. Here, he holds back a bit, not hitting the lower notes on his register. However, with his Tom Waitsian scene-stealing put on hold, the song’s dramatic arc and musical weight come through more clearly. Herring sings at the top of his game during the track’s climax, and if he’s cut the original version’s high-wire tension, he’s replaced it with a restraint that makes the refrain of “so far away” seem bruised in a different, and somehow equally moving, way.

Live favorite “Long Flight” is the song here that breaks most clearly out of its original mold. The dark keys and thudding bass that open Undressed’s take are at first almost unrecognizable in comparison to the song’s album version. Herring plays vocal chameleon again, singing his lines in a dry, cracked tenor thoroughly imbued with a dark energy. On In Evening Air, the song builds to a mindblowing climax, with Herring shredding his vocal chords as the betrayal and disappointment the song depicts burst forth in a moment of cathartic revelation. He doesn’t try for the same move here. While on first spin, it may seem a disappointing choice for those waiting for that explosion, on repeat listens the song simply takes a different shape. Now, it’s a shuddering and brooding track, its violence contained throughout. Without that release, “Long Flight” seems almost more threatening.

Interestingly, it’s on closer “Little Dreamer” that Herring seems to finally let loose. The song’s always been a surprise play for the band, its Motown-infused melody smoky and vintage. It’s also the song in which Herring gets to showcase his pipes in the most traditional manner, easily carrying its stately tune forward. In that way, “Little Dreamer” would seem to be the cut from Future Islands’ catalog that would make the most sense in an acoustic setting. It does make sense here. The band plays it straight, with Herring adding new drama in his barks and contagious confidence.

If Undressed seems to sacrifice some of Future Islands’s energy, it does so in order to showcase the band’s compositional chops. They’re writing tight, inventive pop songs, at once familiar and thrillingly new. This EP might be a victory lap, but let them keep running.