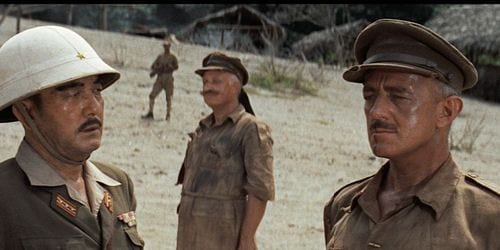 It’s more than just big ideas on a broad campus. While the label implies such a grandiose scale, issues of scope are not the sole reason for the tag. Movies are considered “epics” when the initiatives inherent in their design are as vast and varied as the motion picture landscape that play out upon. These films are not just bursting with wide-open vistas and the various multicultural elements intrinsic to them. No, the devil and dimension is in the details, in the smaller moments that modify and magnify the expansive setpieces on display. A perfect example of this often foolproof formula is David Lean’s brilliant The Bridge on the River Kwai. Taking a fictionalized approach to the POW experience in World War II, this amazing motion picture not only addresses a major military search and destroy mission, but its deals with the smaller human issues of duty, honor, and what it takes to be a man.

The story centers on the surrender of Singapore to the Japanese and a group of British prisoners led by proud officer Colonel Nicholson (Alec Guinness, in his Oscar winning performance). Coming face to face with camp commandant, Colonel Saito (Sessue Hayakawa), they learn that the enemy has no plans on following the Geneva Convention. Instead, the Japanese want the inmates – all the inmates – to build a bridge over a strategic location in order to help with troop and weapons movement. Initially, the English balk. But Nicholson, arguing that no UK solider will be seen shirking his duty, demands they give their best effort. In the meanwhile, an American GI named Shears (William Holden) escapes, only to be recruited by the US to return to the site and destroy the bridge. While clearly a suicide mission, he agrees, hoping that Nicholson and his men won’t somehow stall the raid.

Acknowledged by the Academy for his work here, English auteur David Lean was the king of the epic. In the course of his forty years behind the lens, the director helmed such mega-masterworks as Dr. Zhivago, Lawrence of Arabia (where he picked up another Oscar), and A Passage to India, among many others. An expert in the juxtaposition between the mighty and the minor, Lean loved the tactile feel of his many locations, drawing power from the deserts where T. E. Lawrence actually roamed and the various snow-swept backdrops envisioned by Russian writers like Boris Pasternak. For Kwai, the filmmaker sought out the hot and humid climes of tropical Sri Lanka, using the unbearable heat and uncomfortable conditions as a motivation for his conflicted cast. Star Alec Guinness was especially perturbed by Pierre Boulle’s novel. A Frenchman, the UK icon was convinced the book – and his character – were conceived as anti-British. Lean had to persuade the actor to stay with the project, both coming to creative loggerheads time and time again.

With some minor changes to the tome by blacklisted screenwriters Carl Foreman and Michael Wilson (who got to watch the non-English speaking Boulle pick up their gold statue for Best Screenplay come awards season) and a solid American name in the center, Lean looked to the source material for a means of making his often humanistic points. Like fellow countryman Carol Reed (The Third Man, Oliver! ), he wanted to see the virtues of real people placed alongside impossible, improbably odds, to see love and faith and dignity replace bomb blasts and stunts. This is not to say that Lean didn’t love a good action sequence – The Bridge on the River Kwai, like many of his movies, has some real winners – but there was always a belief that character was at the core of his dramatics. The battle between Nicholson and his men, the British and the Japanese, the subversive Yank and the rest of the ranks reflects the complexities of combat and the ravages of war better than some battle scene.

Indeed, there is more to this epic than just the carefully jerryrigging of a cast of thousands. The Bridge on the River Kwai carries us through a particularly rough reality – that sometimes, the line between cooperation and collusion is razor thin. Nicholson is tagged a traitor for giving into the Japanese demands, disciplining his own men for not doing a better job on the bridge. While they see such a stance as nothing short of collaboration, the stiff upper lipped officer sees it as a matter of pride. Indeed, these are not machines manning the guns of combat. These are men, men made up of personal flaws and psychological leanings that cannot be easily interpreted or explained. The best parts of Kwai concentrate on this dilemma, delivered in a way that makes even the most mundane concept seem superlative.

Even better, Lean knows the camera, understands how to fill the frame, and has an artistic and aesthetic acumen than marries material to meaning in a way that is almost impossible to copy. The reason there aren’t more of these types of movies nowadays, aside from demographical demands, is the notion that few have that magic ‘epic’ touch. James Cameron has it. Steven Spielberg too. Peter Jackson has a firm grasp of the concept, as does/did foreign filmmakers like Sergio Leone, Federico Fellini, and Zhang Yimou. Lean, like his contemporaries in the field, made it look dead easy. He could wow us with a single shot, or keep us on the edge of our seat through several minutes of meaningful exposition. Kwai‘s plot is calculated to maximum manipulative effect, working every plot point to polished perfection. It’s what Lean puts in the spaces in between that turn the movie from memorable to meaningful.

Indeed, 53 years after it first amazing moviegoers, The Bridge of the River Kwai continues to astound. This is the kind of film you feel, that gets beneath your cynical contemporary demeanor and demands attention. From the solid work by everyone in front of the lens to the tireless efforts of the throngs behind, you can see the breadth of vision in every single frame. It’s a very moving film, one that carries the spirit of the concerns Guinness had to happier, if still tragic, ends. Like the great poems of ancient Greece and Rome, like the legends that come out of generations of fabled folklore, the epic endures because its taps into a universality that’s undeniable and otherwise unfathomable. If you want a flawless representation of this rarified reality, there’s none better than The Bridge of the River Kwai. Suffice it to say, it’s a masterpiece…and an epic one at that.