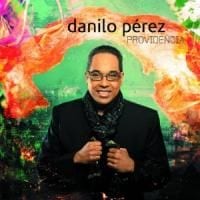 Pianist Danilo Pérez has been around for a long time, first known as the youngest member of Dizzy Gillespie’s United Nations Orchestra, then acclaimed for several lovely recordings in the 1990s that brought Panamanian elements to the jazz trio or quartet format, and then as the pianist in Wayne Shorter’s unparalleled 21st century quartet. Pérez works in the mainstream of jazz, but he has always shown a flair for bringing fresh elements to the music’s center.

Providencia is Pérez’s most eclectic and adventurous recording, sweeping in a wide range of instrumentation and style, one which reconciles a woodwind quintet, breezy scat vocals, the acid-toned and forward-leaning solo style of alto saxophonist Rudresh Mahanthappa, a dash of steelpan drums, and Pérez’s own post-bop via Latin Jazz piano trio style. Depending on your taste for this kind of thing, Providencia is either a rich and varied meal or a crazy mess of styles. What it is not is staid or overmodest. This is a recording that seeks to blow jazz up to a global scale. To these ears, it hugely succeeds.

A good amount of Providencia is written music with a cinematic scope and relatively little improvisation. “Bridge of Life”, for example, is a two-part composition that features woodwind quintet (oboe, clarinet, flute, bassoon, French horn). The openings of each piece could be a dash of Stravinsky or Copeland with the piano trio entering into dynamic dialogue with the written parts. The piano solo on “Part One” is framed by beautifully interwoven writing for the whole group. Little classically fused jazz is this balanced or natural.

The title track, “Providencia”, features the wordless vocals of Sara Serpa, in unison with a flute, riding over the leader’s quintet (with Ben Street’s bass, Adam Cruz on drums, and Jamey Hadded and Ernesto Diaz on percussion). This track is much more complex than the usual “head-solos-head” jazz composition, with a long piano/vocal introduction giving way to a full band development that reshuffles the instruments into a variety of groupings, playing carefully written arrangements. Equally cinematic in scope and complexity is the opener, “Daniela’s Chronicles”; written for Pérez’s daughter, the tune begins with baroque counterpoint and charming folk melodies, moving through a series of moods and styles that includes but does not focus entirely on the kind of modern post-bebop jazz with which Pérez is most associated.

Providencia, however, is not some kind of gussied-up pseudo-classical crossover recording. Equally prominent are the tracks featuring Rudresh Mahanthappa’s brazen flurries of alto saxophone excitement. “Galactic Panama” has the joyous groove of Panamanian music and a plump and pleasing melody, but the two improvisers trade back and forth with playful daring, resulting finally in a stuttering, edgy collective solo. There are two freely improvised duets between Pérez and Mahanthappa (“The Maze”) proving the pair is equally adept at stabbing urgency and impressionistic balladry. And joining these two performances is a full-band groove on which Mahanthappa and Serpa play in hip harmony. “Cobilla” features Pérez using some electric piano as well as acoustic, further expanding his options.

Happily, Pérez does not ignore the core of his band—his trio. “Historia de Amor”, a Latin jazz standard by Carlos Eleta Almaran, swings to a pulsing Latin groove, and “Irremediablemente Solo” by Avelino Muñoz is a whispered ballad showcase for bassist Ben Street. These tunes are a good reminder that Providencia has a center thriving on the touch and feel of a strong pianist. That said, on these trio features, Pérez remains a team player, hiding his own technique for perhaps the first time.

Providencia is such a success because it finds the leader less involved in pure pianism than in layering a wonderful band into an arresting spectrum of shades that serve his dynamic compositions. Like a great kaleidoscope, this recording invites you back for more and more variations. Your ear will catch a new detail each time out. Amidst all this listening, you will be hard pressed to find a single cliché.

When an inventive mainstream jazz musician like Danilo Pérez is able to work in the tradition but avoid cliché, then something is going right. The center of jazz—which is indeed more and more an international thing—is in good hands with this artist and his cinematic vision for our great art form.