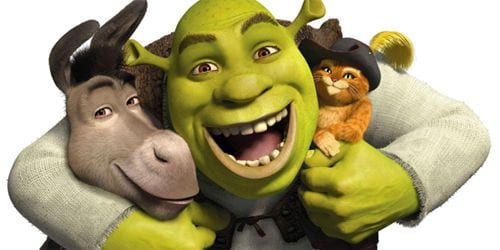 Shrek doesn’t want to be bothered. Like, at all. Stay away.

You see, Shrek is an ogre, and he’s grumpy. He likes his swamp, his daily feast of bugs, and being feared by the local villagers. He’s immediately against any sort of change to his isolated existence, and will do just about anything to set things back to the way there were. He’s selfish, short-tempered, and — to be rather blunt — a very unlikely protagonist for a family film. He’s not a young lad learning that he can believe in himself to overcome all odds, no; he’s one who’s fed up with the world because the world looks at him and doesn’t like what it sees — and Shrek just as easily returns the favor.

So what makes this ogre so endearing? Over the course of four movies, this franchise follows a lonely curmudgeon turn into a true friend, a husband, and even a father, all while bandying about a keen sense of pop culture wit, leaving behind nothing but a slew of fairy tale clichés turned promptly on their head.

Yet four movies is a lot for one character, and now that all four films are put together for the first time on Shrek: The Whole Story, we can now see two things with abundant clarity: just how deep the messages of these films got, and just how glaring their respective flaws were.

DreamWorks assuredly was taking a bit of a gamble on bringing William Steig’s excellent children’s novel to life, albeit with its own savvy twist (not like most people would be offended by the altering of the text anyways, because, let’s be honest, most people still haven’t read the book), but given that this was only DreamWorks fifth animated film ever (following Antz, The Prince of Egypt, the major fumble The Road to El Dorado, and the surprise success of the Aardman co-sponsor Chicken Run), it was obvious that they were looking for something to franchise. It’s a bit of a relief, then, that by making the central figure someone as inherently unlikable as Shrek, the studio was willing to at least take a bit of an artistic risk, and lo and behold, it paid off brilliantly.

In watching the first film again, it’s easy to see why it was such a critical and commercial success: plain and simple, it was funny. Although Shrek never told many jokes himself, he was a perfect foil for his supporting cast, but especially the motor-mouthed Donkey (brilliantly voiced by Eddie Murphy, essentially streamlining what he did as Mushu in the 1998 Disney film Mulan). Shrek’s unflappable single-mindedness helps him bust through familiar clichés (most notably during his rescue of Princess Fiona from a dragon-guarded castle), and its this kind of off-kilter storytelling that winds up giving the film its personality.

Yet in the world of Shrek, few things are sacred: notice how most of the notable fairy tale characters (Snow White, the fairy godmothers, Tinkerbell, etc.) are modeled rather closely to their more famous Disney counterparts — which soon makes the subversion of their notable characteristics all the cheekier (in a description of Snow White, the game-show emcee Magic Mirror notes how “although she lives with seven other men, she’s not easy!” — insanely racy stuff for a kid’s film).

Yet Shrek still finds heart in its message of acceptance, particularly when Fiona (Cameron Diaz), when freed from her human-by-day, ogre-by-night curse by true love’s first kiss, discovers that her true form is that of an ogre. She’s not saddened by the revelation, even if the greedy Lord Farquaad (John Lithgow) is. In one quick gesture, Shrek tackles the issues of self-respect, body-image, and “inner beauty” without as much as batting an eye, and providing genuine optimism and joy towards the conquering of these issues. It’s a remarkably intelligent message, and it soon sets the templates for the films that follow (because, by the time we reach Shrek Forever After, who would’ve guessed that you could get kids emotionally invested in Shrek working through a mid-life crisis?).

A sequel to Shrek is obviously warranted, but this is where problems begin to emerge. Although the story of Shrek 2 is once again a bit more high brow than what you’ve come to accept from typical animated fare (here the clashing of family values, as Fiona’s father has a particularly hard time dealing with who her daughter has fallen in love with, much less what here “true form” is), the plot mechanizations begin to show a bit more through all the lushly rendered scenery.

The most glaring flaw is not in the plot, but in the inclusion of Puss in Boots. Although the character is quite dashing and lovable (especially when voiced by a having-way-too-much-fun Antonio Banderas), there is no grounding to him. He’s a swashbuckling cat that tries to kill Shrek, is defeated, and is then befriended by him. There’s not much else there to behold — that’s the character. True, Donkey’s character emerged under similarly vague circumstances, but his character developed right along with Shrek from the get-go, and, by learning lessons right along with Shrek, develops a character arc. Puss, meanwhile, remains remarkably (almost painfully) static.

With that said, however, Shrek 2 still has the magic of the original intact (if anything, the pop culture references got even more daring and risqué, although the largest belly-laugh moment comes from a brilliant “Be Our Guest” send-up), even if the heart at its core is just a size smaller than it was in the first film. Still, both of those films are several steps above the positively abysmal Shrek the Third, which is as blatant an example of franchise fatigue as you will ever see.

A brief glance behind the scenes reveals part of the reason as to why this may have happened: Andrew Adamson, the director of the first two films, soon left to direct the first two Chronicles of Narnia films for Disney/Walden Media, and although he authored the basic story for Third, the four writers who tackled the screenplay invariably lost a lot of what made the first two films so special to begin with.

Although Shrek does have a very potent challenge to face in this particular film (shrugging off his royal responsibilities to a young blood relative while also dealing with pending fatherhood), there is no tension driving the plot forward. Prince Charming (Rupert Everett), having lost his Fairy Godmother mother in the last film, swears to become the rightful king of Far, Far Away by bringing all the so-called villains of other tales with him to help rewrite their endings. It’s a revenge tale with no gravitas — Prince Charming does not a convincing villain make. Coupled with extremely low stakes for the characters (and a rather limp-voiced performance by Justin Timberlake as heir-to-be Artie), Shrek the Third is an out-and-out misfire. Certainly, a few worthwhile moments make it through (the Gingerbread Man’s life flashing before his eyes could have been a short film in its own right), but when the humor is this forced and the plot is this hackneyed, it’s amazing that DreamWorks even gave this story the go-ahead in the first place.

Give credit to DreamWorks though: it listens to its audience. Upon seeing the tepid reception that Shrek the Third was receiving, DreamWorks knew that it would probably be a bad idea to end its trademark franchise on a sour note, so it went back to the drawing board for Shrek Forever After, a film that is far less funny than its previous installments, yet rivals the first two films in sheer heart and depth.

Shrek — now with a loving wife, free of royal commitments, and father of three adorable children — seems to have it all. Yet, the daily routine that he goes through is starting to get to him: changing the children, fixing the out-house, dealing with the annoying celebrity bus tours that swing by his swamp every day — it’s not only becoming too familiar, but it’s taking the edge of his personality, resulting in a very public outburst during his kids first birthday party.

Seeking solace, Shrek accidentally runs into Rumplestiltskin (voiced by Walk Dohrn, who is actually a DreamWorks storyboard artist), who has actually been planning revenge on Shrek for some time, as his princess-saving plans prevented a deal with Fiona’s parents from going through, which would have resulted in him ruling the entire kingdom of Far, Far Away. When Shrek signs a deal with Rumple to become a true ogre for a day, little does he realize the implications of such a one-sided contract: he’s thrust into an alternate reality wherein yes, he’s feared, but he never met Donkey, never rescued Fiona, and never even had kids. Within 24 hours, he not only has to right his wrongs, but also has to stop Rumple and his army of witches in the process.

What ultimately makes Shrek Forever After work is that by placing Shrek in this new context, it’s not he who reluctantly befriends these characters and goes on these quests to get things back to the way they once were; he must now actively be the one befriending, saving, and looking out for his friends. He’s not merely retreading the plot-points of the past films, no. Instead, his character is showing his maturity by taking such an active role, really bringing his arc full-circle. Rumple proves to be a worthy villain (and a far cry from Charming in terms of dastardly deeds), and by placing familiar characters in new contexts (Fiona is now a warrior princess, Puss in Boots is now one fat cat, etc.) the writers have got an instant comedy cache built up. Leave it to the dialogue-free Pied Piper, however, to walk away with the film’s best comedic moments, including the single most inspired use of the Beastie Boys’ “Sure Shot” ever set to film.

Although Shrek Forever After does an admirable job of wrapping up the series, the numerous, numerous DVD special features included on this box set wind up giving viewers a whole new perspective. Although most of the “Shrek, Rattle & Roll” music segments are only passably entertaining (and the less said about Donkey’s Christmas Shrektacular the better), some of the behind-the-scenes featurettes actually give a great deal of insight into the development of this franchise. Mike Meyers, for example notes that even though he recorded all his lines for the first movie, after seeing a rough cut of it, he asked to redo the entire thing just to get his character closer to where he envisioned it being. Amazingly, DreamWorks agreed, for quite a bit of money too (although Meyers never found out about the price until afterwards).

What’s inexplicable, however, is how certain special features are only on select films. We have filmmaker’s commentary for every film but Shrek the Third? We have deleted scenes from each movie except Shrek 2? We have no Shrek, Rattles & Roll for Shrek Forever After, but have one for Donkey’s Christmas Shrektacular? It’s a strange note, but, more often than not, these featurettes are worthwhile (especially the filmmaker’s commentaries, which give plenty of background to each film without tilting too far into self-congratulations — although they do that at bit).

DreamWorks Animation has had a while to develop as a studio, and, slowly, have come to some important revelations; it realized that, much like Pixar, story and character always take precedence over jokes and animation any day of the week, which explains a bit as to why for every Monsters vs. Aliens that DreamWorks produces, it created something like How to Train Your Dragon, and continues to blur that line between populist entertainment and great art. DreamWorks will never be as innovative as Pixar is, but it’s slowly turning into a studio of great storytelling. It may have officially started with Antz, but DreamWorks Animation’s story truly begins with an ogre who didn’t want to be disturbed by anyone. Four films later, we’re all pretty glad DreamWorks bugged him, anyway.