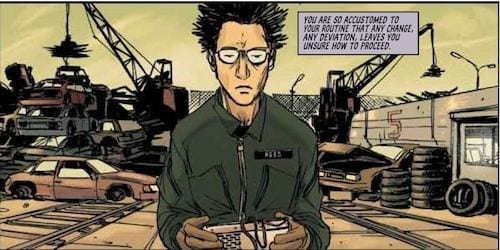 Crafting a prequel to one of the most beloved works of Philip K. Dick couldn’t have been an easy job for writer Chris Roberson. Do Androids Dream of Electric Sheep? exercises a considerable hold on the science fiction zeitgeist due to its deep themes from one of the literary giants in this genre. Furthermore, the Ridley Scott adaptation expanded on Dick’s prose to craft one of the most fully realized, and philosophical, science fiction films of all time. Ambiguities abounded in Blade Runner. What does it mean to be human? How does one reconcile what it means to be human when the replicants appear to exercise more compassion and emotion than their masters? What is Deckard’s true identity? Debatable questions, such as these, elevate works of science fiction beyond the stereotypical alien babes and blasters. How does Roberson’s yarn compare?

The tale itself follows a similar formula to its source material despite occurring a number of years prior to the events of the novel and film. A pack of renegade androids are loose in a crumbling megalopolis. While the clock is ticking on their artificially shortened lifespans, civil authorities are attempting to hunt down and “retire” the misanthropic replicants before they can enact any schemes of mass murder and genocide.

Stylistically, the story sheds the film noir quality that infused Blade Runner. There’s a more militaristic vibe to the entire setting with a higher emphasis on gunplay than those familiar with Dick creation are accustomed to. It’s fitting considering that the world war which transformed much of the planet into a lifeless hovel concluded shortly before the story began. However, Roberson introduces enough philosophical talking points to elevate his story beyond a standard sci-fi/action romp.

Empiricism, questioning its importance, features heavily in the text. Malcolm Reed, an erstwhile, sans medication schizophrenic, caught up in the plot, comments “How could you trust your senses when you saw things, heard things, that couldn’t possibly exist. How can you know what’s real?” Despite the fact that this is a work of fiction, how do know what’s real? I can experience a dream full of fantastical imagery through my senses. Just because it’s a dream doesn’t mean my senses weren’t utilized. Does that make it real? Injecting philosophical musing like this keep the story more in line with its original source material. One of my greatest fears going into this miniseries was the magic of Dick’s prose and Scott’s film wouldn’t translate properly. Prequels often don’t hit their mark.

However, questioning knowledge has always been at the heart of this world. How does one really know what is real and what is imaginary? This is expressed quite literally in Blade Runner when the latest model replicant is unveiled to come equipped with implanted memories. Furthermore, due to the androids’ shortened lifespan, their sensory experiences, things humans have a lifetime to become accustomed to and make sense of, are compressed into a space of three or four years. Observing how Roy Batty, Malcolm Reed fulfills this role in the comic despite his humanity, comes to grip with that knowledge forms the emotional and philosophical backbone of the tale.

This is compounded with an exchange between Malcolm and the villainous leader of the rogue androids. The replicant states: “You can see me, standing right here before you. Don’t you trust the evidence of your senses?” To which Malcolm responds: “I see a lot of things, and I don’t trust any of it.” Essentially these two have articulated one of the oldest philosophical arguments. Expanding on this discourse places Dust to Dust alongside the source material as a worthy addition to the canon. This is, by the way, the official prequel to the novel, as explicitly stated in bold on the credits page.

Questioning knowledge is at the heart of this world. When the person sitting in the cubicle next to you turns out to be an android, how can you trust your senses when they look, sound and smell human? Sure, a Voight-Kampff test can determine who’s who, but then the results are examined via one’s senses. How can you trust those when you’ve already been fooled completely once before?

It’s beyond the scope of this review to weigh in on the merits of empiricism. Nevertheless, Roberson is able to encapsulate a piece of Philip K. Dick with a heaping helping of Ridley Scott for good measure. Dust to Dust is a fine prequel that doesn’t really rock the foundations of its source material. But I imagine this project was never intended to perform that function. What this comic does achieve is broadening one of science fiction’s most beloved tales through philosophical discourse, not moody atmospherics or pulse pounding action. A nice piece of the canon that doesn’t upset or offend.