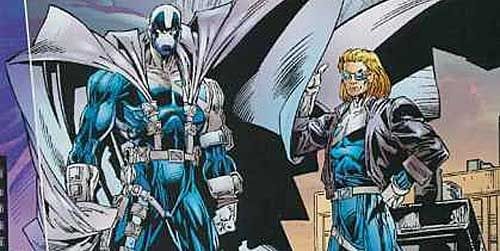 All I’ve got handy is Acclaim’s Quantum and Woody.

Quantum and Woody is the story of two superheroes: Eric is the driven, earnest, disciplined partner, while Woody is the streetwise smartass. Eric is African American; Woody is European American. Eric’s superhero name is Quantum; Woody’s superhero name is Woody. Quantum and Woody bicker with one another and they try to fight crime and they say and do things that are kind of comical, but nowhere near as comical as they seemed in 1997. Or maybe Quantum and Woody’s antics are just as funny (or unfunny) as they always were—perhaps they were just more amusing when I was 19.

Alas, yes, Quantum and Woody has aged poorly, and in a manner that proves challenging for the essayist; it’s not audaciously bad, it’s mostly just limp. Most of Quantum and Woody’s humor is juvenile and obvious—as when Eric says, “Tell me again when you drop dead from the toxicity” and Woody replies, “Eric, it doesn’t matter whose titty”—and its ostensibly touching scenes have the feel of the Very Special Episode pandering of ’80s sitcoms; a flashback to Woody’s childhood with his junkie sister and drunken pederast father is reminiscent of the over-the-top child abuse imagery in certain issues of Todd McFarlane’s Spawn.

I had it in mind that Christopher Priest wrote the series and MD Bright provided the illustrations, but each issue’s credits seem to suggest that the pair collaborated on both the art and writing chores, and the clashing art styles from issue to issue and even within a given issue seem to back this up. I do not know which of the two was responsible for which pages or panels, but the artwork is distractingly inconsistent. At times the series boasts a clean, thick-lined style that is very pleasing and fun, while other pages feature characters with excessively cross-hatched faces and anatomically awkward stick-up-the-butt poses right out of, again, Todd McFarlane’s Spawn. (If you can procure a copy of the second issue, compare Woody’s appearance on page five with his appearance on page 22—they almost seem like different species.)

Priest and Bright frequently place too much dialogue in a given panel, which is to say that there is dialogue in panels that should have no dialogue at all. An example from the first issue occurs on page 22: Eric and Woody blame one another for the dissolution of their friendship 15 years ago, and the emotions escalate until Woody punches Eric. This should be a silent panel, but instead Woody manages to say all of the following while he punches Eric once in the face: “You—moron! I lived next door to you! When did I ever call you on the phone?! I never wrote because my mom said you’d moved away!”

The odd couple contrast between the two heroes still provides an occasional chuckle. Quantum carries “Tactical field material, survival gear, evidence containers” and “comm link apparatus with redundant subroutines”, while Woody carries a beretta and a zippo, and when the two scale a skyscraper like Burt Ward and Adam West in the old Batman TV series, a crowd gathers on the street below and chants “Jump! Jump!” while a policeman pleads with Quantum and Woody not to kill themselves, assuring them that “all couples go through some rough spots”. The mildly postmodern gags are still a hoot, as well, as when Eric says “The chamber—the field modulators must be transforming us—from matter to energy—!” and Woody replies, “Wow, that’s amazing—I’da probably come up with—AAAAAAHHHH—!—or something similar.”

During the inevitable heroes-switch-bodies issue—the teaser in the preceding issue reads simply, “C’mon—you knew we had to do it”—Eric and Woody are so wary of touching one another’s penis that when it comes time to pee, they ultimately decide that it’s best for Woody-in-Eric’s-Body to use Eric’s hand to hold Woody’s penis and Eric-in-Woody’s-body to use Woody’s hand to hold Eric’s penis. Inevitably, a stranger walks in on this unlikely scene, leading to the most comical and least convincing instance of Woody’s oft-repeated disclaimer: “We’re not a couple”.

But Woody’s jokes are too often contrived or off-putting or cliché, as is so commonly the case with superhero battlefield banter. In the eighth issue, he arrives at a tense hostage crisis in a blast of energy beams and says, “‘Sup. Somebody order a pizza?” On the next page, he places a gun in a hostage’s face in the mistaken belief that she is one of the terrorists. Turns out she’s a cop, and so the real terrorist among the hostages points a gun at the back of Woody’s head. With his gun under the policewoman’s chin and with a terrorist’s gun pointed at the back of his skull, Woody says to the policewoman, “I was thinking later, we maybe get a drink or something.” In the fifth issue, a policeman says, “We just got an emergency call—we could use a hand.” Woody applauds.

The highlight of the series remains the three-page disclaimer that opens issue four. Woody explains to the reader that Acclaim editor-in-chief Fabian Nicieza bristled at the word “nigger” in the issue’s script. “We can shoot as many people as we want,” Woody notes. “But as soon as we use this word—Fabe starts having meetings.” Quantum adds, “I don’t like the word. I don’t use the word. I don’t believe in the word. It’s a word that absolutely should die. But… the word comes from the problem, not vice versa.” Woody doesn’t even use the word “nigger” in the disclaimer—he holds up a sign that reads “N-word”. (Later, one of the Quantum and Woody trade paperback collections would be titled Holy S-word! We’re Canceled!).

The thrust of the disclaimer is that, for issue four at least, “nigger” has been replaced by “noogie”, so that no one will be offended. In three humble disclaimer pages, then, Quantum and Woody manage to mock racists, their own editor, liberal guilt and the “noogie” decision itself; Woody cheerfully concludes, “A cop out? You bet.” Had the series maintained the momentum of this cutting, hilarious disclaimer for the duration of its run, the comic would be as good as I’d remembered.

I have long advocated the burgeoning graphic novel format for comics over the traditional newsstand pamphlets with their ads for video games and their ubiquitous hype for the latest company-wide crossover Event, but the time-capsule appeal of older single-issue comic book advertisements cannot be denied. Quantum and Woody mostly includes ads for other titles from the short-lived Acclaim Comics, including series based on the television program Quantum Leap and Kevin Costner’s Waterworld, plus such unfortunately titled comics as Ninjak and X-O Manowar. (In a Comic Book Resources interview from 15 September 2000, a self-deprecating Mark Waid said, “Kurt (Busiek) followed Marvels with Astro City. I followed Kingdom Come with X-O, Manowar. Good plan.”)

The only series I recognize from these ads is Bloodshot, which featured an undead vigilante filled with nanomites to rebuild his frequently bullet-ridden flesh. As I recall, Bloodshot eventually figures out that the flesh the mites reconstruct needn’t be his own—he stuffs ground hamburger into a chest wound in one issue, and in another issue he wakes in an alley to find that a cat is chewing on him, so he rips the cat apart and stuffs its pieces into his decimated carcass. Likewise, Quantum and Woody takes chunks of various genres and media and tries to construct something whole and new, and had you asked me back in the late-’90s or even as recently as a week ago whether Priest and Bright were successful in this endeavor, I’d have answered with a resounding affirmative. Now I know better, unfortunately.

Considering Quantum and Woody was such a cult favorite, it’s surprising that the internet offers so little in the way of retrospectives and reminiscences. I did come across a brief Quantum and Woody tribute from comicsbulletin.com. (“Whatever Happened to… Quantum and Woody??”, by Craig Lemon). Beneath its title, the essay is attributed to Craig Lemon, but then at the end of the piece it’s signed Brandon Thomas. Whoever he is, the author notes that one of the cleverest bits of business in Quantum and Woody is that the white guy is streetwise and gruff, while the black dude is well-to-do and out of touch. Lemon or Thomas then notes, “The game is changed and the characters seem that much richer because their personalities weren’t swiped from the nearest television program or after-school special.”

I would counter that Eric and Woody’s personalities were swiped from the nearest television program; you cannot take two played-out archetypes—the straight man and the goofass, in this case—and make them wholly unique simply by switching their ethnicities. Or maybe you can, but Quantum and Woody proves that Christopher Priest and MD Bright cannot. Michel Gondry’s decision to cast Kate Winslet as the eccentric weirdo and Jim Carrey as the anxious conservative in Eternal Sunshine of the Spotless Mind was inspired storytelling, but those characters boasted a richness and a depth that Quantum and Woody lack. You cannot get “gosh-wow” results by switching actors from one tired sitcom role to another.

All that gets you is a tired sitcom.