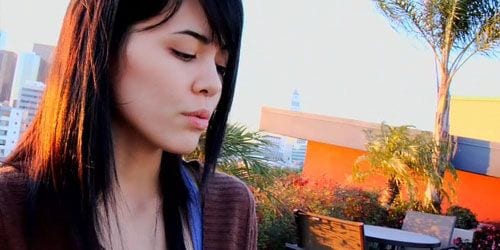 Pricilla Ahn
When You Grow Up
Blue Note

What is perhaps most remarkable about this sophomore full length from Priscilla Ahn is the artist’s ability to craft contemporary confessional songs that are honest without being abrasive; gentle yet capable of achieving maximum emotional impact.

A large part of growing up is arriving at a comfortable level of self-honesty, and this becomes one of the album’s thematic centers. Witness “One Day I Will Do”, in which the protagonist admits not only to her own confusion with the world around her but also her own fragility, her own imperfections, and her ability to recognize both. She also breaks through self-deception with aplomb on “I Don’t Have Time To Be In Love”, a track that is as sadly beautiful as anything on Aimee Mann’s Bachelor No. 2. In fact, if there’s a single obvious influence found here it’s Mann –– whether the aforementioned tracks, the “One”-ish “I Will Get Over You”, or the guiltless celebration of lust and longing, “Vibe So Hot” (written by the inimitable Benji Hughes).

Ahn also gets to stand shoulder-to-shoulder with peers Eleni Mandell and Inara George, two women who are currently crafting records that are unapologetically rooted in tradition –– in fact, Ahn wouldn’t be out of place as a member of The Living Sisters beside Mandell and George. Her collaboration with George, “City Lights (Pretty Lights)” is a gentle, acoustic number carried by a haunting melody and lilting guitar figure which combine to lend a sense of timelessness to the number. And her collaboration with Mandell, “Oo La La”, carries an emotional weight and wit that belie the tune’s throwaway title.

Growing up, of course, doesn’t mean that one has to lose touch with their imaginative self, which Ahn demonstrates in “Elf Song”, in which she shows off the full power of her overwhelmingly pure voice. Although it helps that the material here is of a rather high quality, it also helps that producer Ethan Johns (The Jayhawks, Ryan Adams, Laura Marling) recognizes that the real strength here is Ahn’s voice. Unencumbered by the trappings of over-production or sub-par material, Ahn’s voice creates an unbreakable bridge of intimacy between listener and artist.

Arrival –– whether it be at the threshold of an artistic high point or the threshold of adulthood –– is a nagging and sometimes cruel mirage that can easily elude one for an entire career or a lifetime, and in both cases, that lack of arrival is perhaps the greatest gift. Without it, we are given something to continue striving toward. It’s that sense of the incomplete that informs the body of songs here, that informs the lushness and the sadness, the fullness and the emptiness of Priscilla Ahn’s work –– perhaps best encapsulated here in the haunting “Empty House” –– and demonstrates why her promise and abilities seem boundless and bright.

Ahn has a promising career ahead of her, and this effort demonstrates the broad range of her talents and the depths to which those talents extend. What’s better is that she’s only just begun.