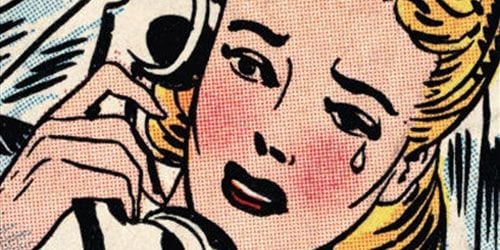 Most people don’t stand outside their girlfriend’s window with a boom box held aloft or interrupt a wedding to make off with the bride, but that doesn’t mean romance doesn’t exist. It’s out there in living rooms and kitchens and bars and restaurants and everywhere people in love gather, but it doesn’t look the same as it does on TV. Still, pop culture’s ideas of romance shape our expectations and give us ideas of what we might want from a significant other — if only reality didn’t get in the way.

From 1947 to 1977, romance comics offered four color visions of romance for millions of readers. These comics were among the best selling titles on newsstands, with some 527 titles fighting for America’s dimes at the height of their popularity. Editor Michael Barson’s Agonizing Love is a great collection of these stories, and includes in-house ads, advice columns and covers, all gushing with over-the-top sentiments like, “I exchanged a few moments of bliss for heartbreak and DISGRACE!”

In many of these stories there’s an emphasis on playing the field, in which parents tell their daughters (the protagonists are always female), “[You] don’t want to confine yourself to one boy during the time you should be dating dozens of them.” This sounds counterintuitive to our modern image of the repressed world of the ’50s, but the idea is that the more boys a girl dates, the better equipped she’ll be to choose the right husband, another prominent theme.

“Are You Ready for Marriage?”, from 1950’s Boy Meets Girl, is a quiz in which new brides learn if they’re “mature enough and understanding enough to make the kind of wife your husband desires.” Every “correct” answer, of course, is to do whatever he wants, like doing housework while he listens to the boring cattle reports. This mindset isn’t surprising to anyone who watches Mad Men or has grandparents, but it’s still difficult to imagine this reality. Old horror comics were meant to shock, but these stories offered advice and instruction — a much more dangerous form of influence.

There’s no denying that these kinds of attitudes in comics yielded real world results, just as there were kids who were sure they could fly, but this doesn’t diminish the quality of the work Barson has collected, here. There are beautiful scenes of handsome men and elegant women embracing at sunset, eyes awash in tears and romantic tensions flaring.

The story “I Was Engaged to a Puppet!” from My Love #4 (1950) features a moody, sinister splash page of a man being controlled by his puppet master mother while his fiancé looks on, helpless. The art and writing here is as good as the best of its contemporaries, but much of it is listed without naming an artist or writer. Such credits weren’t common place at the time, but can often be found with research.

Bill Everett, creator of the Sub-Mariner, signed his name on the opening page of one story, as did the team of John Severin and Will Elder. These aren’t obscure artists, they’re giants of the field, and they’re not even mentioned. Jack Kirby and Joe Simon, pioneers of romance comics, given their due in the text, but otherwise the creators of these comics are overlooked.

Barson’s text reads like Stan Lee’s Bullpen Bulletins, breezy and fun, but unbelievably corny. There’s no analysis of the changing dynamics in the dating world or the representations of women as marriage-hungry opportunists. If you’re looking for jokes about mothers-in-law then look no further. If not, skip ahead to the comics. Then you’ll learn how to love.