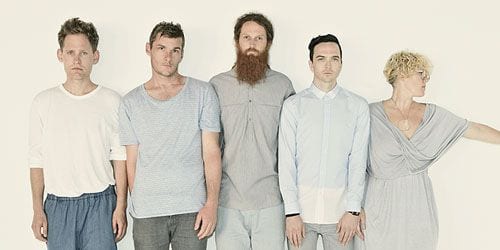 The progression to Architecture in Helsinki’s fourth LP is one towards rhythm, away from the emphasis on melody characteristic of their first couple albums. Their vocals on Moment Bends are back to pop, a dial-back from the amped-up-Muppet vocals on 2007’s Places Like This, but they also have R&B tendencies and occasional bursts of hyperactivity. Right from the first song, “Desert Island”, the atmosphere is that of a vacation. The synths and pace scream of contentment. The desert island they’re singing about, though, is one we create ourselves. If there’s a theme to the LP, that’s it: creating our own space. “We built our own utopia, baby,” they sing. In a pseudo-Caribbean soft-pop way, the song also builds a groove. The sound of that utopia is a carefree one, a relaxed one, that also recalls images of every cheesy tourist ad or vacation promo you can think of.

The album is musically in the vein of future island funk/disco meeting ’80s synth-pop. It sounds occasionally like Talking Heads or Orange Juice, but also like soft-drink ads, kids’ TV show themes, and even Prince. “That Beep” (a single originally released in 2008) actually reminds me of an indie-pop version of a Black Eyed Peas song, with its “You’ve got that beep / That beep / That bo-bo-bo” chant. The opening to “Denial Style” actually reminds of New Kids on the Block. In spirit, they’re channeling positivity and imagination, leaving some room for both nightclubbing and crying (“You put the ache in make-believe,” one memorable lyric says). On the one hand, there are love songs (albeit with computers talking and, I imagine, lots of hairspray). “W.O.W” is a sweet love-letter, its title from the line “I caught you walking on water.” “Sleep Talkin'” offers pillow-talk of a sort, but again, awfully sweet.

On the other hand, they seem obsessed with escape — with vacations, with dreams, with visions of UFOS. Often the lyrics are not as happy as the music sounds. Even when the sound emulates paradise, the lyrics will be about dreams crashing down to earth, or about love not working as beautifully as you imagined. In these fanciful new wave songs are broken hearts aplenty, and people being let down. Music is about imagination and escape, but also getting in touch with reality. As they sing on “Yr Go To”, “We were living in doubt / It took a sentimental melody to figure it out.”

The album’s last song, “B4 3D”, strikes an especially dour note at first, but it also winds up encapsulating the subject matter of the rest of the album in some metaphysical way. In the song are planets, time, and foreign lands, but also a bittersweet love letter. Singer Cameron Bird’s voice is lower, stranger, sadder, and makes him sound like a computer. He begins, “When I found out that each and every one of you were dead / Wrote a letter to the universe instead.” The song paints Moment Bends‘ excessive voyages into dreamland as merely an attempt to dream away heartbreak. They’re creating this bright cartoon world to block out the darker, sadder real one.