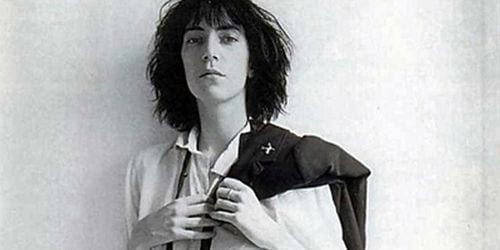 She was, and is, part poet, part punk and part shaman. Patti Smith’s work brought us Rimbaud with a rock ‘n’ roll sensibility, the earthy, sticky, loud, sexy, religious, and controversial poetry of Smith blazed up with the guitars of Ivan Kral and Lenny Kaye. If poet and mystic William Blake could have had access to some electric guitars, the result would have sounded, and felt, a lot like Patti Smith.

In a career born out of the New York that Andy Warhol had left in his wake, Smith is one of the oddest members of the pantheon of classic rock ‘n’ roll. In some respects the heir of Jim Morrison, she burst onto the scene when, sure, girls could rock — but only if you were leather-clad, blonde and exuded Lolitaesque sensuality (think Suzi Quatro and Cherie Curie).

Smith was none of these things. She had a voice as angular as her unfailingly fascinating facial features. Her lyrics usually had too many sharp edges to ever become anthemic. Only one song, the immortal “Because the Night” she wrote with Bruce Springsteen, ever became an FM standard.

Dave Thompson’s new work offers a gloss and an interpretation of her early career. Dancing Barefoot: The Patti Smith Story is part biography, part evocation and elegy for a time and a place and part full-on, flat-out fanboy tribute. He admits up front his love and devotion, noting that one of his early forays into rock journalism involved editing a Smith fanzine.

It’s a tribute to Thompson that he doesn’t allow his lifelong interest in Smith to interfere with the seriousness of the work. Indeed, it allowed him to write a book that, unlike some previously published materials on the rock legend, refuses to chase down every story of who she slept with, when and for how long. The personal only enters when it connects to the work, and shaped Smith’s artistic output, performance and persona.

Thompson’s instinct on this is good and the book steers clear of the gossip sheet tendencies of many a rock biography. The “feud” with The Runaways gets the two short paragraphs it deserves and the 1976 “food fight” press conference but a few sentences. The long-running affair with Sam Shepherd is only discussed in context of her developing poetic voice. Even her horrific stage accident in 1977 is contextualized into the eventual fate of the Patti Smith Group and her long withdrawal from public life.

Its not surprising that her relationship with Robert Mapplethorpe gets a lot of attention, given the importance of Smith’s recent memoir Just Kids. Even here, the focus is on how they helped to develop one another’s artistic vision.

Thompson also gives due attention to the significance of Mapplethorpe’s photograph that became the cover of Smith’s debut album, Horses. Thompson notes how this image helped to define Smith for the emerging punk movement and became one of the most iconic rock album covers of all time.

Thompson admits up front that the book will feel a bit unbalanced to some readers, and it does. Around 180 pages deal with her the emergence of Smith’s career through the ’70s. The balance of the book moves swiftly, indeed at breakneck speed, through the last thirty years. There are some meaningful insights here but you find yourself wishing that the author had dwelt a bit more on the ’70s and simply made this a close study of Smith’s early career.

This strategy would have given him more opportunity to write about the early albums. I wanted to hear more from Thompson on the actually process of writing an album like Horses, both from the perspective of Smith as poet and as collaborator with her band mates. Her time as a rock journalist for Creem also gets short shrift, so much so that Thompson writes about this before he even introduces it.

These quibbles aside, I must confess to already being a fan of Dave Thompson’s writing, especially when he is riffing on something he adores. I was less than enthusiastic about his recent I Hate New Music, although much of even that grumpfest is smart as hell and destined for the canon of classic rock writing. But I’ll take this valentine to Patti over the “Hey, you kids…get off my lawn” tone of that earlier work.

This is in part because even when Thompson is gushing, he doesn’t gush…he writes love letters of sparse gravity and haunting beauty. Take for example his description of Patti’s discovery of the Stones and Keith Richards. He writes that Richards circa 1965 was “Still looking like the slightly hip economics student he used to be, but all the more alluring for the snatches of shyness that hung around his deep-set eyes.” Writing like this captures something about Richards, something about an era in rock music and something about why a young, alienated Smith would develop such a devotion to the Stones, indeed desire to become them.

Some critics may take issue with Thompson’s use of so many of Patti Smith’s own words, drawn from her own writings and from other biographical works. I found it a very useful literary device that, again and again, moved along the narrative. The author’s chosen focus on the development of Smith’s career risked becoming a plod through influences, key performances and albums. Smith’s own voice kept things alive and moving.

Dancing Barefoot comes with a wealth of photographs, though most will already be familiar to Smith fans. We also get a thorough discography and bibliography. The latter is most interesting as it provides us guidance into Smith’s published work in poetry, memoir and music criticism. After reading this book, you will want to dig into more of that. Indeed, Thompson makes you want to dig into it. The discography is standard but complete, with every single, album, compilation and even the major bootlegs mentioned.

Certainly the book to read on Smith is her own Just Kids. It covers much the same period as Dancing Barefoot and offers many a secret code word into understanding her oeuvre. Still, Thompson’s work is an excellent companion volume to that memoir and must be on the shelf of every serious Patti Smith fan, indeed anyone fascinated with classic ’70s rock.