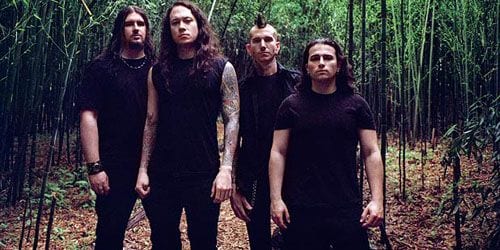 In the past, Trivium has been accused of many things. Most notably, the band’s affinity for the heavy metal stylings of Metallica was frequently pointed out, especially on records like The Crusade and Ascendancy. With 2008’s Shogun and now with their latest, In Waves, the band seems to be moving past the thrashier elements of their early records. Shogun didn’t completely abandon the Metallica influence, but it was far less prominent than it had been on prior recordings.

In Waves, on the other hand, seems comfortably set in being a through-and-through metalcore record. All of the requisite elements of such an album are here: the brief, pseudo-classical instrumental interludes, alternated growling/clean vocals, pounding double bass, and heavy riffs. After beginning with the foreboding, piano-led “Capsizing the Sea”, the album proper begins with lead singer Matt Heafy screaming “IN WAVES!” followed by a sledgehammer-heavy riff. It’s an appropriate and fitting introduction. Unfortunately, not long after the seemingly portentous opener, the album begins to sound less and less intense with each song, namely because the band doesn’t take the time to have much variance in the album’s 18 tracks.

Though devout Trivium fans will more than likely purchase the album’s special edition, the extra five tracks the special edition includes end up weighing the entire record down. Each track is just more of the same, even the cover of the Sepultura classic “Slave New World” sounds just like the rest of the music on the record. Throughout the album the band seems to be firing on all cylinders with pounding blastbeats and heavy riffing, but despite their best efforts nearly every song on the record blends in with the one before it and the one following. As Heafy bellows “Chaos reigns!” amidst one of the album’s many downtuned jams, one wishes that the band would follow likewise. The music here isn’t terrible, but when an 18-track album is dominated by one unchanging sound, it’s hard to get too far into the record. Amidst the flurry of typical metalcore, the one unique moment on the album is one of the few instrumental interludes, “Ensnare the Sun”, which sounds akin to progressive metal band Ayreon. That one minute and 22-second interlude, though, is but a small pause in a very long record. (The regular edition of the CD still feels quite long at 51 minutes).

Many of the album’s highlights come early for this reason. The title track, while prototypical metalcore, is still a fine choice to open the record. The hook is great, as is the lead guitar part, which still shows echoes of the twin-guitar harmony the band has relied on in the past. “Black”, although sounding similar to some of Avenged Sevenfold’s regrettable recent work, features one of the album’s thrashiest riffs. Interestingly enough, “Black”, like most of the record, spends more of its time developing a catchy chorus instead of bludgeoning the listener over the head with intensity. In an interview with Guitar World last fall, guitarist Corey Beaulieu noted of the record, “we’re making sure every part in every song needs to be there and is super-catchy and doesn’t go over people’s heads.” While it is true that metal can often become preoccupied in its heaviness, this album takes a lot of time crafting memorable, near sing-along hooks. The band could have been better served by perhaps balancing the heavy material with the radio-friendly; for the majority of the record, though, the latter seems the most dominant.

The album’s finest track comes at its midpoint in “Caustic Are the Ties That Bind”, the album’s longest track. The song is the most multifaceted thing on the recording; while lacking the depth of the suite-like tracks that bands like Opeth excel at, the song is still a much appreciated diversion from the rest of the album’s homogenous sound. Like rest of the songs, it does have something of a catchy chorus, but unlike the rest of the album it takes the time to develop into a slower section, culminating in another display of the tired-but-true twin guitar theatrics.

The music on In Waves isn’t horrible; it’s just nothing we haven’t heard from this band or any other band like them before. There are plenty of great elements present throughout the album: heavy riffs, solid hooks, and excellent guitar melodies are in no shortage here. But instead of expanding them into something other than what those elements are typically used for, Trivium plays it safe for the entirety of the record. As intense and heavy as they try to be on each song, the heaviness loses its effect when every song prior to it wielded it just the same.