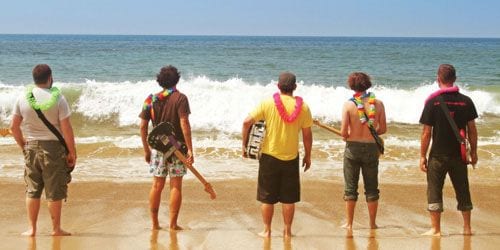 Calls for an upheaval of a music industry that prioritizes profit over artistic ability have been heard by plenty of artists over the past decade. Amidst all the talk, there have actually been decisive actions to change the way we buy and listen to music. Radiohead’s “pay-what-you-can” experiment with In Rainbows was a significant success. Two of this year’s finest releases, The Weeknd’s House of Balloons and Frank Ocean’s Nostalgia, Ultra were released for free on their artists’ respective websites. And while multi-platinum pop artists still manage to do very well, independent musicians who are making music for the sake of music are still able to craft and release great records. Bomb the Music Industry! takes the independent artist spirit quite seriously; not only is their name a rally call for an overhaul of the cold professionalism of modern music labels, the band even has released the majority of their studio output for free on their website. (The pay-what-you-can concept that Radiohead popularized was actually done by this band prior to the release of In Rainbows).

Vacation, the band’s sixth LP, is more indicative of the album title than the band’s name. The music, while very good, is by no means a complete 180 from anything that’s been done before. The album’s ska-tinged punk isn’t too far off from the band’s past outings, nor is the record full of calls to arms against the music industry. The most unconventional thing does is end the album with 25 minutes of silence with random bits of the band’s banter. The music does, however, sound like a perfect vacation accompaniment; the album’s optimism, shown effectively through the use of glockenspiel and buzzy synths throughout the record, is evocative of beaches spent on summer’s shores, not unlike the one on the album’s cover art. Quite aptly, Vacation is one of the most summer-sounding records of the year; it’s a record that sounds like it was a blast to record and, as a result, is a great joy to listen to.

The album’s sunny disposition starts with the very first track. “Campaign for a Better Next Weekend” begins with a piano part that wouldn’t sound out of place on a Coldplay record. Fortunately, instead of transforming it into one of Coldplay’s syrupy-sweet inspirational pep songs, the band uses that to build up into a glorious, guitar-driven climax, with power chords kicking the song’s sanguine tone into overdrive. The song sets the stage and mood for the rest of the record, while also keeping the album grounded in a sense of honest happiness instead of idealized fantasy. Even when the songs venture into the more pop-oriented punk (such as “Can’t Complain,” which recalls some of Relient K’s earlier material), the merriment doesn’t sound forced.

Throughout the record, the band recognizes the reality of hard times, even as they try to withhold cynicism over the difficulties that face the world. “So leave me here; you can just leave me here / To find something new so I don’t feel as good as dead”, vocalist Jeff Rosenstock sings on “Vocal Coach”. The adversities of the past and the present can be seen clearly throughout the entire record, but the band doesn’t let what many see as bleak times overpower their positive energy. When Rosenstock sings, “And I’m glad it wasn’t like that summer when everybody died” on “Sick, Later”, one can only laugh at how he seemingly brushes off the things that would haunt most people. Given the harsh economic climate the world faces, not to mention the multiple wars being waged, it’s nice to see a band, especially a punk band that’s been no stranger to cynical observations, with something of a smile on their face. And there’s no better time to express that sentiment; summer records tend to be the best time for exuberant music. The brief interlude “Sponge Board/Baby Waves” recalls summer favorites The Beach Boys with its vocal harmonies. “Why, Oh Why, Oh Why (Oh Oh Oh Oh)”, with its vocal filler-driven chorus, also harkens back to the music of the ’50s and ’60s, songs that didn’t take the time to be pretentious or complicated and instead took the time to be just plain fun.

This mood continues on for the entirety of the record, even during the album’s slower moments. Album highlight “The Shit that You Hate” interestingly mirrors LCD Soundsystem’s “New York, I Love You, But You’re Bringing Me Down” in its slow pace leading to an explosive finale, as well as its witty, self-deprecating lyrics. The song sings of “black sea monsters” but ultimately comes to recognize that “sorrow don’t answer problems”, ending with a rousing chorus of “The shit that you hate / Don’t make you special!” Like “Campaign for a Better Next Weekend”, it demonstrates the band’s skill with dynamics: beginning with a softly strummed acoustic guitar and a cracked vocal, the song eventually explodes with a burst of horns, electric guitars, and a shouted chorus that is bound to be a live favorite.

While the album’s optimism is impressive, what is equally impressive is its tenacity; the band fires on all cylinders until the album’s end. Even during the album’s less impressive moments (“Everybody that You Love” and “Savers”, both dependable but unimpressive punk jams), the band is still giving the music their all.

Although Bomb the Music Industry! may not have laid waste to the music business with this record, they have made an incredibly enjoyable listen that is clearly a product of talented musicians who love their craft. Now that may not be a bomb to the music industry, especially since there are many such artists making music today. But even if the band isn’t mounting an attack as their name suggests, they are making great music, which, given the quality of this record, is just as fine.