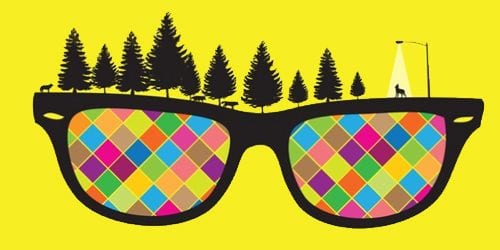 Emo’s night club is one of those classic juke joints that helped give Austin its moniker of “live music capital of the world”. It’s a bit on the run down side these days, hence the spiffy new Emo’s East that opened this month, followed by an announcement that the original Emo’s will be shutting down after SXSW 2012. The Wild Frontier Fest was an opportunity to experience the old Emo’s in all its soon to be bygone glory.

Music alternated back and forth all day between the venue’s larger outdoor stage and smaller indoor stage, which kept the music going nonstop. The lineup was stacked at the end of the night with three of Austin’s finest local bands, all of whom have been touring nationally and earning buzz to place them on the verge of a major breakthrough.

Alt-rock trio Ume were named by Rolling Stone this past summer as one of the nation’s sixteen best unsigned bands, largely due to charismatic singer/guitarist Lauren Larson. The waifish Larson doesn’t at first glance appear like someone who’s going to rock your socks off, but once she gets that guitar in her hands she turns into a dynamo of energy that captivates the room every time. She’s backed by a strong rhythm section in husband Eric Larson on bass and drummer Rachel Fuhrer, both of whom are content to play for the song. The trio have recently released their much-anticipated debut LP, Phantoms, which conjures a dreamy psychedelic yet hard-rocking grungy sound that seems like it could be a lost classic from the early ’90s. Bands like Belly, Sonic Youth and The Breeders come to mind, yet none of them rocked as consistently hard as Ume does.

The band hit the indoor stage a few minutes shy of their scheduled 10:25 pm start time, clearly eager to get rocking with “The Push”, which features some of Larson’s best riffage. Austin is a major college football town though, and Emo’s caters to that audience as well with the final minutes of the Michigan-Notre Dame prime time clash playing on the flat screen above the bar. It’s great to be able to watch the end of the game’s tight finish while simultaneously being able to take in the show, which recalls a similar setup at the Austin City Limits Music Festival. You’ve got to love a town that caters to both music and football at the same time.

“Rubicon” is another big riff rocker where the band’s relatively unique formula is crystallized — sharp guitar riffs building into a wall of guitar sound over a big beat, heavy low end and spacey vocals that create a majestic yet hard rocking sound. Lauren Larson’s energetic headbanging at times recalls AC/DC’s Angus Young, although in a much more attractive package. It’s clear that Ume has a winning formula and compelling sound. If there’s anything to critique that could be holding the band back, it might be how Larson’s vocals are constantly drenched in a deep reverb that makes it a challenge to discern her lyrics. The tunes also tend to fall into similar tempos and formats. But there’s a sonic energy that makes the band stand out, suggesting bigger things are on the horizon.

This rocking quartet have been around a little longer and have become known as one of Austin’s top attractions. The band’s blend of a classic rock sound (featuring the dynamic Rickenbacker bass from Steven Terebecki) with a swash of other influences from psychedelic to prog rock to dub, soul and jazz have made White Denim tough to pigeonhole. The common denominator in their sound seems to be a melodic rock shimmer with dynamic counterpoint interplay, a sound that grows more infectious each time you see the band.

A very high level of musicianship is on display from the start of the band’s set, which began on the outdoor stage just as Ume was finishing up inside. The songs are filled with big chords and tight changes, and there’s a seamless flow as many of the songs segue into one another. This enables the band to keep building steam throughout their set in a way that most of their contemporaries lack. The large crowd doesn’t at first seem to be as into it as they were at the band’s recent show at Antone’s, but a huge cheer at the end of a big jam demonstrates that the audience is indeed captivated.

Guitarists James Petralli and Austin Jenkins are a great team, riffing off each other and playing complimentary parts that give the songs a deeper sound than your standard blues rock. Drummer Joshua Block and bassist Terebecki make a formidable rhythm section, pumping up the grooves time and again until the energy of a song explodes. Terebecki in particular is a force to be reckoned with, bringing the prog rock lead bass skills of masters like Yes’s Chris Squire and Jefferson Airplane’s Jack Casady to mind.

The tight rocking jams kept building the set’s energy level higher and higher, showing White Denim to be playing at a higher level altogether. Singer Petralli runs out into and around the crowd toward the end of the set, taking what seems like a couple of victory laps. And why not? White Denim has been absolutely crushing it, and it seems only a matter of time before the band gets their national due. The band’s new album, D, is a tour de force of psychedelic rock ‘n’ roll with experimental and progressive flourishes that is one of the best rock albums of 2011.

White Denim are a tough act to follow, but if anyone could cap the evening off with an even more psychedelic presentation, The Octopus Project would have to be it. The band is more experimental and features psychedelic light projections that offer great eye candy to go with the band’s trippy tunes. Their 2010 album Hexadecagon was constructed as sort of an epic suite with a variety of mood swings, and their set here seemed to draw from that vibe as well.

The band’s indietronica pop sound doesn’t rock like White Denim, but still stimulates the senses in compelling fashion. A combination of nifty beats, swirling synth sounds and trippy lighting effects made for a strong show. Keyboardist Yvonne Lambert also brought a theremin into the action, using it for the lead melody over one particular harmonious groove that made for one of the evening’s top highlights. Another tune was said to be about a guy who’s last thought was captured right before he died, which led to a big psyche jam with oscillating synth parts and more trippy lighting that seemed to approximate another dimension.

The Wild Frontier Fest was slated to run for another full day on Sunday, but it was hard to imagine that there could be a more entertaining trio of diverse yet complimentary headliners like Ume, White Denim and The Octopus Project.