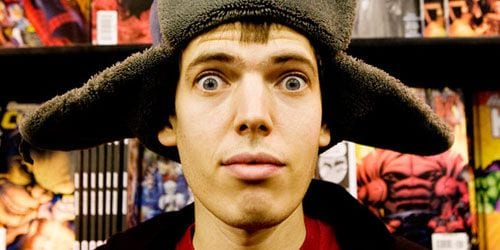 Jeffrey Lewis
A Turn in the Dream-Songs
Rough Trade

If all is fair in life, then Jeffrey Lewis will one day be Poet Laureate of New York City. Much is made of Lewis’ songwriting prowess (that notable English wit Jarvis Cocker once called him “the best lyricist working in the U.S. today”), so this statement could be considered only mildly outlandish. Still, if Lewis were in contention for the position, we must believe that his songs speak the truth, and, unfortunately, as evidenced on new album A Turn in the Dream-Songs, Lewis is still suffering from plenty of disrespect. The truth hurts, and no one illustrates honesty more colorfully than Lewis.

Lewis’ previous release, 2009’s ‘Em Are I showed a progression in the musical aspect of the anti-folkie’s work. In a recent interview with British newspaper The Guardian, Lewis mentioned that A Turn in the Dream-Songs marks his first foray into writing pop songs, i.e. songs with musical, and not just lyrical, panache. However, songs like “How Can It Be” have groundings in older Lewis material, whether it be ‘Em Are I standout track “Broken Broken Broken Heart” or City and Eastern Songs‘ “New Old Friends”. So while Lewis is (thankfully) trying new things, A Turn in the Dream-Songs guarantees much of that homespun Jeffrey Lewis charm, or as much charm as someone with a voice as whiny as Lewis can hold claim to.

“How Can It Be” has the additional allure of backing vocals from Dr. Dog, who gives the song an edge over its predecessors by emphasizing harmony as much as word wizardry. Other songs, such as “Boom Tube,” are even riskier outings for Lewis — they contain neither lyrics nor any quirks that would classify them as anti-folk. It is moments such as these — even more so than lyrical ingenuity — that elevate A Turn in the Dream-Songs above Lewis’ previous efforts.

As for the songwriting, Lewis still remains inventive in both subject matter and finding new ways to address topics like love and depression. Hidden track “Mosquito Mass-Murderist” is a rap (another Lewis first) about killing mosquitoes. “Krongu Green Slime” is essentially a protest song, but its allegorical quality prevents it from becoming too irksome. “Cult Boyfriend” is an album highlight, a wry take on having a love life populated by a few die-hard devotees. Lovably self-deprecating lines such as, “If I really were that awesome, wouldn’t more people think so?” could even compel a few kindred spirits to join OK Cupid on the off chance that Lewis might be a member and is game for comparing self-esteem issues with you. “So What If I Couldn’t Take It” is quite possibly the silliest song about suicide ever, and one that throws in a jab at Pitchfork at that. There are many times in which the album verges on being too truthful for comfort, most notably on “When You’re By Yourself”, which could be an anthem for permanent bachelors and bachelorettes. More hopeful songs, such as “Try It Again”, still retain a bald honesty strong enough to elevate the album from being just alright to something quite special.

Although it would be lovely if Jeffrey Lewis were to find love and happiness and release an album full of cheerful songs of alarming self-confidence, we can take comfort in the fact that Lewis has such a novel way of expressing his darker feelings. Judging the innovations showcased on A Turn in the Dream-Songs, Lewis has plenty of tricks on reserve for his journey there. If his cult standing is inescapable, at least to the select few who treasure Lewis’ every bon mot he will forever be a voice of truth and comfort.