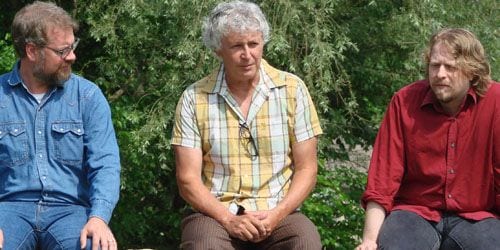 As Robert Pollard’s attention shifts, at least partly, back to Guided by Voices (who, post-comeback tour, have two studio LPs due next year), he has brought his trio Boston Spaceships to a close. The chief, but definitely not only vehicle for Pollard’s creative impulses the past few years, Boston Spaceships consisted of Pollard, John Moen, and Chris Slusarenko. Their hallmarks were the use of older castoff Pollard songs and compact, energetic, tuneful pop-rock. All four of their albums before this one have meandered less than a lot of Pollard’s other post-GBV projects, though they were just as driven by his surrealist streak, collage impulse, and sense of humor.

Where their others were all 40 minutes or so, Let It Beard is a 70-plus-minute double album. The promotional talk and reviews have made it sound like a tightly constructed epic, but it feels more like a reservoir of everything left, a junkyard of new ideas and familiar Pollardisms. There are several melancholy slow songs and a variety of slightly warped, somewhat feel-good rock songs that sometimes blast away, sometimes give you something to hum along to, and sometimes drift off. There are joke lines (“Jason ate a lot of meat from cans”), surrealist ones, and the usual mix of heavy guitar riffs with pop melodies and oddball imagery. There are also guest stars: J Mascis (contributing an on-fire guitar solo at the end of “Tourist UFO”), Colin Newman, Steve Wynn, and others.

A few songs do feel like fresh territory for Pollard. “Chevy Marigold”, with backing vocals from Tahoe Jackson, is like Pollard’s version of Exile in Main Street, but deep down still a pop song. “German Field of Shadows” gets especially thick with dark atmosphere, like the Circus Devils’ mania channeled into more driven rock.

The most remarkable thing about Let It Beard is how it feels both excessive and restrained. Like the other Boston Spaceships albums, it has the demeanor of being brisk and focused, even while it’s 26 songs long and certainly lies fairly far off any conventional rock’n’roll road.

The songs that make the strongest impression are those where the melodies seem the most driven and carefully crafted, closest in feeling to the later GBV albums (but not, perhaps, to the next one, judging by the sound of the first single “The Unsinkable Fats Domino”, which self-consciously looks further back in the band’s discography). There are several of those here: the single “Tabby and Lucy”; the Who-like “Minefield Searcher”; “Make a Record for Low Life”, a great tune that sinks its way into your brain; and “Christmas Girl”, which has a melody that soars but is also sad, Isolation Drills-ish. “Speed Bumps” adds to Pollard’s recent trend towards songs about everyday life, in this case people’s driving habits. Other songs similarly allude to garage sales, cooking, and getting the mail. Pollard is, at the end of the day, a 50-something-year-old Ohioan.

There also are moments of true spaciness, be it spooky or wistful, that reveal a lot of strange beauty, whether it’s the five-minute “Let More Light into the House”, the 90-second “A Dozen Blue Overcoats” (which explodes right at the end) or, my candidate for the song that sneaks up on you the most, the two-and-a-half-minute “No Steamboats”. Let It Beard excels for the fact that it sprawls but also punches, that it feels both careful and ragged. In its imperfect corners lie a lot of interesting things. The album’s breadth of ideas mimics Pollard’s career these days — all over the place, but still remarkable.