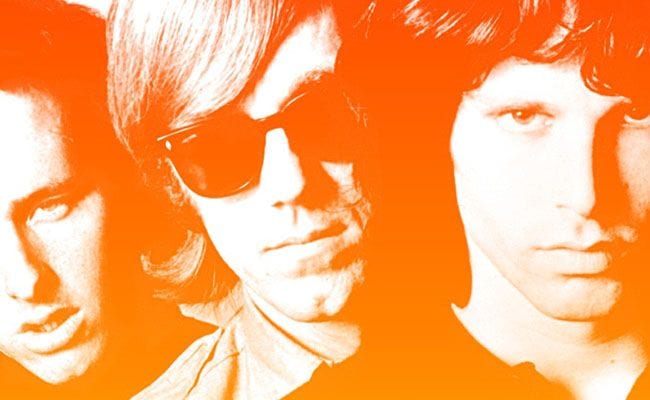 It should be said at the outset that there was no innocence lost with the Doors. Unlike Dylan, the Beatles, the Beach Boys, and even the Rolling Stones, there was no decisive transition from a sense of formal purity and early boyish virtue to musical experimentation and the hard, ambivalent experiences of touring, drug use, and fame. The Doors lived through the latter aspects almost immediately. Between the time when Jim Morrison and Ray Manzarek first met in July 1965 to the week when “Light My Fire” became their first number one single in April 1967, less than two years had passed. Compare this time frame to the Beatles, who had been together longer, but only had their first number one single in 1963 with “From Me to You” approximately three years after forming.

Moreover, the Doors did not dwell on adolescent love-me-do’s, but instead embraced an adult sexuality more physically suggestive, and aggressive, centered on innuendo and lies rather than open-hearted declarations of youthful affection. Unlike other California acts — Janis Joplin, the Grateful Dead — they were not part of the “love crowd” either, as Greil Marcus writes. The story of the Doors is therefore less a gradual narrative of emergence, maturation, and decline than an explosive episode in the history of rock, punctuated for effect by the death of Jim Morrison in Paris in 1971.

Marcus’s own narrative in The Doors: A Lifetime of Listening to Five Mean Years signals this popularity and brevity, using an unruly 1967 club performance at the Family Dog in Denver as the starting point for his book. Marcus is best known for his writing on Elvis Presley and Bob Dylan, work that has conjured an alternative history of the US by using music to speculate on the different and often darker cultural currents that have shaped the American past.

More expansively, and internationally, he has examined the rise of punk and post-punk, especially in his influential Lipstick Traces (1989), an ambitious study that offers a kind of longue durée analysis and meaning for these ephemeral moments in rock history. In short, throughout his career, Marcus has managed to traffic between the obscure and the conspicuous, even overblown, either to elevate or humanize, depending on the subject at hand.

The Doors is poised somewhat between these two parts of Marcus’s oeuvre, reflecting the status and meaning of the Doors for him. Marcus neither proposes that Morrison and company are vital for understanding the late ’60s, nor does he seek to wholly demythologize their impact. Instead, as with other icons, Marcus colors in the cultural and historical space surrounding the band.

Similar to his recent book on Van Morrison, this is a minor work in his catalog, lacking the imaginative depth and even personal interest found in his previous histories. But it stands apart from other work on the Doors, opening a world seemingly last found in Joan Didion’s classic essay “The White Album,” her personal meditation on living in Los Angeles during the late ’60s and ’70s that describes in passing a visit with the Doors in the recording studio — a brief, tantalizing thread of a moment that Marcus picks up here.

Marcus, it can be said, does not attempt encyclopedic coverage. The Doors is a short book. It does not progress chronologically in any traditional sense, but instead moves from one individual song to another, chapter by chapter, like an album. As elsewhere, Marcus is best at staging the music he talks about, setting the scene — culturally, historically, politically. We learn little about the lives of Morrison, Manzarek (keyboards), Robby Krieger (guitar), and John Densmore (drums) within and beyond the band.

We do learn about how their recordings intersect, in Marcus’s purview, with the rise of FM radio, LBJ’s Great Society, the Vietnam War, San Francisco’s music scene, Roy Lichtenstein, Thomas Pynchon, and, weirdly, the film Pump Up the Volume (1990) starring Christian Slater. Echoing the gonzo criticism of his colleague and friend Lester Bangs, Marcus’s established technique is to find that delicate balance between using context to situate the meaning of music and using music to reflect and explain the milieu that produced it. So much music criticism fails because of the absence of this social dimension, reduced to a form of cheerleading and promotion rather than popular insight. This is why you don’t have to be a Dylanologist to appreciate Invisible Republic (1998).

But this free association, reflective of the music itself, can have mixed results. It’s hard to imagine anyone unfamiliar with the Doors picking this book up — indeed, it’s hard to imagine anyone unfamiliar with the Doors — but even diehard fans may find some of Marcus’s connections to be a stretch. A show of hands: Anyone up for revisiting Pump Up the Volume? A more obvious film cited by Marcus, Oliver Stone’s The Doors (1991), makes better sense, given its influence on a generation of listeners like myself who neither witnessed the Doors or the ’60s first-hand, only to have Hollywood offer a blinkered filter of that past. But these active references also signal a distance on Marcus’s part, as well.

Although concert recollections surface time to time, his book is neither ethnographic nor a memoir as such. A number of the performances described are from recently released (since 2000) bootleg recordings, an observation that can give an abstract feel to what Marcus is talking about — you either get a contact high from what he is saying or a discouraging sense that his verbal depictions are plain filler. In both cases, you simply want to hear the music he is hearing.

This point may sound dismissive, and for the record it’s not. But I wish this book had been more forthright. The Doors would appear to be a natural fit with Marcus, given their shared California background. But Marcus has difficulty in, well, lighting a fire with this one. One gets the sense early on that Marcus himself is not putting forward an argument of any kind, but is struggling with the Doors themselves, with a set of questions that they as a band posed and still remain unanswered, perhaps unanswerable: What defines pop music? Why do some bands endure? Does culture produce the music, or music produce the culture?

These are crucial questions. In grappling with them, Marcus swings between sincerity and overstatement. “The appearance of the Doors marked a verge in the history of Los Angeles rock ‘n’ roll, of Los Angeles, and of the United States,” he writes at one point, building up to Charles Manson. “That is because in their music you could hear a portent that the future, the near future, contained stories no one imagined they would want to hear, that people would not be able to turn away from, that would keep people awake, worried at the slightest anomalous sound, terrified and disgusted by their own fantasies.” Okay, perhaps — Manson certainly helps on this occasion.

In the strongest chapter, entitled “Twentieth Century Fox”, Marcus offers an insightful, if meandering, meditation on the meaning of pop, suggesting at one point that pop culture is simply “the folk culture of the modern market.” Given the album format, such lucid remarks like this are spread fleetingly across chapters, without complete attention. Marcus cites Kim Gordon of Sonic Youth as once saying that “people pay to see others believe in themselves” to explain the meaning of concert-going, yet another passing aside, among many, that could be played out further.

Yet this book doesn’t pretend to be conclusive. Given the existing literature on the band by former members and associates, Marcus appears content with his own personal imprint, however limited. In fact, his status as an outsider, as nothing but a committed and often astute listener, offers something new and different. The liner notes to the two-disc The Best of the Doors (1985) by Danny Sugerman — former manager and co-author of the authoritative No One Here Gets Out Alive (1980) on Jim Morrison — includes intellectual references to Friedrich Nietzsche, Antonin Artaud, Orson Welles, and William Blake. We need less of this, frankly.

Marcus pushes the band away from such esoteric influences and back into the fray of a southern California of the imagination and a southern California as it actually was. He returns to a more sensual impulse of physical fulfillment that the Doors sought — an aspiration that explains their explosive nature touched upon at the start, a paradigm of self-destruction that, paradoxically, insured their longevity.

“There was a seriousness of intent that was thrilling on its own terms,” Marcus writes at one point. “There was a sense of consequences: to walk through the dramas being enacted on [the album] The Doors was to take a chance, just a chance, that you might not come out quite the same.” In a separate chapter, Marcus asks, “What does it mean to make cultural history? It means to make images and sounds, to launch ideas and sensations that feel absolutely new even if they are not. Cultural history is a matter of old forms dressed in new clothes that turn history in a new direction.” With a minor revision, this latter rhetorical question about the Doors could equally be applied to himself, to query how cultural history is to be written.

Both quoted passages attempt to capture the Doors and answer the question as to why they have lasted. But they also encapsulate, as found in this new book, the experience of reading Greil Marcus at his most energetic, at his most intuitive — to walk through his reveries, to witness new ideas and sensations, with the open possibility that you just might not come out quite the same.

TAGS Greil Marcus the doors
FROM YOUR SITE ARTICLES