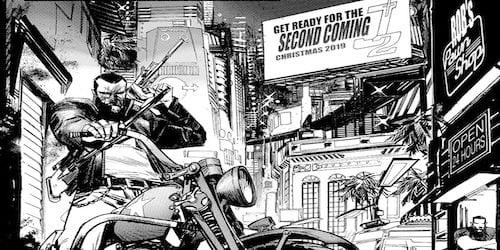 If you think Sean Murphy’s Punk Rock Jesus is in any way about Jesus, the Passion, and the prophesied Second Coming, you might be missing the point.

I say “might be”, because as far as science-fictionalizing the Second Coming and even as far as producing a believable, viable vision of a scifi tomorrow, Sean’s work is flawless. The set-up is really simple. At some point in the future, in the year 2019, the Ophis Corporation has bought the rights to the Turin Shroud and begins cloning Christ. The twist? Ophis will be monetizing this event but using it as the platform for a reality TV show. Prepare for “J2”, the Second Coming, coming live to a TV set near you.

Two things make Sean’s vision so wholly compelling, so inhumanly seductive. The first that this is a classic mode for scifi storytelling, one that throws the story into the immediate future. We’ve known since the very first scifi, since Buck Rogers and before, that scifi is really a story about the present, not the “distant lands” subgenre applied to some future time still in the offing. Philip K. Dick made this message abundantly clear a generation ago. And now, with Bill Gibson’s most recent trilogy (scifi, but set in the present, post-911 world of the last decade), we’ve brushed up against a reminder of exactly this.

Given the overwhelming shadow cast by Gibson (great authors cast great shadows), is there still a place for scifi actually set in the future? Sean’s secret triumph is to produce Punk Rock Jesus as a work that responds with a resounding “Yes!” to this question. It’s a staple of scifi, the future-world wrought from the necessary politics of today expounded and expanded, extrapolated. Call it the pre-future mode of scifi. This was one of the secret recipes for success in Frank Miller’s inestimable classic, The Dark Knight Returns — the idea that the new world Batman must confront is recognizably our own but unimaginably extended, twisted into newer, darker proportions. Sean taps exactly this mode of storytelling, and masters it.

The second aspect that makes Punk Rock Jesus so wholly compelling is individuals. Good scifi is a rare thing. In the Winter Special Edition, 2001, of The Comics Journal Spain Rodriguez offers a very personal wrestling with the genre in the autobiographical “Space Case”. What would a scifi tomorrow really look like? As a kid Spain (perhaps like us all) imagined shining cities and flying cars, robot butlers and elevated travelators that powered everyone everywhere without needing to take a step. It was the film version of Orwell’s 1984 (the one starring Jon Hurt) that changed that imagine for Spain. What he saw instead was substandard housing and very little conspicuous technological advancement. This led Spain to the idea that the latter half of the twentieth century, JFK’s assassination, landing on the moon, Hoover’s cross-dressing, might seem very much like scifi to Spain’s own Dad.

What Spain does articulate in “Space Case” is the beautiful argument for present-day scifi. But what doesn’t really shift throughout his story however, is the unspoken idea that scifi (as it does, since it deals mostly in sweeping historical vistas), more often than not chronicles large groups of people. Sean’s Punk Rock Jesus refuses this kind of genre-presupposition, narrative laziness and returns to the grander tradition of scifi. It presents individuals awash on a sea of cultural trends they can barely understand.

Amid the overweeningly arrogant backdrop of Ophis, we encounter Slate, the corporate wizard who makes this all happen. We encounter Dr. Sarah Epstein, the geneticist who’s only doing this to save the plankton and the nekton, and thereby save the world. We encounter Don Baker he ersatz-hard-edged Larry King clone (remember Larry King?), Gwen, the new Mother Mary, Tim the quirky “technical advisor” security. But mostly we encounter Thomas McKael, the intimidating castle of a man, and J2’s head of security.

No villains though. Even the New American Christians who mount violent protests outside J2 facilities, are more a lunatic fringe than any real kind of threat. Punk Rock Jesus is more about individuals riding out the waves of cultural change, more about the unforeseen and unforeseeable effects of building human culture. More about culture as a kind of demon-box, and each character recast as a particular nuance of Pandora.

This is really the point where the “might be” resurfaces, the moment when we realize we “might be” missing the point. Maybe Sean’s Punk Rock Jesus really is just a damned good scifi yarn. Maybe it is just a lavishly rich pre-future scifi story. Maybe it does just assume the position of “great” scifi in that it tells the story of individuals. Maybe.

Or maybe, Punk Rock Jesus is something more entirely. Maybe it’s retelling exactly the same story Sherlock (the recent BBC version starring Benedict Cumberbatch) is. Maybe its a severe and savage reminder of a half-formed thought by James Joyce, all these decades ago now–that, “History is a nightmare, from which I’m trying to awake”.

Later in the issue, we encounter perhaps the only caricatures in Don Baker’s guests, atheist Dr. Clark, and theist Father Sterling. When as fine a writer as Sean offers up caricatures, this is certainly a clue. True to what we expect of a hardline atheist stance, Dr. Clark suggests that perhaps there wasn’t even a Jesus. Not verifiable historical evidence can be found after all.

And it’s this idea, however ghastly to those of faith, that really is the hook for the entire debacle chronicle in Punk Rock Jesus. The idea that perhaps Slate, Epstein, McKael and the rest are simply reenacting cultural precepts. We certainly see Slate playing to the crowd in exactly this way when he modifies the J2 child’s eyes to blue. The real question for Punk Rock Jesus is not whether or not we’re doomed to repeat history, knowing it or not. But whether there is anything we are capable of, other than reenactment. Are we in fact ourselves? Can we be? Or are we simply reiterations of pre-imagined tropes? A zombie economy of cultural presuppositions?

Punk Rock Jesus is the best kind of scifi–a meditation on liberty for the cyber-age. And it would take a Masters thesis to fully unpack the ways in which we already come as prepackaged. Fortunately to this end, Nick Harkaway has already written The Blind Giant.