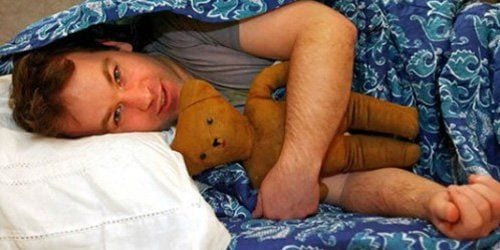 With its can-you-believe-this? story, slacker protagonists, and rueful gravitas, Sleepwalk With Me could easily have been This American Life: The Movie. That it’s not, even though writer, star, and co-director Mike Birbiglia is a longtime favored TAL performer, is a testament to his multifaceted appeal. The movie doesn’t quite translate that appeal, just as it doesn’t translate the original bit’s conversational stage format to a narrative.

Based on his one-man show, Birbiglia’s film is a not-even-veiled account of his struggles as a standup comic who’s also battling fears of commitment and the possibly life-threatening sleepwalking that seems to get worse as his career gets better. Changing his character’s last name to Pandamiglio (a nod to the many mangled mispronunciations his real name receives from emcees) and little else, Birbiglia does a solid job of translating the downbeat, confessional humor of his show to the screen.

After Birbiglia introduces himself, speaking directly to the camera, the film segues into what seems an Apatowian man-boy narrative, focused on the schlubby sarcastic guy in jeans and a saggy hoodie who appears to live on pizza and chicken fingers and can’t commit to his demonstrably fantastic girlfriend Abby (Lauren Ambrose). Thankfully, these familiar elements are bolstered by an unexpectedly roundabout story structure and a solid cast of secondary players, particularly Carol Kane as Birbiglia’s dotty mother, James Rebhorn as his pissed-off dad, and some comic legends like David Wain and Marc Maron in smaller parts.

In addition to performing with these actor-actors, Birbiglia, a comic with little previous straight acting experience, delivers a series of monologues that form the spine of the film. He remembers how he found out that his sleep disorder was so severe that some other sufferers committed murder while asleep, and also that instead of going to the doctor, he chose dinner instead, a story he tells while gnashing through a plastic-wrapped slice of pound cake.

While his deadpan delivery is entertaining, the movie does fall into some problems emerging from translating such a personal story to the screen. No matter how skillful the filmmaker, dream sequences are still dream sequences. So when Sleepwalking with Me gets to the climatic story of Birbiglia’s most life-threatening sleepwalking episode (involving a window and a whole lot of blood), instead of just reenacting the scene, he makes the mistake of shooting a simulacrum of the dream he was having while sleepwalking. It plays like a cheap skit, one of a few notably false notes in the film.

The movie does better when it focuses on something like a real life, in montages of Birbiglia driving bleary-eyed from one miserably paying and soul-crushing gig to the next as he hones his craft, starts to bond with other comics, and ever so slowly starts to chisel out some kind of an act. These should by all rights be the hokiest things in the film, but they’re not. Instead, they cement his persona as a diligent student of the craft and also give one of the best screen representations yet of the grinding stagelit public humiliation that is part and parcel of learning the craft of comedy. Birbiglia sets up one scene where the camera is just behind and to the side of his head, so we might see his sweat and also look out on the great blank black of the crowd in the seats past the hot lights, waiting to be entertained. It’s one of the most visceral scenes ever shot — you can’t imagine how Pandamiglio doesn’t simply melt in fear — but also quite informative. Unlike most films about man-boys, this one shows him gaining success, not just by finding an acquiescent girlfriend willing to put up with his crap, but also by planting his feet on a small stage and facing down his terror.

Sleepwalk With Me is a comedy about facing fears, whether on stage or in life. In this scenario, Pandamiglio can be overwhelming, sometimes courageous and also a ball of nervous indecision. For all the first-film jitters and inherent problems of turning an all-monologue show into a narrative structure, Sleepwalk with Me is a canny and heartwarming comedy that rarely sells the audience short.