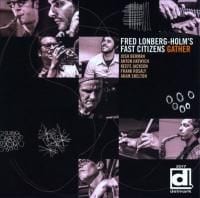 The one time I caught Fred Lonberg-Holm performing with the Vandermark 5 and during the very brief conversation I had with him afterwards at the merch table, he carried himself like a man who was contentedly at the mercy of his career. He had a cello style to match, too. If you want to stand out in Chicago’s underground jazz scene, that’s exactly what you have to do; stand out. Lonberg-Holm is unafraid of where his cello and effects arsenal will take him, no matter how unorthodox. The windy city underground collective Fast Citizens, of which Lonberg-Holm is a member, is notable for letting each member have a shot at the “leader” position. First it was tenor saxophonist Keefe Jackson’s turn, then alto saxman Aram Shelton’s. Gather finds the reins being handed to the cellist, writing a series of songs that let Shelton, Jackson, cornetist Josh Berman, bassist Anton Hatwich and drummer Frank Rosaly ride an irresistible groove (“Later News”), explore ballads with harmonic indigestion (“It’s A Tough Grid”), and generally screw around with tonality (“Lazy Days”). Throw in some free-jazz spaz outs and you have one punishingly great work. Just don’t expect to change people’s minds with it.