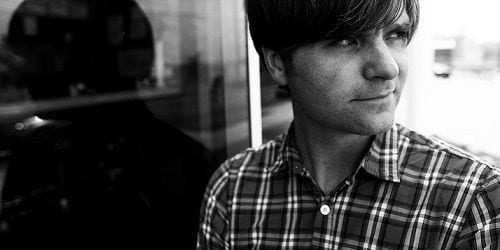 The popular website Flavorwire once published a list of stereotypes of people based on their favorite band. The best they could come up with for Death Cab for Cutie was that the band is adored by “girls who quote lyrics as their Facebook status”. In other words, fans of good songwriting like Death Cab? That’s about right.

And now those girls have more lyrics to quote on their Facebook pages, for indie-rock superstar and Death Cab frontman Benjamin Gibbard — after numerous side-projects (like The Postal Service) and monikers (All-Time Quarterback) — just recently put out his first solo full-length, Former Lives on his long-time label home Barsuk.

On this new record, Gibbard’s songwriting traverse many modes. The album opens with “Shepherd’s Bush Lullaby”, a catchy a cappella tune recorded on an iPhone and featuring Gibbard singing “under my umbrella I sing a cappella“. The record ends with a similarly lo-fi recording (this time done in GarageBand, not on an iPhone), “I’m Building a Fire”. Songs like “I’m Building a Fire” bear the stamp of a songwriter who has penned such iconic singalongs like “I Will Follow You Into the Dark”, every note carefully placed, every line carefully considered. “In the morning you’ll wake with the ashes of a memory / And the sun on your face and I will not seem so far away”, Gibbard intones, unfettered by other instrumentation or tricks of production.

The variety of material on Former Lives should put to rest the stereotypes that Gibbard is a one-note songwriter, with that one-note being overt sentimentality. (Those who heard his farewell to Seattle’s baseball star Ichiro Suzuki knew this before the rest of Gibbard’s cynics did.) On this new record, Gibbard proves he has the songwriting chops and delivery to turn it out on his own (with some help from Aimee Mann on album standout “Bigger Than Love”). While Gibbard has assured listeners that Death Cab is alive and well, he has been too modest to say the same of his solo career, and recently sat down with PopMatters to tell us all about it …

The songs were written over a long period of time. Do you still feel like there’s a theme that comes together?

Most of the songs are more recent than very old, and the oldest song is eight years old, but that shouldn’t give anyone the impression that these are “old” songs. Even the oldest song, “Broken Yolk in Western Sky”, I wrote around the time of Plans. When you’re recording a song, you’re editing and rewriting, [and] you’re thinking about how you want to present a song in relation to what your aesthetic and goals are in present time, not exactly when you wrote it. I didn’t feel like I was mining old songs. All of these songs, I’ve been fond of since I wrote them.

One of my favorite tracks on the new record is “Bigger Than Love”. I was wondering if you could talk about that song and what it means to you.

I’m a huge F. Scott Fitzgerald fan, and I also love [his wife] Zelda’s writing a lot as well. There’s a book that’s a collection of their letters called Dear Scott, Dear Zelda. I just really liked the tone in which they wrote to each other back and forth throughout their lives — starting in the courtship all flowery and all yearning. And ending later in their lives when Zelda was in an institution in Asheville and F. Scott was in Hollywood, writing scripts, punching up scripts for studios, which just seems like an egregious waste of talent when it comes to one of the greatest writers of the 20th century. I found myself attracted to that book and wanted to try a lot together into the song. In doing that, I needed somebody to sing the Zelda parts of the song, and I’d been friends with Aimee [Mann] for a long time, and she wanted to do it. She came down, and we had a lot of fun with it. That song turned out to be one of my favorites on the record as well.

Since this was your first official solo full-length release, did you feel either more or less free or was it the same for you?

I welcome the pressure that comes with making a Death Cab for Cutie record or, conversely, for not making a Postal Service record. There’s an anticipation for every record that, certainly, Death Cab makes that’s been built into a band that’s been putting out records as long as we have. Thankfully, [we have] a fan base that’s very passionate. We all very much appreciate that passion, that people care so much. In that sense, it was nice to make a record that I didn’t know would be a record, away from a record label, any sense of anticipation or pre-hype.

It seems that when a band is promoting a record these days, it starts in the studio: “Here’s the progress report! What are they working on? What does the record sound like?” And then the record’s done, and it’s like “What do the singles sound like? What is the tracklisting?” I recognize this all because people care; it’s not that I think it’s stupid or anything like that. It’s just part of the deal. But it was nice to be able to be doing a project that nobody knew I was doing. I wasn’t going around telling everybody who put a mic in my face. I just kept it quiet because I don’t know if I’m doing a solo record. I’m doing some recordings, and I like the way they’re turning out, but I don’t know if it’s going to be a record or just me recording some tunes I’ve always wanted to record. Maybe it would fall on its face. Maybe I’d only record four or five and not have time to finish it. That, for me was the best part, making it totally in a vacuum. Even when bands make records and we tell ourselves we’re staying totally in our heads about it, but there comes a time you have to start thinking about somebody else and whether or not they’re going to appreciate the work.

Do you pay attention to the press that comes out about you and your work?

I spend very little to no time. Actually, no, I spend no time checking up on my status outside of myself. I spend no time fishing around for compliments on the internet or getting upset when I hear somebody say something mean about me. The nice things don’t make you feel that good, and they don’t make you feel so good that you can forget the bad things. You can get 99 people telling you that you’re the greatest thing since sliced bread, and one person can say sliced bread is better than you. Then you fixate on the one who’s a naysayer. I’m in a position where people feel very passionately about our band. They feel very passionately on the pro side and very passionately on the con side. We tend to see the pro side because they’re the ones coming to our shows and buying things. I’ve learned years ago that it’s not worth chasing down that stuff about yourself. You have to ask yourself the questions of whether it feeds you creatively. Because if it doesn’t feed you creatively, there’s no point in hunting it out. It can’t mean anything. It shouldn’t be taken to mean anything.

I saw that you recorded “Shepherd’s Bush Lullaby” on your iPhone. How did that come about?

It was a silly idea. I’m not overflowing with songs. I tend to be more calculated in my songwriting. Every now and then, something completely silly comes into your head, something catchy, and you decide to record it on your iPhone when you’re walking around Shepherd’s Bush in London. It’s a lo-fi sounding little song bit. I wanted it to open the record because I didn’t want something that was a statement to open the record. I wanted something that was a little more playful. I’d been fond of this song for a while now. [I thought], “I’ve been fond of this song for a while now. I’m going to put it out. Fuck it.” It’s a side of my songwriting that doesn’t see the light very often, some may say with good reason. I felt like if there was ever a place for it, then this record is that place.

I find it very charming.

That’s it! It’s meant to be charming.

I thought it was nice that the record was bookended by the iPhone song and the final track, “I’m Building a Fire”, which was done in GarageBand.

Yeah, I think it’s nice that the record was bookended by lo-fi recordings. I think there are some very lush moments in the record that are very well-recorded and well-produced in a lot of ways. But both songs [the first and the last] are palate-cleansers in their own ways. “I’m Building a Fire” was recorded by myself in a cabin alone in Big Sur. There’s something I’ve always enjoyed about that recording. When you spend that time by yourself, your own voice becomes a source of comfort, however sad that may sound. So there’s a particularly quality to that song I’ve always liked. It was recorded live into a computer. There wasn’t a lot of thought put into producing it.