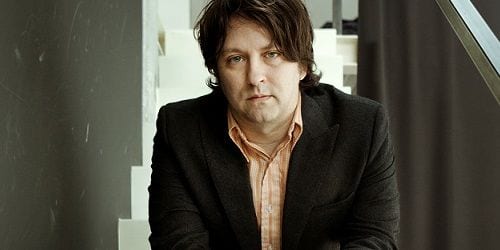 Recording under the name Six Organs of Admittance, Ben Chasny has made some of the most vital and hallucinatory music of the last decade and a half.

He began releasing records in the late 90s, often home recordings issued in minuscule editions. Since then, he has become a fixture in the avant-garde rock and folk music, from playing with David Tibet of Current 93 to becoming a regular member of the psychedelic juggernauts Comets on Fire. Recently he formed Rangda with Richard Bishop of Sun City Girls and the improvisational mastermind Chris Corsano, the trio getting its name from the demon queen of Balinese mythology.

Chasny’s last few solo records have been relatively sedate affairs, focusing on long-form drones and acoustic ballads. Ascent, released this August, represents another change in direction for Six Organs of Admittance. Teaming up with his band mates from Comets on Fire, Chasny recorded one his most direct and powerful albums to date. In contrast to complex and often fiery guitar playing, Chasny is unassuming and perhaps bit reticent in conversation. We spoke about his new album, his collaborative projects, and the hazards of revealing too much about the music.

Was getting together with your old band-mates from Comets on Fire something that you had on your mind for awhile, or was it fortuitous circumstances that brought all you guys to record together?

A little of both. I realized that I wanted to have a group sound for the next record. We all started talking about it last summer, trying to figure out if there would be a time and it turned out that everyone was free in January, so I wrote some more songs. Ethan [Miller] was done with his Howling Rain record, Noel [von Harmonson] wasn’t touring with Sic Alps and the other guys got some time off of work, and so it kind of worked really well.

About ten years ago, before I joined Comets, they were the Six Organs backing band in San Francisco. We liked to play shows together but we were always playing really loud bars and it was impossible to play acoustic guitar, so I said, let’s just turn Six Organs into a loud band so people could hear the songs. That’s what we were doing ten years ago. When I joined Comets we dropped that project and I went back to playing acoustic guitar. It’s not really that different from me cause we were picking up on something that we did a long time ago. Like, we were supposed to do this record ten years ago and things fell apart, so part of the idea with this record was to do this record that we never finish, so that’s how it came about.

On Ascent, you played some songs like “Close to the Sky” and “A Thousand Birds” that you recorded ten years ago. What was it like playing those songs again? Was there anything about them that came to you in retrospect, things that you didn’t notice when you were first playing them?

Not really. We ended up doing the songs the same way we did ten years ago. We worked a lot on the structure years ago, so we just remembered that. The original idea was to take songs that were just acoustic, from the Holy Mountain records and give them a little bit more of a swing. You know, with bass and drums. The idea was to give the them not a total swing rhythm but a little more groove, in order to extend out the guitar solos, not necessarily have white noise, the guitar solos were a lot more noisy ten years ago, so this time we reigned in the solos. That was the idea behind revisiting those songs.

Yeah, I do hear that swings on in the drums really does give some of the songs a vintage psych feel. Were there any particular artists that influenced that particular approach?

The main idea for the bass, drums, and guitar, the record that really influenced us, was a record by Jutok Kaneko, who was in this band Kousokuya. He died a couple of years ago but he released a really amazing record on the label PSF. We were taking from really kind of more obscure references. Another band we were listening to was Les Rallizes Dénudés. We were taking an idea of theirs, which is to take one riff or one bass-line or one drum rhythm and then doing extended solos over that. At the time there wasn’t this huge surge in popularity that these bands have now. You couldn’t find Rallizes’ records in stores on vinyl; the bootlegs on vinyl were just starting to come out. Anyway, that was the influence for having the swing rhythms over noise guitar solos.

Those Japanese hard-psych records have survived through word of mouth of 40 odd years. Before the internet you had a really dedicated group of people working to keep that music alive. Why do you think it has survived for so long?

Well, really, because it’s just good music. I have a kind of perenialist attitude when it comes to those things. But when I was young there was still a really strong network of people who were into that kind of thing. I grew up in Northern California and I would go down to the Bay Area and see a lot of shows there. There was an internet when I was growing up, but the music network was really through catalogs. I also read about a lot of things through Forced Exposure, they were always really on the spot about what the good records were.

I was listening to their records way before I ever met them, ordering their records from catalogs. Of course, Torch of the Mystics was the first one, and then, going from there, ordering their records on Majora, when they were coming out. It was eight about years later I ended up playing a couple of shows with them. I had never met them before. They didn’t play very often. But they were on tour and I was on tour as well and we met in Boston. A couple of years later we ended up doing a few shows on the West Coast and that’s when I really met those guys. That was the tour where I really met them.

I’m interested in the group dynamic you have with Rangda. You have two other really strong players that can both play improvised music or play more composed pieces. How do you approach working with them and how is that different, say, from playing in Six Organs of Admittance?

The new Rangda record [Formerly Extinct] is really composed. The time signatures change from 9/4 to 12/4. We trade riffs back and forth. It’s not that proggy. You know, in prog music they’re always changing time signatures, but with the Rangda record it’s a lot smoother. It was definitely lot more difficult to play than the last record [2010’s False Flag], so it took a little bit more precision. With Six Organs, when I’m playing with the Comets guys, we have been playing for just so many years, everything just clicks in. With Rangda, everything clicks in but it’s a process of always listening to each other all the time. It’s way more of a conscious process. With the Comets guys its way more of a subconscious process. Listening back to the new record there’s all this interplay with Ethan that I wasn’t even aware of. I heard these guitars going back and forth. At time I didn’t even notice what we were doing.

I read that Ascent has a bit of science fiction theme, at least in the artwork and imagery. Could you elaborate on that?

Well, a lot my early records are center around ideas or general imagery or a certain memory. And then I realized that I’ve never really written a record based around a story so I came up with a loose idea for different narratives I could write songs about. There is definitely a kind of narrative to it, but I don’t want to give it away. I didn’t what to make was going on too apparent, that would have turned it into a rock-opera [laughs]. I didn’t want to the lyrics to refer to anything specifically identifiable like a plot or story.

On the other hand, there are some spiritual undercurrents in you music as well, am I right? You reference Sufi poetry, for example. And the name Six Organs of Admittance is a term from Buddhist philosophy. Do you have some kind of religious or spiritual belief system?

Yeah, but it’s really difficult to describe. Honestly I think those things are private, that they’re nobody’s business but my own.

No, I don’t mean you. [laughs] What I mean is that I don’t want to be preachy. I just have no interest in forcing my beliefs on others. Everyone has their own kind of orientation and I don’t want to impose on what’s going on there. The older I get the more I realize I need to keep my mouth shut. I realize that I don’t know anything. When I was younger I used to go off on this or that. So if I talk about a spiritual orientation I am really conscious of the need to really be careful about what I say. That isn’t to say that this is not important, it’s just that it’s a private thing

Yeah, New Age is definitely a problem. You know that Rumi is the number two best selling poet in America? But it’s through these awful translations that really distort what the message is. New Age is really part of our binge-and-purge culture, where someone can work their Bank of America job but that’s okay because, you know, they read Rumi.

But even if those sources are mistranslated or misappropriated there is still something of the original message inside those works?

Sure, there is definitely still something in, say, Rumi, but people don’t work to get there. A lot of the ideas that are part of New Age are originally very difficult. You have to stretch yourself; you work really hard to put them into practice. But people don’t want to do that.

Sure. You have to take chances. On that subject, it seems like you work consciously to make each album different. Is that right?

Yeah, to a certain degree. I definitely don’t want to be making the same album over and over again, but at the same time I don’t want to want make a complete break. The music of Six Organs is ingrained in what I do. If I want to do something completely different, I’ll just start a new project.