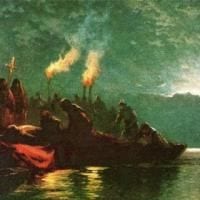 Right Away, Great Captain!
The Church of the Good Thief
Favorite Gentleman

The Church of the Good Thief completes Andy Hull’s solo trilogy that began with 2007’s The Bitter End and continued through 2008’s Eventually Home. Fans of his band Manchester Orchestra hearing his solo work for the first time are probably in for a shock. In marked contrast to Manchester Orchestra’s energy and aggression, The Church of the Good Thief is hushed and quiet almost to the point that you find yourself leaning into the speakers to better hear the songs. The story of a sailor’s final days after he has found his wife and brother in each other’s arms, Thief is a dark album full of introspection and small epiphanies on the part of the narrator. If there’s any complaint to be made about Thief, it’s probably that it discards some of the previous installments’ variety. Apart from a couple of songs where the guitars or vocals rise above the fray, the differences from song to song are very subtle. Hull’s lyrics on this album are impressive, and his story is compelling. There’s the danger, though, that it stands best only if you’ve heard its predecessors, and have a better sense of the journey that’s brought Hull’s sailor to this dark, quiet place.