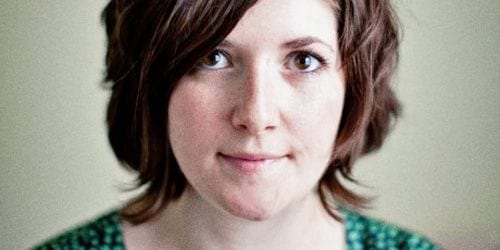 Though only 28 years old, the fiction writer Claire Vaye Watkins is already establishing a formidable reputation for herself in the lirerary world. She finished her Master’s of Fine Arts from Ohio State, and published her debut collection Battleborn earlier this year via Riverhead Books.

These stories, mostly set in her home state of Nevada but written during her MFA years at Ohio State, include a broad range of tones and themes, illuminating love, loss, heartache, and violence in uncannily precise language. The first story, “Ghosts and Cowboys”, is an autobiographical story inspired by Waktins’s father’s life in the Manson Family. Other stories visit brothels, young couples expecting their first child, and a woman left pregnant and devastated by her recent breakup.

The tales she spins resonate with many different kinds of readers and members of the press. The notoriously finicky A.V. Club awared it a grade of A-, saying that Watkins “reveals a powerful new voice that deserves recognition”. In The New York Times Sunday Book Review, Antonya Nelson writes that “Watkins sets the terms for the reader’s experience of the book, establishing the recurrent concerns of the collection: storytelling and myth-busting, knowing the past and surviving the present”.

Watkins is indeed anchored in a deeply personal past but also the past of a place. As her future blooms and her scenery changes, it will be interesting to see what she brings us next.

Are the stories in Battleborn pretty much the same ones as in your MFA thesis?

Yes. All of it except for “The Digging”.

How did they evolve as you worked on them with your advisor?

I started working on the book right when I got to Ohio State and started my MFA, so they are only part of the progress I made. The stuff in the book doesn’t represent a lot of the garbage I threw away. That’s a really important part of the process. The book itself, my teachers really helped me [because] they could articulate the ambition of my work better than I could and probably still can, so it could kind of bounce back to me, the stuff my work was up to, on an aesthetic and thematic level. I could play that up or play it down and then react against it.

It had me have a conscientious objective to have a book that was aesthetically diverse and had some interesting thematic stuff to say. A lot of collections seem really, really great story-by-story, but get a little claustrophobic when you read them together. I really, really didn’t want to write a book like that. I think in addition to all the stuff in terms of craft and just becoming a better writer really really quickly at Ohio State, all the macro-level stuff, it helped me write a book that had a bigger range than it otherwise would have had.

I noticed that the forms and the points-of view span such a gamut, in contrast to a lot writers, who get stuck in one form or voice early on.

It’s also nourishing for your artistic self — for me at least–to be challenged. Intellectually, I wanted to write a book with a lot of range. But on just a day-to-day level, I would get really bored writing a story that was just like the story I’d just written.

I always set out with a couple of formal restrictions in mind as well as some restrictions on subject matter, as far as setting: “Where in Nevada would this story be set?”

Do you consider yourself a “putter-inner” or a “taker-outer?” [Note: This refers to a distinction drawn between two different types of writers first drawn by Samuel Beckett and later re-popularized by Stephen King in his book, On Writing.]

Probably a putter-inner because I write really, really slow first drafts. It’s also difficult for me to leave it ugly or messy. I’m not good at writing shitty first drafts. I write shitty third drafts is basically what ends up happening. So I have a relatively tightly controlled outline process and am using a lot of research. So I have to remind myself to loosen up and let some unexpected stuff happen.

I always remind students [how] in “A Good Man is Hard to Find”, that Flannery O’Connor story, the family stops for barbeque at Red Sammy’s, and there’s a monkey in a chinaberry tree there. Every time I read that story, I forget that the monkey in the chinaberry tree is there. My students ask, “What does this mean?” And I say, “You know, sometimes there’s just a monkey in a chinaberry tree”. So I kind of use that to remind myself to let unexpected stuff that may not be part of a plan for a story but that makes the story that much better happen.

Yes, you said a minute ago that you worked from an outline, and my first thought was characters tend to have their own ideas and tend to get away from me, in my own writing. I was wondering if the characters rebelled so much or if they conformed to the outline.

I have to say that I have also heard about characters coming alive and doing their own things. That doesn’t happen a lot for me. Maybe I just am not there yet in my own writing. Because I work from an outline, I have learned to have a little bit of play from the outline. Then I’ll just go off and read for a while, and I’ll go back to the outline, and I’ll say, “Now knowing about this monkey in a chinaberry tree, let me review my next step”. So it’s a back and forth between chaos and control.

Was it hard for you to pick out what order the stories would go in?

It was hard. It was a really fun process sorting the stories, but it really was difficult maybe because of stuff that only I could see because I’ve spent so much time with the stories.

There are a few different modes of the stories. There are some that are plot-driven, some that are internal and meditative, some of the voices, the characters are echoes of each other, so I didn’t want them to be too close to each other in the book.

Thematically, some of the stories are in conversation with each other and I wanted to make that apparent but not obvious and hamfisted. I laid them all out on the floor of my apartment, and I labeled them with these colored Post-Its according to [what kind of story they were] and made sure that no matching Post-Its were near next to each other but that they were near each other. Then, after that overly elaborate process, when I defended it, my boyfriend’s also a writer, and he read my stories and gave me some feedback.

One of the notes he gave me was, “I wondered why you put your best story at the end instead of the beginning”. I was, like, “Oh, yeah, I forgot about that. The first rule of ordering a collection”. That was the final change of the finished product, the order.

When I write fiction, there are a few short stories that I’ve read and loved that kind of become templates. Aside from the O’Connor story, are there any stories that you find yourself going back to over and over?

Yeah, definitely. In fact, each of the stories, in the outline, I think, has its touchstone story or couple of stories. With each story I wrote, I had a book open on my desk to a story and, if only in my head, I [thought], “I want to write after this”.

So, for example, “El Ronde El Nido” starts with the girl confessing to her lover the bad things she’s done in bed. That story was written after [a] Christopher Coake story called “We Are In Trouble” from a collection of the same title. His story starts out the same, with these two lovers in uncharted territory, with these two lovers confessing their misdeeds to each other.

Another thing about “El Ronde El Nido” is it’s in conversation with Mary Gaitskill’s “The Girl in the Flames”. “Wish You Were Here” owes a lot to Joan Didion, especially Play It As It Lays. Joy Williams.

Me too. She’s amazing. She’s really, really amazing. I didn’t read her until I was halfway through the collection. The stories I wrote post-Joy Williams are so much better than the others because she cracked my world open.

Her prose is so tight.

One of the reasons I was so interested in reading your book was that I heard about “The Archivist”/ So I read it and I thought, “This is the breakup story that I’ve been trying to write!” It wasn’t until I read your story was that my problem with my own story was that a good breakup story has to start off as a love story.

No, you’re right. I hadn’t explicitly thought about that, but I think you’re totally onto something. I tell my students all the time, “If you want us to care about losing love, we have to care about having had it in the first place.” For me, that was probably an easier part of writing “The Archivist,” actually, because I was, myself, heartbroken. I was in that stage of heartbreak where the person who hurt you is also somehow the most perfect in the world. So it’s easy for me to depict everything that’s great in that relationship, but the more difficult part was getting real about the ways in which, for that character, it’s a really narcissistic endeavor, very self-destructive, all those other facets to the character.

It’s funny because sometimes people will describe that story to me, and they’ll go, “I hate Ezra. He’s the worst, or “I have a hard time believing she was ever in love with him.” And I’m like, “Yes, yes, I’m very happy that you are so healthy you have only ever loved people who are good for you, but sometimes other people have other experiences.

What music were you listening to while writing these stories?

I wrote them over several years, so I went through some phases. I went through a big Mountain Goats phase, and some of these stories have these very austere, violent plots, and I think the music of the Mountain Goats helped me tap into that. Then I listened to Yo La Tengo a lot. There’s this song called “Everyday”. I’ll put that on and it’s this Pavlovian instinct for me to chill out and sit at the desk and spend some time there.