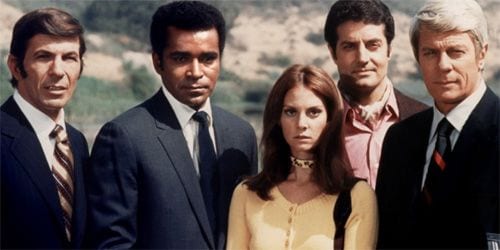 It starts with Jim Phelps wandering through some deserted site: an abandoned warehouse or empty airplane hangar or deserted drive-in. Somehow he knows which drawer to open, which folder to check, which coat pocket to rifle through. In moments he is holding a manila envelope and a tape recorder. A surreptitious glance to ensure that he is alone—he is, of course, except for us, and he can’t see us. Then he removes the contents of the envelope and flips the switch on the tape player.

What a great show Mission: Impossible was, and what an odd one. A quirky mix of impressive high-tech and laughable naivete, of ’60s cool and Cold War rhetoric, of international scope and xenophobic alarm. It had something for everybody. It felt cool. It felt smart. It made it seem okay to be patriotic, and at the height of the Vietnam War, that was no easy thing for some of us.

Besides, it just looked so damn slick, and it still does. Camera angles are dynamic, with plenty of bird’s-eye-view shots and handheld point-of-view moments. When Barney is crawling through a tunnel or Paris is trapped inside a box, the viewer is right there with him. Then there are the sets, lavishly decorated and shot in fully saturated color. The prints for this newly-released collection look pristine, and the sound is fine, too.

Perhaps the most striking thing about this show is that for any given episode, the audience is left in the dark as to what the protagonists are doing, and why. This must be the only show in the history of television in which the audience had no idea what hell was going on for most of the time. The only comparable show that comes to mind is the BBC’s opaque sci-fi drama The Prisoner (which is, to be fair, far more bewildering than this). Considering the conventional wisdom that says that audiences don’t like to be confused, the ongoing success of Mission: Impossible is a remarkable thing.

Apparently, audiences didn’t much mind being left in the dark, as long as everything was comfortably revealed at the end: Mission: Impossible ran for an impressive seven seasons, from 1966 to 1973, and even came back for an encore in 1988 and 1989. That’s a long lifespan for a TV show, especially for one as convoluted and (relatively) highbrow as this.

The man in the picture is…

The mission is everything, and those missions are absurdly complex, which is of course the point and the source of fun. They hinge upon elaborate Rube Goldberg setups that generally involve masquerades, high-tech gadgets, unlikkely coincidences and ridiculous predictions about human behavior. Of course, the more ridiculous in intent, the more entertaining such plans were to watch—even if their true intent was only understood in hindsight. Things rarely go wrong, and even when they do, that’s usually part of the plan, as well.

One significant difference from most contemporary dramas is that the scope of the episodes never extends beyond the mission at hand. There is no delving, a la The Wire, into the intimate lives of these characters. We never follow Jim Phelps home after a successful mission; we have no idea what he likes to drink, or whether he drinks at all. Martin Landau and Barbara Bain play Rollin Hand and Cinnamon Carter for the first three seasons, and their fine work does much to elevate the program during those years, but we never see more than a few hints of flirtation flitting between them. Imagine how such a will-they-or-won’t-they storyline would be treated today; in some ways, their story arc might become the defining one of the season. As it happens, though, these episodes end with the resolution of the impossible mission at hand. Roll credits.

That said, though, Mission: Impossible was audacious in its use of multi-episode storylines. The show certainly didn’t pioneer the format, but it took full advantage of two- or even three-episode stories to milk the nail-biting “to be continued next week” cliffhanger. Whether it’s Leonard Nimoy dangling by his fingertips from a windowsill or Peter Graves about to be discovered hiding in a gangster’s stronghold, the show wasn’t shy about utilizing such overt manipulation to keep the audience coming back the next week. Nearly every season contains at least one such scene.

Inevitably, certain tropes recur throughout the series. The Impossible Missions Force is more adept at subterfuge than direct action; their skills lie in mimicry and misdirection rather than, say, sharpshooting and explosives. Yet it’s a surprisingly nonviolent show. Episode after episode sees one or more members playing dress-up to confuse and mislead some petty dictator, greedy indusltrialist or overreaching military man. Landau and, later, Leonard Nimoy (fresh from his three-year mission as Star Trek’s Spock) would be the go-to figures for this, but everyone got involved at times. Even the reticent Barney would pose as a boxer in the two-parter “The Contender” (and would take a few shots for his trouble). The woman were called upon as well, though sadly, much of their undercover worked consisted as posing as leggy ingenues working to distract their victims.

The other recurring trope is the gadgetry, the little bits of mechanical trickery that will, say, cause a guilty man to hear (and see!) his murdered son’s ghost howling in the night; or allow the IMF team to intercept and respond to phone calls; or convince a traitor that the TV was broadcasting in the aftermath of a Communist invasion. In the landscape of the ’60s and ’70s, these technological gadgets were just familiar enough to seem plausible—the DVD player was only 15 years away—but still novel enough to feel exotic and exciting. The show did a fine job of straddling the unfamiliar and the commonplace, with results that must have seemed, to the audiences of the time, almost magical.

Your mission, should you decide to accept it…

That magic had faded somewhat by the time of the 1988-89 reboot, which is included in the newly-released DVD set of Mission: Impossible: The Complete Television Collection. This set is a monster: 56 discs, over 170 hours of programming, plus a smattering of bonus features. Those features include interviews with cast members, a number of behind-the-scenes features, and a couple of 1960s TV interview clips. Personally, I would include the ’80s reboot as a bonus feature as well, since it has relatively little bearing on how most fans will remember the original series.

This isn’t to say that the new edition of the show is horribly bad; it’s just that the times had caught up with, and overtaken, the premise of the series. Suddenly the low-high-tech gadgetry appear silly rather than cool, and the plot holes, which had always been there, feel less forgivable. In one of these episodes, a woman commits murder by placing an unconscious man beneath the jets of a space shuttle that’s about to test its engines. The man is duly ignited, but no one notices the woman dragging the body into place notwithstanding the banks of cameras focused on the shuttle. Such an oversight seems charmingly quaint in the original series, but induces eye rolling later on.

That said, some younger fans to the show might actually prefer this iteration to the earlier one. The production values are high, some of the gadgets of nifty, and the cast—which includes Peter Graves reprising his role as Phelps—does its best with what it’s given.

As always, should you or any of your IM Force be captured or killed, the secretary will disavow any knowledge of you actions…

With such a plethora of material, it seems futile to point out the excellence of this or that particular episode. Nevertheless, each viewer will have favorites. For me, “The Seal” gets points for Landau’s strong performance and the plot’s clever use of a trained cat (what can I say, I’m a sucker for trained cats), while “The Submarine”and “Invasion” both incorporate ludicrously complex subterfuges to trick their victims into revealing vital information. Barbara Bain was justly awarded three consecutive Emmy Awards for her work in the show from 1966 to 1968, and her season 3 turn in “The Exchange” might be her stongest performance. That episode forgoes the usual structure and picks up the mission halfway through in order to focus on Bain’s character, Cinnamon Carter, as she is captured and tortured for information. It was strong stuff in 1968, and it remains effective even today.

The cast was always the strong suit for the series; when Landau and Bain left in season 4, they were replaced with Nimoy and a revolving door of female leads, including occasional visits from Lee Meriwether (the original Catwoman from Batman) and multiple seasons with Leslie Ann Warren and Linda Day George. Guest stars were many, including Carroll O’Connor (who would later star in All in the Family), Robert Conrad (of The Wild Wild West and Baa Baa Black Sheep), Cicely Tyson, Fritz Weaver, Larry Linville (M*A*S*H) and the boxer Sugar Ray Robinson. It would be an overstatement to call the show’s guest roster a “who’s who of TV personalities,” but one undeniable pleasure of the show is in picking out the names and faces that made that era of television so (intermittently) great.

So—should you buy the set? It’s massive, and beautifully produced, and the packaging is clever, with each season’s discs packed in a separate tin, all of them stacking to fit into a dynamite-shaped container complete with fuse. According to the set’s promotional material, the 56 discs weigh in at a whopping 10,314 minutes, which is… let me get my calculator here… just a hair under 172 hours of entertainment. That’s equal to roughly 85 feature films. Looked at that way, the set’s hefty price tag isn’t so bad (and you can find it deeply discounted online anyway).

As a window into the Cold War-era pop-culture past, Mission: Impossible is as entertaining as anything you’re likely to find. If you can manage to suspend your disbelief—and yes, there is a quite a lot of disbelief to suspend—it’s a worthy entry into the pantheon of espionage thrillers.