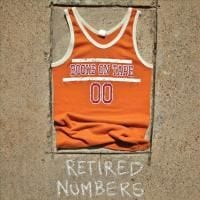 Todd Drootin nearly let Books on Tape fade away forever before discovering some lost unreleased tracks from when he first decided to call it quits. He chose to bring the project back for one song, “Super Dr.”, after breaking his collarbone in a cycling accident. After putting that song online and receiving a bigger response than anticipated, he found a DVD with five other songs that had been left unreleased. These six songs make up Retired Numbers.

Retired Numbers is an instrumental record full of constantly twisting patterns, tempos, and rhythms. It has a fragmented collage style not too dissimilar from that of Death Grips, only of a much less aggressive and confrontational nature. While these songs aren’t exactly melancholic, they’re not fierce either. They occupy a middle ground full of intrigue but unfortunately are too scattered in nature for the listener to make a strong connection.