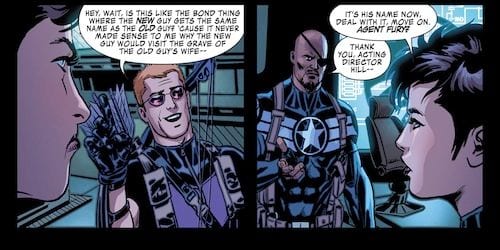 Nick Spencer’s Marvel NOW! relaunch of Secret Avengers is somewhat of an anomaly. It’s a renumbering of an only modest-selling series, it wasn’t as hyped up or heavily advertised as some of the other new #1’s over the past six months (Uncanny Avengers, All-New X-Men, Superior Spider-Man, etc.), and none of the protagonists have superpowers of any kind. Fortunately, those characters happen to be some of the main players in last summer’s box office success, The Avengers, in new roles here that feel tailor-made for fans of the Marvel Cinematic Universe, along with a surprisingly fresh premise that has a lot of potential going forward.

There are a number of Avengers titles one could be reading right now–Rick Remender’s mutant-centric Uncanny Avengers, Jonathan Hickman’s cosmic Avengers and New Avengers, Kieron Gillen’s furiously apathetic Young Avengers, or even Dennis Hopeless’ survivalist Avengers Arena–yet Secret Avengers sets itself apart from the rest of the sister series by staying true to it’s title and taking place in the shadows of the Marvel universe. My main complaint about the first volume of Secret Avengers was the fact that, more often than not, the team’s missions became uncomfortably public. This time around, S.H.I.E.L.D. is directly involved, which means secrecy is the name of the game. Maria Hill doesn’t have time for Hulk, Captain America, Thor, or anyone else that’s going to attract immediate attention on a team meant to carry out covert and ultra-classified missions.

Nick Spencer drives the point home with a giant REDACTED panel over some of the more specific—yet technically unnecessary—details of the mission parameters. Secret Avengers #1 does a nice job setting up the premise of this series in a way that doesn’t treat the reader like a child, which is hard when so many writers these days throw around plodding exposition like it’s going out of style. But showing readers that no one is to be trusted in this series is a whole lot better than hearing Nick Fury Jr. or Phil Coulson say something like, “Don’t trust anyone.”

The two major elements that sets this Secret Avengers apart from the previous iteration are that this team is S.H.I.E.L.D.-sponsored, and that the recruits don’t actually know they are part of the team. Marvel already went ahead and got themselves an African-American Nick Fury for the 616 universe, so why not an “Avengers Initiative” too? If it were done any less well, it would feel superfluous in an already clustered and highly populated comicbook landscape.

While the team is led by S.H.I.E.L.D. Director Maria Hill and Agents Fury and Coulson, any other recruit is injected with nanotechnology that wipes their mind once their mission parameters are met. Nick Spencer’s decision to use Hawkeye and Black Widow while leaving the bigger guns to the bigger books gives him room to breathe and really make this series his own. Already in this first issue, we see ulterior motives come into play that changes the scope of the series from what we’ve already been told. It’s a good thing, because the premise of the team members not being aware of their participation isn’t solid enough to stand on it’s own.

While the plot Secret Avengers #1 is enough to keep me coming back for more, the overall tone and characterization hasn’t won me over yet. Perhaps it was partly a result of Luke Ross’ often angry-looking facial expressions, or the general way about which Hill, Fury, and Coulson reach their ends, but there’s a much more sinister tone to this title than almost any other Marvel NOW! book—like a thrilling crime drama that could change course or present a major revelation at almost any turn, but in a way that will ultimately lead to pain and suffering.

If that sounds all gloom-and-doom, well, it kind of is—that’s the general air of paranoia that comes with reading Secret Avengers #1. And that’s before the final page that throws all perceptions into question. And while Fury and Coulson seem to have a much friendlier relationship between them (seeing as they are equals here as opposed to a boss-employee relationship in the film), they also just seem generally meaner and snarkier to everyone else. I do get it—they’re super spies and they do things a bit differently than you or I.

Secret Avengers #1 is a solid read. Spencer keeps a good balance of action and information sequences that reveals only what the reader needs to know when he or she needs to know it, and that’s the mark of any good spy thriller. S.H.I.E.L.D. is becoming something of a new entity as we deeper into the Marvel NOW! era, and Secret Avengers seems like the vehicle for that ongoing change.