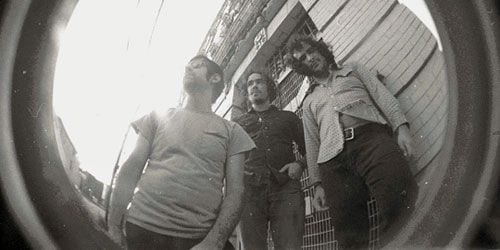 Before we delve deeper, let me be succinct — Purling Hiss’s new album, Water on Mars, is a good goddamn record. The Philadelphia trio of guitarist-vocalist Mike Polizze, bassist Kiel Everett and drummer Mike Sneeringer has crafted a retro-laden, conceit-free batch of songs that themselves accomplish a difficult feat — being steeped in the noise rock tradition yet simultaneously melodically appealing. Whereas groups such as Pissed Jeans and METZ champion uncompromising cacophony as an art form, Purling Hiss uses the din to inform their work, rather than relying on it and being so potentially alienating out of the gate. With Purling Hiss —not Hurling Piss, though that moniker wouldn’t be inappropriate in light of some of their sludgier tunes — a pearl of pop shimmers through the muck, their songs imbued with the type of sweetness you almost don’t notice until it has given you cavities.

If there is an overarching characteristic of Water on Mars‘s sound, it would be that its authors capture the essences of their influences, wrangle them down and smash them together in effective Frankenstein fashion. And greatly disparate are their beacons, with Dinosaur Jr. and early Pink Floyd, with a dash of Nirvana thrown in, being the most obvious reference points. This consistency, oddly enough, results in quite a diversity from song to song, the placement of Polizze’s voice in the mix, the atmospherics of the production and the dominance of either aggression or spacey effervescence varying among the cuts. Through it all, the trademark of Polizze’s searing guitar remains intact, as does the undeniable mood of simple fun that permeates the album. Even on the snotty agro punk of “Face Down”, there is a contagious feeling of non-self-serious enjoyment that comes through the recording.

With opener “Lolita”, the listener is assaulted with cement-mixing toil. Heavy and covered in dueling swaths of distortion, on first listen it is as brutal as a brick to the face. “Lolita, come back to me / Lolita, come along / I can see her / I can see her”, Polizze shouts like a foaming madman. Beneath all of the character’s eloquence and prose, is the collage of disjointed clatter meant to simulate the turmoil of lustful obsession raging in Humbert Humbert’s mind in the novel that shares the song’s title? The bedlam often gives way to Polizze letting loose with his J. Mascis-inspired guitar flourishes, prodigious as a chain dragging a 100-pound weight one second and spiraling into psychedelic solos and evocative fretwork the next, not infrequently squealing and wavering like a theremin.

Following “Lolita” are two ethereal cuts with outright sing-along choruses, the astrologically-titled “Mercury Retrograde” and “Rat Race”. In the former, the guitar seems to crank out solo after solo rather than a constant riff, yet the refrain of “I don’t know / I don’t know / And we can’t do anything” imparts a melody that will nestle deep in your subconscious. The only respite from the electric haze is the minute-and-a-half long “Dead Again”, a lurching acoustic mantra of “ooohs” and layered vocals. The transition back to guitar fuzz is handled marvelously with “Dead Again” being followed by “She Calms Me Down”, where the soundscape conveys a haunted forest vibe, a subdued aura put to great effect underlying the endearing lyrics of a woman’s tranquility-inducing presence.

The record’s title track, and its longest by far at more than seven minutes, is Purling Hiss’s finest display of their strengths. Like a Syd Barrett-era Floyd or John Cale-era Velvet Underground sonic freakout, the song features curlicues of guitar effects coiling out in every direction, Sneeringer’s metronomic drumming and what sounds like wildlife screaming. Competing distorted tonalities trade positions at the forefront of the aural pastiche, and yet somehow, the piece never feels plodding. The vocals don’t come in until the five-minute mark, but when they do, they instantly turn the feedback-drenched piece into a catchy little ditty. If you have one song to listen to in order to get an idea of what Purling Hiss is about, “Water on Mars” is the one you want.

While Purling Hiss may not being purveying unchartered territory on the musical map, it’s refreshing to see a band that can put out a very good rock record, one that is not mired by pretentiousness or a desire to do whatever it takes to cash in for popularity. In that sense, Water on Mars is a strikingly honest album, with the old school feel of having been played and recorded organically, warts and all.