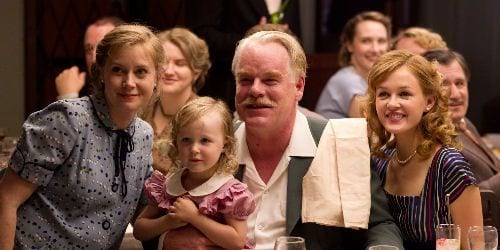 They’re called inner demons for a reason. Unlike the true mythic minions from Hell, who haunt us in moments of moral weakness, these creatures contradict our very human being. They destroy our psyche, contravene everything we believe about ourselves and our place in the world. Through exorcists like therapy and drugs, we try to rid ourselves of their unholy power, but in most cases, the efforts are for naught – or worse, complicated and ongoing. So when something like The Cause comes along, offering the promise of both freedom from said devils and continued clarity within one’s mind, it’s allure is incalculable. Toss in the spellbinding speciousness of a leader like Lancaster Dodd and you’ve got a cult waiting for its fodder. Someone like Freddie Quell fills that role quite effectively.

For filmmaker Paul Thomas Anderson, there is nothing more compelling than men in crisis. From the troubled gambler Sydney Brown in Hard Eight, to a down and out Dirk Diggler in Boogie Nights or a baffled Barry Egan in Punch-Drunk Love, his aesthetic eye is drawn to the traditional male role model torn, tormented, and twisted. Sometimes, it’s a son (Tom Cruise) unable to communicate with his dying dad (as in Magnolia). In other instances, it’s an oil baron unable to see the familial forest for the despotic trees (There Will Be Blood). The same sensibility applies to his most recent work of unbridled brilliance, The Master (now on DVD and Blu-ray). In his two leads – a charismatic if trouble ’50s outsider ‘evangelist’ and a sailor whose clearly fallen from grace with everything, including the sea – we witness the continuing contradictions of the gender, while wondering why such stigmas ever existed.

Freddie (essayed in uncomfortable spastic spurts by an amazing Joaquin Phoenix) is having a hard time adjusting to life after the War. Having spent most of his time drunk and disorderly, he carries said vices over to his various attempts at reentering society. One night, he steals aboard a boat looking for a way out of recent trouble. He winds up under the tutelage of Dodd (a fantastic Philip Seymour Hoffman)

a self-proclaimed ‘writer, doctor, nuclear physicist, and theoretical philosopher.’ Along with his stoic wife Peggy (Amy Adams) and a large group of devotees, he is touring the country, applying his practices and hoping to inspire success, and sponsors.

Freddie is a fascinating case for the considered charlatan. Within the troubled young man is everything Dodd is trying to demystify while tweaking similar tendencies he sees inside himself. As they attempt to help each other, it’s clear that Freddie may be a lost cause…and for a man whose not used to losing, such a possibility is more than problematic. It’s a potential career killer. Along the way, we meet the son who sees through his father’s ruse, the various members of Dodd’s dedicated financial support group, and the forces flitting around the fringes who are out to debunk the man and his ‘made-up’ mission.

While some have suggested that this is nothing more than a veiled Scientology screed (it has many allusions to the bizarre religion’s earliest earmarks), The Master is actually a movie about two men who couldn’t be more different, and yet are almost exactly the same. While he holds himself to a supposedly higher level of learning, Dodd bonds with Freddie over a common compulsion – drink. As a matter of fact, the protégé pries his way into the inner circle via the ability to make a mean alcohol and various solvent based beverage. Like Prohibition era gangsters, Dodd and his newly discovered subject share a love of liquid escape, and thus begins a bond that will make everything about The Cause, and its crafty creator, even more convoluted.

You see, Anderson is not out to destroy the alien-based tenets of Scientology. In fact, this film feels like an attack on all “feel good” self-help-styled shell games like est. Dodd is clearly grasping at therapeutic straws, keeping those which work and tossing aside others as “antithetical” to his newer approaches. He’s an emotional opportunist, the kind of shaman who shares little because he knows he has nothing of value to offer. Instead, he’s an archeologist of pain, prying and prodding until he gets what we wants (or what his fledgling faith needs). Hoffman is perfect here, using his robust physicality and vulnerable demeanor to show the kind of short lease Dodd is on.

Phoenix is even more fascinating. His is a pure method turn, a semi-stunt loaded with quirks and tics. But there’s definitely a reason for such character surrealism. Freddie is seen as arrested – lost in harmful poisonous drink, desperate for sex, eager for a fight. The war has reversed any aging or maturity, turning him into a halting child via a mannequin of mannered meanness. He is ready to explode at any turn, taking any attack as wholly personal and unprovoked. But under Dodd’s determined provocation, Freddie begins to open up. Soon, he is sharing some of his past problems, as well as using the various techniques to tap into the supposedly hidden source of his inner turmoil. The last act, where Freddie turns from pariah to patient, truly show what the actor is capable of. In fact, everyone in the cast (including a steely eyed Adams) deserves kudos.

But as with any Paul Thomas Anderson film, the director deserves equal billing. From the languid shots of swirling seas to the pinpoint accurate period detail, The Master is a marvel to look at. Less stylized than some of his other films, Anderson uses the image as a counterpoint to all the internal flux. Settings seem tranquil until Dodd and Freddie arrive. Suddenly, they take on the feeling of a prison, or of a far too pretty asylum. Indeed, throughout The Master, Anderson offers up the visual inferences that lie at the heart of the movie’s message. Everything might seem the picture of perfection on the outside, from the cocktail dresses to the impressive family homes. On the inside, however, are things dark and disturbing…and distrustful.

Something like The Master is fascinating for what it offers up, and what it leaves behind. There are no trapped extraterrestrial souls, no nods to Lord Xenu or E-meters. On the other hand, it definitely explores the reasons behind someone seeking an alternative to traditional belief. As they would for the next five decades, the post-war world needed something more than God and Church to explain the horrific nature and consequences of man against man. Something like The Cause (or its Scientological cousin) found a way to swoop in and fill that gap. Instead of preaching faith, it argued for more practical ways to deal with said demons. For Lancaster Dodd and Freddie Quell, the journey may treacherous and tiring. For us, however, it’s the height of cinematic splendor.