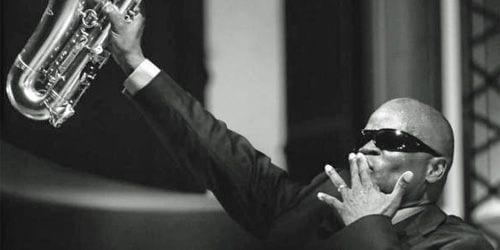 It’s kind of fun to imagine the myriad of children who were conceived to the funky, sanguine jiving of Maceo Parker’s sax. Saturated in sex and suffused with sensuality, Parker’s playing caresses your brain like velvety-soft singers gently stroking every inch of you at once. Parker created a seminal, singular sound—the funky soul of James Brown’s late ’60s/ early ’70s output, including Sex Machine, and the would-be blaxploitation soundtrack The Payback, owes much to Parker. James Brown’s barbaric yawp is the core of every James Brown song (obviously), but Parker helped create that dense sexy aura; lesser musicians wouldn’t have been able to stand up to Brown, but the magnanimous funk of Parker and co. collides with Brown’s bombast like two violent lovers; the ensuing fornication is aural ecstasy.

Mace parker plays with fervor; he carved his own niche in the soul-funk world, and that niche bloomed and bloated and swelled into the standard of all soul-funk. On Parliament’s breakthrough album, Mothership Connection, P-Funk’s first album to feature Parker, the sultry sounds of George Clinton’s funky frenzy melded with a more pop-oriented sentimentality; whereas Funkadelic delved into darkness with their masterful mind-melter Maggot Brain (which features the ten-minute title track, really just one long serpentine, hazy, drug-fueled guitar solo by Eddie Hazel doing Hendrix via LSD—funk’s own “A Love Supreme”), Parliament went straight for radio towers. They didn’t so much veer into the mainstream as much as they punched a hole in the mainstream and made their own little nest: black people in outer space, Clinton described the album—“The Bomb”.

The album, as is the case with pretty much all P-Funk stuff, is an amalgamation of sounds. No one instrument takes over or usurps any other. Parker doesn’t really shine like a single bright burning light on Mothership Connection like other iconic sax men, e.g., Coltrane; he mingles with Fred Wesley (also of P-Funk) and the brothers Michael and Randy Brecker (known for their work with Todd Rundgren and Lou Reed), creating an aural entwinement. This is baby-makin’ music.

And this is why Parker’s slim autobiographical 98% Funky Stuff is such a strange disappointment. Parker’s musical career has been permeated by such fervid, funky stuff, that his writing is… bland? Boring? Banal? All of the above.

“It’s the fall of 1963, and I’m nineteen years old,” Parker begins the book. “I’m standing out back of the Colisuem in Greensboro, North Carolina, during intermission, trying to catch a glimpse of my idol, Ray Charles.” At first it sort of seems like Parker is displaying false modesty—setting up a loud, boisterous book with a bit of pedantic prose; he’s going to compare himself to Ray Charles, you can safely surmise, so of course it only makes sense to start slowly, literary foreplay. But Parker’s brief meeting with Ray is oddly distant and detached and not in a dreamy way: “One of these days you’re all gonna know me,” he says, but his words just feel like words typed onto a page. There’s little emotion here. He likes Ray Charles. Oh boy. Exciting. Apparently musical prowess doesn’t easily translate into writing because his verbiage is soporific, where his music is hypnotic. His sax leads to sex; his prose might make you doze.

Here’s Parker setting up an anecdote of his amateur band being asked to play a house party with some “Good Old Boys” who aren’t so fond of young black men:

One night after the show, a young man approached the band with an interesting offer.

“Do you guys have to be home by a certain time?” he asked us.

My brothers and I didn’t have a curfew, so we told him we were in no rush.

“How would you guys feel about coming back to my house and playing there for me and my friends?” he asked.

Nobody really spoke up because we were all thinking the same thing. We didn’t know this guy and weren’t convinced going out to his house as a good idea. Still, he wasn’t drunk and seemed nice enough, so we entertained the idea.

After a few minutes of listening to us talk indecisively amongst ourselves, the guy blurted out, “I’ll give you five dollars a minute.”

That phrase stopped everyone cold.

“Are you serious?” I asked him.

The young man assured me he was, so I did some quick math in my head and figured out that he was talking about three hundred dollars an hour. That was some serious money.

This detachment, an emaciated linguistic simplicity so devoid of feeling it makes you appreciate the terse exactitude of Raymond Carver and Heminway, lingers throughout 98% Funky Stuff. Parker spent years traveling with James Brown—James Brown! The man who stormed a stage in a sequin cape and secreted flair and flamboyancy and demanded that his band mates wear bowties, patent leather shoes, cummerbund, who would sabotage his opening act if he felt they were upstaging him, who created funk and helped lay the groundwork for rap. And Parker’s description of Brown possess less insight and livelihood than a newspaper advertisement:

“I can play the saxophone,” [James Brown] said flatly.

I stood there stunned. I thought maybe it was some kind of joke, but he didn’t laugh…

“I’m serious. I can play the saxophone standing on one leg,” he said, grinning. “I can play it spinning around, all up on my back, down on my knees—all of that. If I started playing saxophone, you’d be finished. Do you understand?… I just wanted you to know that,” he said with a smile and then strode offstage.

98% Funky Stuff isn’t even 200 pages long, so for $26 you’re paying more than a dime a page. You can finish the whole book in an hour if you’re so inclined, but you wouldn’t learn much. Why Parker didn’t get someone else to write his memoir for him is beyond logic. The book stands as yet another testament that writing is not easy: celebrities who think they can quickly pen a memoir and create a masterpiece are delusional.

It’s like if Jonathan Franzen picked up a sax and started a jazz band. Actually, I would totally pay to see that.