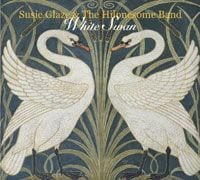 Susie Glaze & the Hilonesome Band continue to hone and refine their brand of rootsy Americana on their very appealing new album, White Swan. Alison Krauss and Union Station remain the most obvious reference point for this troupe which comprises Glaze on lead vocals, guitars and mountain dulcimer; Rob Carlson on guitar; Steve Rankin on mandolin and bouzouki; Mark Indicator on fiddle; and Fred Sanders on bass. But with White Swan, the band have broadened their bluegrass sound to encompass folky Celtic elements, and the results stand up well alongside the best of AKUS.

The playing throughout is supple and evocative and the choice of material is stellar, combining original (mostly penned by Carlson), traditional material and well-chosen covers. The Irish tune “Si Bheag, Si Mhor” ushers in a fine opening take on James Taylor’s “Mill Worker”; Glaze channels Joan Baez for a gripping “Fair Ellender”; Rankin takes a low-key lead on a cover of Steve Earle’s “Me and the Eagle”; and a spare, evocative reading of “The Soldier” by Jean Ritchie (about whom Glaze composed the acclaimed theatre show “Singing the Moon Up: The Voice of Jean Ritchie”) brings the album to an elegant end. The best tracks, however, are two stunning songs from the pen of Ernest Troost: the murder ballad “Evangeline” — sung from the perspective of the now-remorseful culprit — and the exceptional “Harlan County Boys” which economically traces a family history from the early 1900s to the present day. Glaze inhabits these songs with absolute conviction and subtle dramatic flair, making them the highlights of an altogether beguiling record.