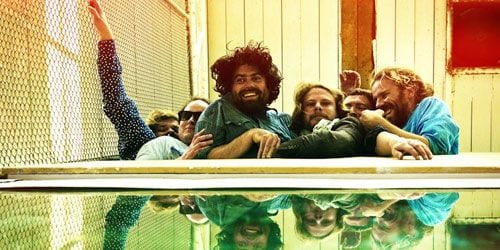 That is what you want to tell the guys in the Phoenix Foundation in response to Fandango, their fifth album. The Phoenix Foundation’s previous album, Buffalo, was one of the best indie rock releases of 2011. But its often whimsical, easygoing, pastoral tone was also slammed by some reviewers as being shallow or, worse, boring.

Fandango trips over its feet trying to move too far in the opposite direction. It is a two-disc, double album that has twelve songs on it. Do the math and you’ll find that, yes, this is a prog album in the classic sense of that term. Band leaders Luke Buda and Samuel Flynn Scott have created a sprawling, high-minded set that is shameless in its ambition and scope. While Buffalo was full of good vibes and often comforting, Fandango is creepy and often disturbing. While Buffalo tracks like “Pot” were Phish food for the soul, Fandango tracks like “Black Mould” are bad acid for the mind. If some felt Buffalo was slumming it, Fandango tries too hard.

All of this would be fine, admirable even, if the songs themselves stood up. But for the most part they don’t. Despite all the foreboding sound effects, changes in tempo, twists and turns, only a few tracks take hold. Single “The Captain”, relatively concise at just under four minutes, is shimmering, heartfelt synth-pop that is reminiscent of the early ’80s work of fellow countrymen Split Enz. “Supernatural” and “Walls” are as close as Fandango comes to the sweet, carefree nature of its predecessor. “Sideways Glance” tries but falls short. Somewhat ironically, these tracks are more prone to the kind of criticism leveled at Buffalo.

And that leaves the swampy morass that is the rest of Fandango and gives it its overall tone. Far-Eastern-style droning. Birdsongs. God, evolution, mumbled vocals. The good ideas are sabotaged by questionable ones. “Inside Me Dead” is all moody resignation and processed guitars and is pretty effective in its downbeat way, with an emotive chorus even, but then it suddenly takes a left turn into a dark, dank cave where not much is happening. “Corale” is a pretty if new age-ish fingerpicked acoustic instrumental until it undergoes an overblown, thundering descent into something Rick Wakeman might have worked up several decades ago. A lot of stuff is thrown into the pot, but what, exactly, is cooking?

At least the future-retro “Thames Soup” manages to strike a balance between freak-out and chill-out, between shiny surface and murky depth, suggesting a possible way forward from the band. The dragging, shape-shifting, 17-minute “Friendly Society” certainly isn’t it. Or maybe Phoenix Foundation need to take a step back. “Golden Ship”, Buffalo‘s epic, majestic closing track, demonstrated the transportive power the band can conjure with guitar effects and some well-conveyed maritime-alien imagery. Too much of Fandango is stuck in muck.

In one of Fandango‘s few bits of light-heartedeness, Buda and Scott sing “See that dude there / …forgotten how to rock”. The Phoenix Foundation never really were a rock band. But Fandango just doesn’t roll often enough.

RATING 5 / 10
FROM YOUR SITE ARTICLES