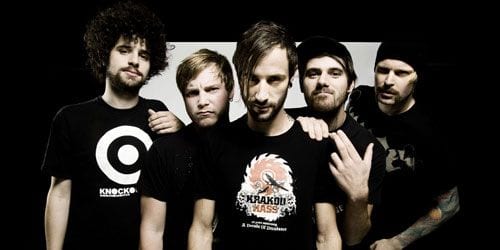 There is a vast, inscrutable difference between a CD and an album. A CD is comprised of piecemeal songs that can be played in any particular order. Some can be skipped. Others can be fast-forwarded to the hook. Some can be played repeatedly, and others not at all. An album — that is another beast altogether. An album is whole. It is an experience. And in that experience, there is no component that can be left out, nothing that can be passed over. Berlin, Germany’s the Ocean has a massive album on its hands with Pelagial.

Pelagial is a concept album based on the different layers of the ocean, moving from lighter to heavier music as you go deeper and deeper into the abyss through the five pelagic zones. Originally intended to be an instrumental album due to a vocal disorder suffered by Loic Rossetti, words were added at the 11th hour after the music had already been laid down in the studio and Rossetti managed to recover. And it’s a good thing, too, because it’s hard to imagine the music without the voice. Though the album is offered as a two-disc set, one with the instrumental tracks, it is Rossetti who adds the storyline and a tangible layer of emotion to the fathomless depths explored by guitarists Jonathan Nido and Robin Staps, bassist Louis Jucker, and drummer Luc Hess. During the course of the album’s 53-minute runtime the music slows to exemplify the increasing pressure, isolation, and darkness, moving from the lighter elements of Cynic to the darkest corners of Neurosis’ catalog.

Lyrically, Pelagial moves from the seemingly blunt to the outermost corners of the abstract. This compels a close listen, as descriptions of the surrounding conditions give way to more obtuse, poetic passages, and back again. From the outset we are drawn into a world the Ocean have created, an undersea epic that they have envisioned and executed to the utmost of their artistic and creative abilities. Pelagial is no mere attempt. It is an execution born of the highest level of planning and forethought. In the sea of entertaining but disposable pulp fiction that is metal at times, this is the tome that restores faith.

Doom, progressive death metal, classical strings. There are elements of all of these intermingling on Pelagial, not vying for space but finding the space between one another in which to augment and strengthen. Such an undertaking is no mean feat, but one that should be expected from a band as persevering as the Ocean. This is the same band, led by Staps, that went through a reported 40 musicians in its first two years, as the guitarist searched for the right combination of people to take the band’s music where it needed to go. Now, 13 years later, we see what he went through all of that for with this monumental release. Pelagial is one of those rare releases to inspire multiple consumptions of the entirety, where new nuances can be discovered with each listen.