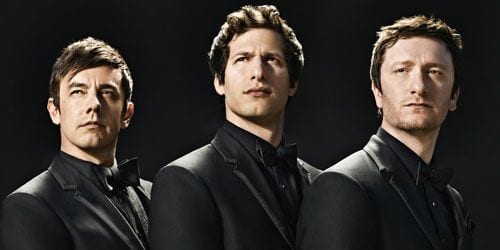 There are only two ways to go with this review: The high road or the low road. In a small effort to not reiterate many quotable trash-talkin’ lyrics, frequent profane comedic diamonds and straight-up gangsta flow (thus ruining the surprise for those who haven’t saved the Lonely Island’s YouTube playlist at some point in the Windows 7 era), I’ll advise those further interested to experience The Wack Album for one’s self. I cannot foresee finishing this review without pilfering at least one or two lines while we’re along for the ride, but don’t say you haven’t been warned. It’s dirty as hell, and you’re gonna laugh your ass off.

I knew what to expect when I received this assignment. Saturday Night Live has been a lifelong tradition of sorts, and I’ve followed just about every lineup since the original “Not Ready for Prime-Time Players”. One thing that has remained constant throughout the history of SNL has been the incorporation of music into the comedy, from the Blues Brothers all the way to the Lonely Island. Adam Sandler’s “At a Medium Pace”, Eddie Murphy’s “Boogie in Your Butt”, and Steve Martin’s “King Tut” all set the bar high for future SNL cast members’ comedy record attempts, and many have failed along the way because we have these aforementioned crown jewels of audio comedy to compare everything else to. Luckily, a couple of notches to the funny bar have been added with The Wack Album, although it’s definitely a rap experience. In fact, it’s some of the dirtiest rap out there. SO dirty, even Blowfly would blush… a little. That could end up being a double-edged sword for the Lonely Island, alienating the comedy fans who despise hard rap music. But millions upon millions of fans can’t be wrong. Just remember, it’s shtick. It is what it is. Still, when you’re hit with (and I paraphrase) “The Lonely Island were beaten to death with their own ‘junk’ outside a strip club” within the first 60 seconds of The Wack Album, you’ve gotta give it a genuine laugh. Just like you did when you first heard Adam Sandler’s “At a Medium Pace”. Even if SNL Digital Shorts and toilet humor in general are your forte, honestly… could you see that one coming?

There’s a trend currently making it’s way through pop culture, thanks to the Lonely Island, the SNL Digital Short and YouTube. Comedy in rap through social media has made international superstars out of Macklemore and Lewis with the viral explosion of “Thrift Shop”, kept us for being productive corporate busybodies with the YouTube sensation “I’m on a Bike”, and made Andy Samberg a hipster icon. All of the above mentioned are making these poignant critiques and delivering them through comedy, so the listening audience gets the best information absorption rate possible. Better than the nightly news. Better than even TMZ. Take note, NPR. No one listening to The Wack Album is yawning, and they’re learning a lot.

Macklemore’s observation on the new generation’s discovery of all things second-hand is funny, but Samberg is the master of comedic cultural criticism, dropping honest views of social trends in the modern world innocuously amidst fart jokes and gangsta beats. “I got that diaper money” says so much about a few of today’s urbanite subcultures within those five little words. In the ‘never gets old’ word substitution department, the Lonely Island swaps the word ‘hug’ for whichever dirty verb pops into view first, but throws a barbed quip towards the soccer mom with “I wanna hug your mama in a Subaru hatchback.” I mean, damn. “You’ve Got the Look” is song about ogling a girl with one breast hanging out of her top, but twisting it into a cultural statement, asking the question “Is it a mistake, or is it fashion?” What’s your take on that, Janet? That’s brilliance within itself, then the vocal refrain from Hugh “Wolverine” Jackman comes in, and the realization you’ve just been one-upped unabashedly intensifies the guffaws and snorts. It doesn’t help the situation when Kristen Wiig gives answer to the call with “one ball out”. That’s just downright devastating to the undies.

SNL favorites “YOLO” with Adam Levine and Kendrick Lamar and “3 Way” with Justin Timberlake are here, and having those cuts in high quality without the laugh track makes a great argument for shelling out the Lincolns and Washingtons on Wack, but Wack is more than just critical commentary, raunchy comedy, and greatest hits. It’s also a loving tribute to hip hop, giving nods to some of the cherished moments in the genre. “Spell It Out” shamelessly channels K-Solo’s “Spellbound”, “We Need Love” is an obvious ode to LL Cool J’s “I Need Love”, but also tips its hat to Digital Underground’s “Freaks of the Industry”. “Perfect Saturday” has got a lot of love for Cali, breaking down Snoop’s style over a formulaic revisiting of Ice Cube’s “It Was a Good Day”, then turning it’s focus onto what could be the start of a new trend… the gangsta fart joke. There are a couple of throwaways scattered among the thoughtful. “The Crew” and “We Are a Crowd” don’t come off very well, but two out of 20 ain’t bad at all. In fact, let’s do some simple division and determine the rating for The Wack Album on the PopMatters scale based on the amount of filler.

It is what it is.