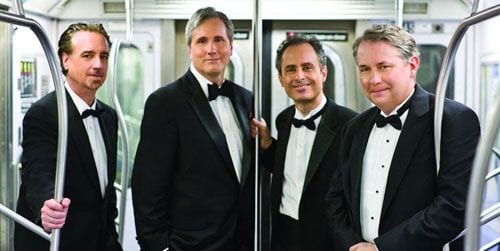 In their almost forty years together, the Emerson String Quartet has released over 30 albums, earned nine Grammy awards, and toured the world countless times. This year, the quartet experienced its first change in personnel since 1979, as cellist David Finckel leaves the group and is replaced by Paul Watkins. But for their last recording together before the shift, the Emerson String Quartet has released one of its boldest albums to date. Branching out from their more mainstream repertoire, the quartet has programmed two out-of-the-box pieces for Journeys (out-of-the-box for their standards, at least; most people would hardly find anything shocking in these two well-known and oft-performed pieces). Augmented by violist Paul Newbauer and cellist Colin Carr, the album juxtaposes two late-Romantic string sextets, Pyotr Ilyich Tchaikovsky’s Souvenir de Florence and Arnold Schönberg’s Verklärte Nacht.

The two pieces, both written in the last decade of the nineteenth century, represent a turbulent time in musical history, particularly in regards to musical form and tonality. Seemingly at opposite ends of the spectrum, the Tchaikovsky sextet is a more traditionally structured piece with a more coherent sense of tonality and the Schönberg is a freer composition in both senses. But this pairing by the Emerson String Quartet does well to illuminate the similarities these works share. The sense of anxiety, of searching, of overwhelming melodic beauty and lush, warm chords. Both pieces feel like, well…a journey.

Despite its title, Souvenir de Florence was actually only partially composed while Tchaikovsky was in Italy. Its Italian influence can be heard in the lyrical melodies of the slow movement, but a strong Germanic structure and a Russian spirit also permeate the work. In this sense, the piece embodies a physical journey throughout the musical landscape of Europe, which, as technology and industry increased, began to feel smaller and smaller. The piece seems to be trying to negotiate the colliding musical worlds and the changing views on structure and harmony of the time.

Verklärte Nacht, or “Transfigured Night”, was Schönberg’s first major work, and is widely considered one of the masterpieces of late-Romanticism. Based on a poem by German author Richard Dehmel, the piece acts as a symphonic poem scored for string sextet, using its extended single movement to move through contrasting material and follow the emotional arc of the poem’s narrative. The poem tells the story of a man and woman walking through moonlit woods. She has become pregnant out of a longing for motherhood, but does not love the father. Now that she has found a man she loves, she feels regret and sadness for her actions. But the man forgives her, and tells her that their love and the magic of the woods will transform the child to be his and that everything will be alright. Schönberg’s programmatic musical representation captures the intense emotional climate of the poem. His harmony and orchestration point towards his later developments and are uniquely colorful and exciting. Whereas the Tchaikovsky represents a physical journey this piece embodies a psychological and spiritual one.

Another “journey” can be found between the two pieces. Both works are centered in D minor, and the musical and emotional arc over the whole disc is impressively coherent. Despite their differences in musical approach and style, these two masterworks are connected spiritually. Aside from the obvious fact that both pieces are composed for the same instrumentation, they are both concerned with the changing musical landscape, the exciting shift from Romantic expression to Abstract expression and Modernism. Tchaikovsky, who was at the end of his career, composed a piece filled with anxiety and tension about this shift, while Schönberg, who was only beginning his career, seems joyous about the possibilities of uncharted musical ideas. Going from one view right to the other creates a powerful narrative for the album.

The playing, as to be expected from the Emerson String Quartet, is highly detailed, passionate, and technically flawless. Their playing emphasizes the similarity between these pieces, leaning on the more dissonant passages of Souvenir de Florence and bringing out the warm sonorities of Verklärte Nacht in an attempt to have them meet closer to the middle. As a final statement before the group itself “transfigures”, Journeys eloquently expresses anxieties about leaving the past behind and excitement in what the future brings.