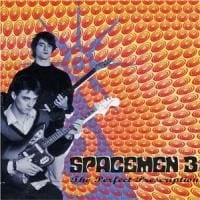 If there was ever a time or place where Spacemen 3 were going to fit in, it wasn’t in Rugby, England in 1982. Post-punk was going strong (and turning into new pop) but Spacemen 3 weren’t so much that as post-Velvets, post-Stooges, post-Suicide; an alternate history where Pete “Sonic Boom” Kember and Jason “J Spaceman” Pierce are as epochal a creative partnership as (say) Jagger/Richards would have to feature those bands and like-minded others (like the MC5, the Red Krayola, and the 13th Floor Elevators, just to mention acts they covered) much more prominently. Of course, given the band’s prodigious volume of both drug-taking and drug talk (the latter mostly by Kember) there may have been other barriers to achieving anything more than subcultural fame.

Eventually the band would be lauded in the UK press, but these reissues depict the early days; when they were first known as The Spacemen before they decided that sounded too ’50s and added the three either for the third eye or the fact that they were a trio after the bass player quit. Before Kember started barring Kate Radley (Pierce’s partner at the time and later bandmate) from the tour bus and claiming the band was his design in interviews; before Dreamweapon and Playing With Fire and acclaim and 45-minute versions of “Suicide” and the cancelled US tour and collapse and Recurring and final disintegration and Spectrum and Spiritualized, which at first was just Spacemen 3 without Kember and the only way fans would get to hear Recurring material live. These three records, originally for the Glass label, represent the bulk of the output of the version of Spacemen that were still unified.

Sound of Confusion may not have come out until 1986 but it still feels like the band in its infancy now. Fittingly for a group that made a demo before they’d played ten gigs, it feels like they put out a record as soon as they had forty minutes of material. That’s not to say it’s subpar; only three of the seven songs are originals (with three acknowledged covers and a blazingly drawn-out rip of the Stooges “TV Eye” on the closing “OD Catastrophe”) but the performances are fully formed. The band had already started writing less monolithically heavy songs but this album was the result of a conscious decision to include their heaviest material. The 13th Floor Elevators/Juicy Lucy/Stooges covers that form the middle of the album are fun as hell and benefit from the layers of guitar snarl and drone coating everything, but it’s the more original material that really stands out. “Losing Touch With My Mind” is a perfect beginning to their recorded career, a cycling wave of feedback only eventually being beaten back by the classic garage rock riff ‘n stomp of the song proper. The lyrics could apply equally to the deranging/redemptive qualities of love, drugs, God, noise, or all of them. That blurring shows up even more strongly on “Hey Man” (aka “Amen” on some compilations), the first indication of the gospel/devotional influence Pierce would use to such great effect with Spiritualized (despite remaining rather pointedly unsaved). The skyscraping “Hey Man” and scuzzy, stomping “2.35” showed that Spacemen 3 could do a lot more than just emulate their chosen (and, especially at the time, slightly obscure) forebears.

But although Sound of Confusion is great, momentous heavy psych/garage rock, it (again, deliberately) only shows one side of the band. There’s a kind of negative transcendence to be found in its muscular, inexorable riffs, but that’s not the only kind of transcendence Spacemen 3 were looking for (or indeed, finding). As good as their later work was, in some ways 1987’s The Perfect Prescription is the very peak of Spacemen 3, an album that can stand easily with the very best rock music ever created about the drug experience (or, again, all those other things Kember and Pierce were so good at conflating with it). You could consider it a concept album; there’s only the narrator and the listener he’s addressing, but there’s a definite sequence of events. It opens with, in “Take Me to the Other Side,” both the closest thing to their earlier work found here, and an absolute masterclass on how to construct the kind of rock song that makes listeners believe in the power of a rock song. Pierce sounds like he’s singing in the middle of a hurricane; there’s a shimmering overlay on everything without the result sounding anything less than surging, scummy, storming. It’s the flipside of “I’m Waiting for the Man” given a kick in the pants, the kind of thing that makes bullshit clichés sound like the truth.

From there things go up and up, at least for a while; the narcotic hum of the organ on “Walkin’ With Jesus” (which gave the previous album its name despite being saved for this one) is practically beatific, while the lyrics exhibit flashes of the same kind of mid-hit mindset John Darnielle would nail so precisely on the Mountain Goats’ great “Quito.” The Lou Reed homage “Ode to Street Hassle” is if anything calmer, bridging the gap to the permanent high of “Ecstasy Symphony/Transparent Radiation (Flashback)” with a rollicking little melody and Kember’s plainspoken monologue. The latter track marries a gorgeous Red Krayola cover, sung with hushed devotion by Kember, with a glacially beautiful drone piece that’s almost a mood-altering substance in itself. As that ebbs away, we’re left with the murmured coos and faraway saxophone drone of “Feel So Good”; the album itself is so high by this point it can’t be reached, an endless, helpless high where you can’t move anymore and you don’t care. Time dilates into an featureless sameness and as long as it feels like this, well, that’s just fine.

Naturally enough, for the denouement we come down hard. The title of “Things’ll Never Be the Same” refers not to some sort of mind-expanding experience but the squalid, desperate search for the purity of your first hit; for the first time since the opener the frazzled, bad-vibe feedback has returned, curdling the mood and not even having the decency to achieve catharsis for minutes on end. There’s a savage, bitter sarcasm in Pierce’s vocals as he talks about putting some love deep in our veins. The air has cleared a bit for the folk blues of “Come Down Easy,” modeled after Dylan’s version of “In My Time of Dying.” “1987, all I wanna do is fly…” but it’s a free-fall (and the narrator knows it); the closing, mournful “Call the Doctor” depicts at best an arrest, at worst a death. Kember and Pierce would never work together like this again; Sound of Confusion was more a genre exercise than anything else, but this is harrowing and exultant in turn, mordantly funny and bleakly depressing; an absolute classic.

It also fulfilled the number-of-albums part of their contract with Glass, but they were still signed for another year and were eager to move on; they wound up releasing a live album through Glass in return for freedom. Given the circumstances, it wouldn’t be surprising if Performance was lacklustre, but instead it’s ‘only’ as good as Sound of Confusion was. There are few surprises here; except for a great cover of Sun Ra’s “Starship” in the style of the MC5’s own version and a freakout called “Come Together” that bears no relation to the Beatles, Primal Scream, or Spiritualized songs of the same name, all the material is from those first two albums. But the sound is great; “Take Me to the Other Side” is, if anything, even better here than on record, sounding like the kind of standard that a dozen bands could (and should) cover, and “Rollercoaster” sounds like it’s about to collapse the roof.

For a long time, Spacemen 3 records were hard to find, especially in North America, and they had the kind of checkered, inconsistent release history that meant that all of these releases usually show up here with a seemingly random assortment of bonus tracks (sometimes to good effect; I will always have a sentimental fondness for the Taang! reissue of Performance that appends, among other things, a jaw-dropping version of Playing With Fire‘s “Suicide”). Now Fire Records, the label the band signed to after Glass, is reissuing the records in their original form on vinyl; as worthy as some of those bonus tracks are, the originals stand on their own just fine. As out of step as they were, Spacemen 3 never broke stride; from the very beginning they were unabashedly and compellingly their own thing. Even the most varied moments here only hit at the directions both songwriters would go in, but even the earliest material here is a peerless example of the endless possibilities of a riff, a backbeat, and a desire to go further, whatever the cost.