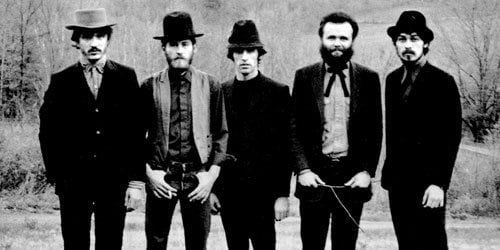 The Band
Live at the Academy of Music 1971
Universal

Live at the Academy of Music 1971 revisits the four-night residency The Band played leading up to New Year’s Eve of that year. Some of this material was originally released on the 1972 live set Rock of Ages, but more on that in a minute. First, let us revisit something that happened five years after these shows: The Last Waltz. The Band’s star-studded farewell show, as captured by Martin Scorsese, has gone down as one of, if not the best, concert films of all time. That reputation is well earned considering the excellent performances, the great guest spots, and even the most controversial elements, i.e. the fight for infamy between Robbie Robertson’s ego and the edited-out cocaine hanging out of Neil Young’s nose.

But for all its swan-singing, The Last Waltz turned out to be a great ode to the music itself and even to The Band’s influence, but not really to The Band itself. Taken as a stand alone document, Rock of Ages may have focused more on The Band as performers, but it also focused heavily on Allen Toussaint’s influence and the mythology of origin that came with his horn charts–all of which were, apparently, lost in the airport, causing Toussaint to rewrite them on the fly at Robertson’s Woodstock cabin. Still, it is a bracing live document, less the orchestrated extravaganza The Last Waltz was, but every bit as epic.

So one might wonder why, outside of completism or the economy of box sets, we might need another live document from one of the live bands in North America’s history. The truth is that this may be the clearest picture we have of The Band as, well, a band. This may be the document that puts the best spotlight on the alchemy that occurred when these players got together. It’s a story that unfolds slowly over this stuffed set, but as the picture takes shape (a better one than, say, Dylan’s painting on the cover of Music From Big Pink) we’re left with not just more versions of great songs, but the most clear-eyed argument for The Band’s sheer live force.

The set’s first two discs give us remastered takes of highlights from all four nights. Taken out of chronological order and bouncing from classics (“The Shape I’m In”), to takes famously accented by Toussaint from Rock of Ages (“Don’t Do It”), to lesser known live gems (“Smoke Signal”), the first two discs feel at first akin to The Last Waltz in their focus on song. But it’s worth remembering the long road that brought The Band to this point. They began by joining Ronnie Hawkins’ band one by one starting with Levon Helm. From there, of course, Dylan recruited them to tour Europe, where Helm would eventually leave, and they played not to the adoring fans of the Academy of Music but mostly to European crowds furious with Dylan’s change to electric music. Then, after the musical purging that is The Basement Tapes, Dylan’s motorcycle accident left the former Hawks to make their own records, starting with Music From Big Pink.

That road, from Hawkins’ rockabilly to Dylan’s thorny rock tours to their own material is one that sharpened their skills while widening their palate. And so these first two discs–once you sift through the familiar joy of “Up on Cripple Creek” or “It Makes No Difference”–do remind us of The Band’s songwriting prowess, but they also reminds us of The Band’s all-consuming musical style. To hear them repurpose a Motown classic like “Don’t Do It” without losing an ounce of funk while adding their own troubadour dust is still striking. To hear the gospel-serious sublimation of “I Shall Be Released” may make you unironically bust out your lighter in front of the stereo. The throwback rock of “(I Don’t Want To) Hang Up My Rock ‘N Roll Shoes” is as guileless and brightly lit as rock music gets. Sure, Toussaint’s horns still loom large, but recontextualized they sound more like a conversation between the band and the horns than between Toussaint and Robertson, so much so that you can feel the swing of the horns influence The Band’s playing on, say, Stevie Wonder’s “Loving You is Sweeter Than Ever”.

The first two discs, then, highlight and amplify the joys of Rock of Ages, keeping their eye very much on The Band. But this out-of-order track list, this ticking off of classics, becomes all the more vital when we get to the last two discs, which capture in full and in order the soundboard mix of the New Year’s Eve show. There’s something freeing about getting to this show after working through the first two discs. So, though we hear again songs like “The Shape I’m In” or “Across the Great Divide”, or non-album classic “Get Up Jake” (sometimes the same version, as discs one and two do dip into New Year’s Eve occasionally), this ragged and brilliant set–and its overall impact–shines through and over any one song. The bluesy funk of “Get Up Jake”–on record a quick romp–is particularly excellent in the context of the show, serving as a swampy link between the tight desperation of “This Wheel’s on Fire” and the country-rock muscle of “Smoke Signal”. It also strips away the mastering excess all over Rock of Ages, so the horns feel deeper in the cut and not slathered over the tunes like honey.

The entire show is perfectly arresting, as din of concert chatter and fan praise circles the music, and the soundboard mixes establish an intimacy between the listener and The Band’s playing. Nowhere in the group’s live recordings do we feel this close to the individual elements, to Robertson’s dynamic guitar hooks, to Danko’s serpentine yet sharp bass lines, to the protean flourishes of Garth Hudson and Richard Manuel, and to the soulful, shuffling pulse of Levon Helm underneath it all. This, in other words, is a snapshot of The Band at their most potent, their most connected, and their most downright entertaining.

Along with the 1969 Isle of Wight show they played with Dylan–included on the latest edition of Dylan’s Bootleg Series, Another Self Portrait–this is the second great live document from The Band this fall. But this one is different, this one is about rising out of the shadow of Dylan’s personality so The Band’s own personality and artistry get top billing. Despite all the anonymity implied by their name, or by starting as a backing band to Hawkins’ and Dylan at his most infamous, The Band were truly their own thing. Live at the Academy of Music 1971 shows that at every turn.

Both disc two and disc four recapture the encore from the New Year’s Eve show, in which The Band brings Dylan out to play excellent versions of stuff like “Down in the Flood” and “Like A Rolling Stone”. They’re great, scuffed-up versions–Dylan jokes on stage that they haven’t played “Like A Rolling Stone” in “16 years”–but what might be more telling is that they are not the most memorable moments of this box set. Bob Dylan, always the biggest musical presence in whatever room he’s in or whatever room he’s being talked about in, is overshadowed by the dynamic consistency of The Band’s cuts here. His contribution is a sweet epilogue to a story that, for once, isn’t his.

Live at the Academy of Music 1971 still celebrates the songs like The Last Waltz did, and it also shows their impact even today. Both Jim James and Mumford & Sons pay tribute to The Band in the set’s booklet, which shows the sheer breadth of the group’s influence, so much so that their twists on various musical traditions could lead to further explorations, some interesting (James), some middling (Mumford). That influence, though, is secondary to the true success of this box set. First and foremost, this release is here to remind us that this music wasn’t about Dylan, or about Scorsese, or about any of their famous friends, or even about any one player in particular. It’s about The Band. These discs should be played loud, but not to ramp up the cinematics. Rather, they should be played loud to highlight the intimate details, to convince you just how uniquely, impossibly good these guys were when they played together.